Construction Unemployment Falls to Lowest May Rate on Record

May 2018 not seasonally adjusted national construction unemployment rate fell 0.9% from May 2017 to 4.4%, the lowest May rate on record 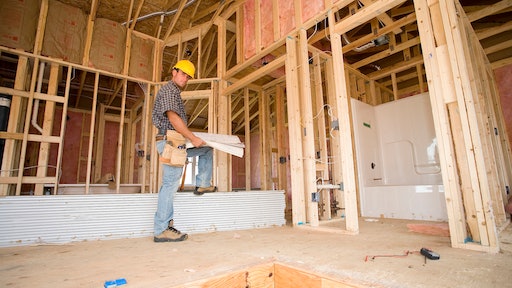 Estimated May construction unemployment rates fell in 45 states on a year-over-year basis, rose in four states and were unchanged in one state (Alabama), according to an Associated Builders and Contractors analysis of U.S. Bureau of Labor Statistics data. 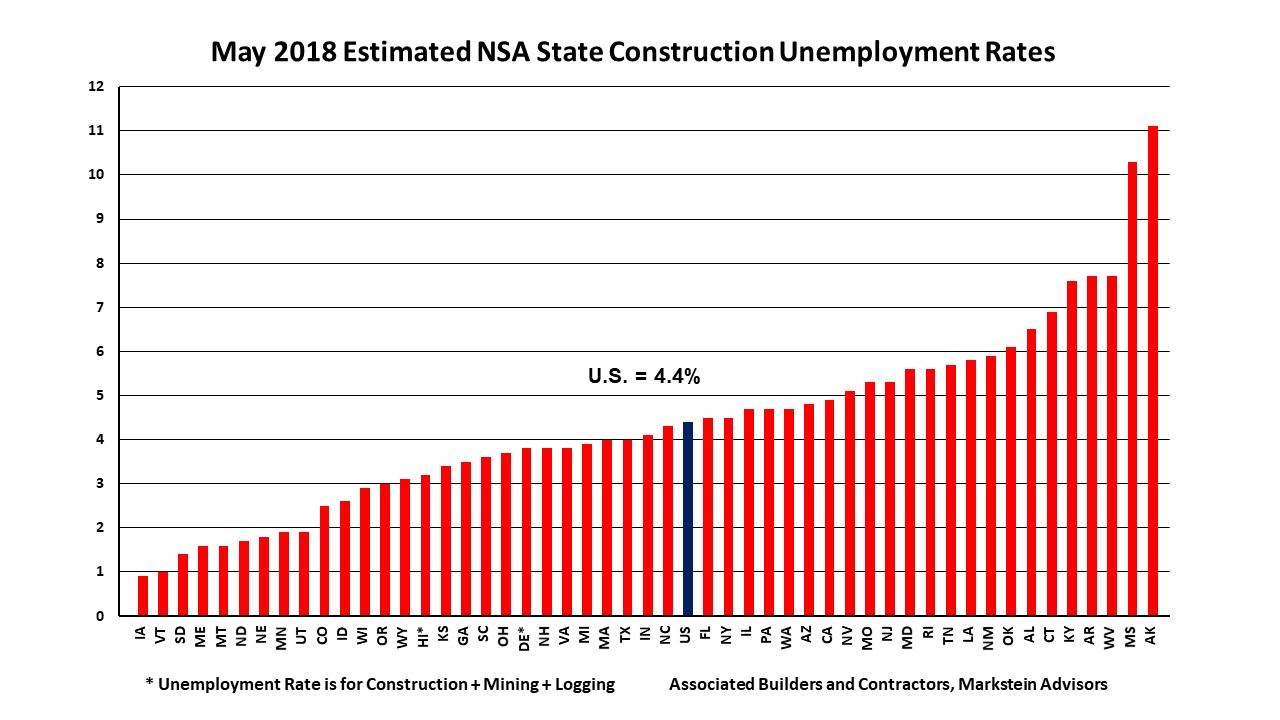 The May 2018 not seasonally adjusted national construction unemployment rate fell 0.9% from May 2017 to 4.4%, the lowest May rate on record. At the same time, the construction industry employed 291,000 more workers nationally than in May 2017.

“May proved to be an excellent month for construction employment, despite the ongoing shortage of skilled construction workers,” said Bernard M. Markstein, Ph.D., president and chief economist of Markstein Advisors, who conducted the analysis for ABC. “In addition, contractors are contending with a rise in building materials prices and the likelihood of further increases due to proposed tariffs on many inputs into construction.”

Because these industry-specific rates are not seasonally adjusted, national and state-level unemployment rates are best evaluated on a year-over-year basis. The monthly movement of the rates still provides some information, although extra care must be used in drawing conclusions from these variations. 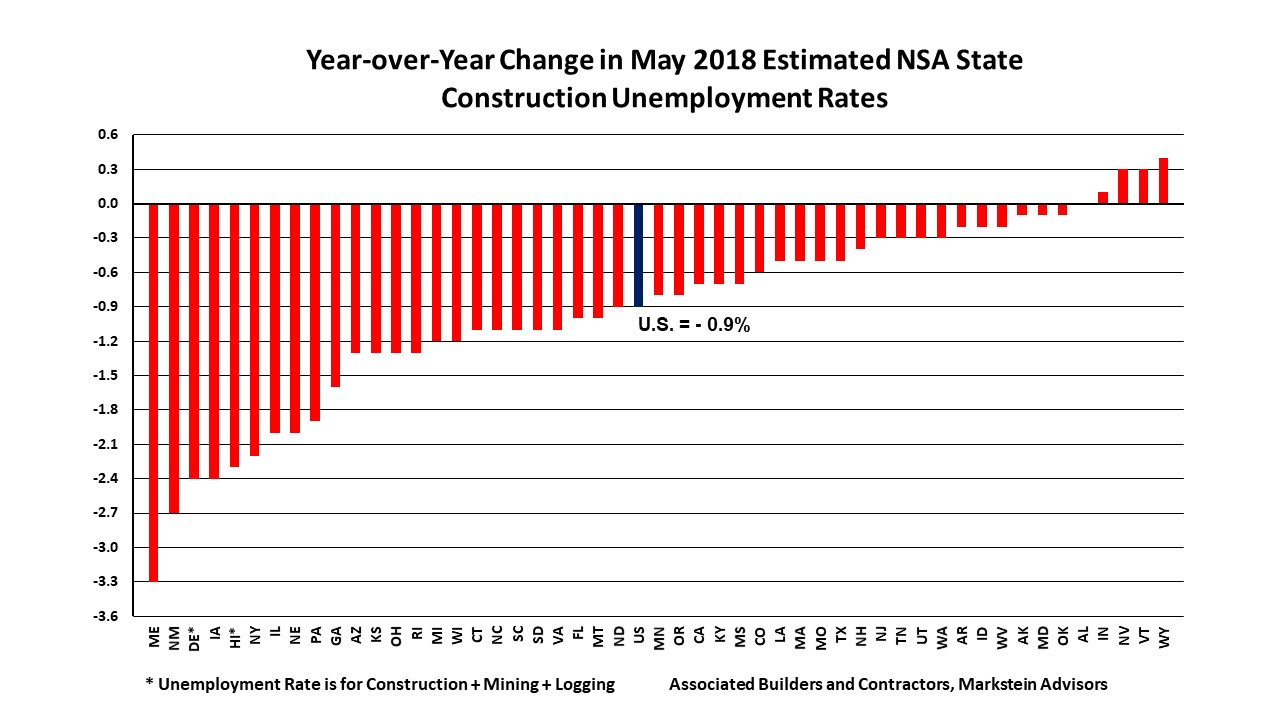 Two of these top states were in the top five in April: Iowa and Vermont.

Vermont had the second lowest May construction unemployment rate, up from tied with Utah for fourth lowest in April based on revised data (previously reported as sixth lowest rate). It was also the state’s second lowest May rate after last year’s 0.7% rate.

South Dakota had the third lowest May construction unemployment rate, up from tied with Kansas and Wisconsin for 11th lowest in April. It was the state’s second lowest May rate after the 1.2% rate in May 2015. 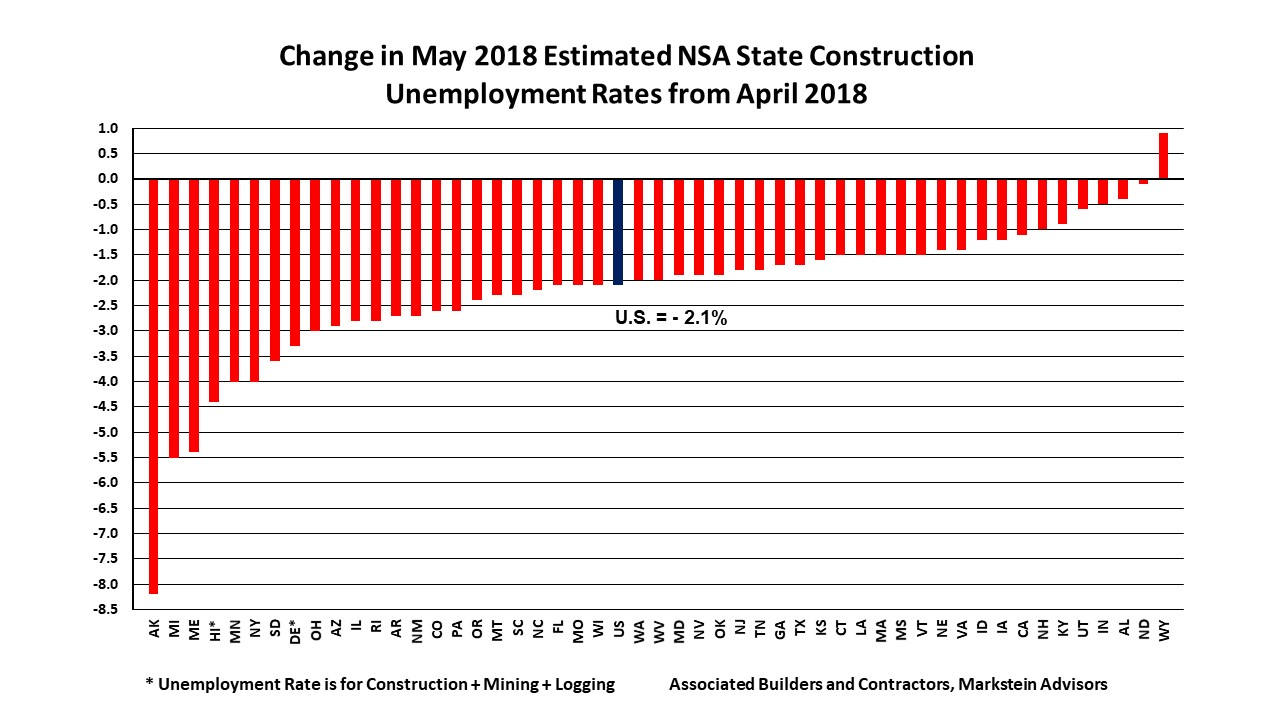 Maine and Montana tied for the fourth lowest May rate. For Maine, this was a significant improvement from tied with Nevada for 28th lowest in April. The state also had the nation’s largest year-over-year drop in its rate, down 3.3%, and the third largest monthly decline, down 5.4%. For Montana, May’s ranking was an improvement from eighth lowest in April. For both Maine and Montana, it was their lowest May rate on record.

North Dakota, which had the lowest rate in April, fell to sixth lowest in May, 1.7%. Nonetheless, it was the state’s second lowest May rate behind the 1.3% rate in May 2015.

Wyoming, which had the third lowest rate in April, dropped to 14th lowest in May, 3.1%. It was the only state to post an increase in its rate from the previous month (up 0.9%) and one of the only four states to see an increase in its year-over-year rate (up 0.4%).

The states with the highest NSA construction unemployment rates in order from lowest to highest were:

Four of these states — Alaska, Arkansas, Mississippi and West Virginia — were also among the bottom five states in April.

For the 11th month in a row, Alaska had the highest unemployment rate in the nation. Since these estimates are not seasonally adjusted, a high construction unemployment rate for the state often occurs from late fall through early spring. However, its May rate — its fifth highest May rate over 19 years — continues a troubling trend. Still, the state posted the nation’s largest monthly decline, down 8.2% from April.

Mississippi had the second highest rate in May — the same as in April — based on revised data (previously reported as the seventh highest rate).

To better understand the basis for calculating unemployment rates and what they measure, see the article Background on State Construction Unemployment Rates.