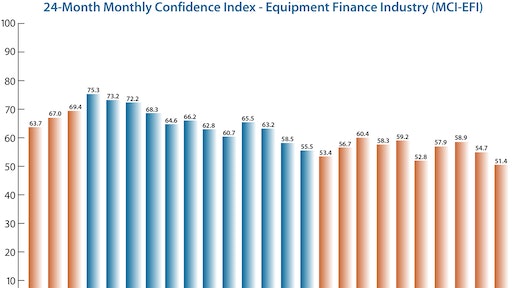 The October 2019 Monthly Confidence Index for the Equipment Finance Industry (MCI-EFI) came in at 51.4, a measurable decrease from the September index of 54.7. Released by the Equipment Leasing & Finance Foundation (the Foundation), the index reports a qualitative assessment of both the prevailing business conditions and expectations for the future as reported by key executives from the $1 trillion equipment finance sector.

“We still see continued demand for certain classes of replacement equipment,” noted survey respondent Valerie Hayes Jester, president, Brandywine Capital Associates, Inc., when asked about the outlook for the future. Yet, there is cause for concern. “Our customers who have any cross-border interests seem to be postponing acquisitions due to uncertainty with trade issues and tariffs. The recent events in Washington could provide some headwinds to a strong fourth quarter.”

When asked to assess business conditions over the next six months: 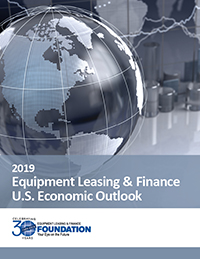 Equipment and software investment growth decelerated during the second consecutive quarter and is expected to moderate at 3.9%, according to the Q4 Update to the 2019 Equipment Leasing & Finance U.S. Economic Outlook. This is unchanged from the Q3 Update of the Economic Outlook published in July.

Overall, the economy is expected to expand 2.2%, down from the previous estimate of 2.5%, with growth driven primarily by consumer spending.

“While we continue to expect both the overall economy and equipment and software investment to moderate this year, they should remain positive,” said Jeffry D. Elliott, foundation chairman and senior managing director, Huntington Equipment Finance. “Measures of consumer optimism have declined in recent months, though remain high by historical standards, reflecting a strong labor market and solid wage growth.”

Highlights from the report include:

The Foundation-Keybridge U.S. Equipment & Software Investment Momentum Monitor, included in the report, tracks 12 equipment and software investment verticals. In addition, the Momentum Monitor Sector Matrix provides a customized data visualization of current values of each of the 12 verticals based on recent momentum and historical strength. Momentum readings are below the long-term historical average in 8 of 12 verticals, however 7 of the 12 verticals saw recent momentum accelerate in October

Of those relevant to the heavy equipment market segment, over the next three to six months: