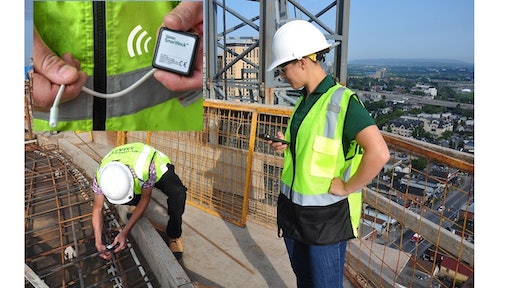 Low-cost wireless sensors are replacing the century-old practice to determine when a concrete pour has properly cured.

Stoneway Concrete sells Giatec concrete sensors to contractors and uses them in their own projects to gain a more accurate, more valuable understanding of concrete performance and to speed up their construction processes. 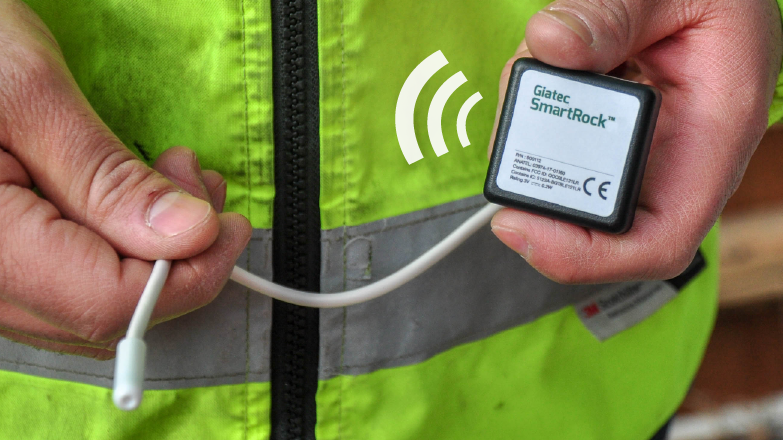 “Our customers have a need to know how their concrete is performing, especially at early ages of the concrete,” says Greg McKinnon, operations manager for Stoneway Concrete. “For commercial work, where they need to post tension and they are looking for a specified strength in a short period of time, they are able to monitor it and know the real-time temperature of the in-place concrete.”

Hurry up and wait

When contractors can’t properly determine whether concrete has made strength, they wait longer. This can lead to unnecessary project delays. On one project performed by a Stoneway customer, Giatec sensors accelerated the construction process and demonstrated the potential for inaccuracies that cylinder specimens bring to determining strength. On this project, the contractor poured a large mat foundation of 8 ft. to 12 ft. thick. The schedule called for erecting a tower crane on part of that footing in seven days. The Giatec sensors indicated that the in-place concrete had made strength in five days. The concrete in the test cylinders didn’t make strength in nine days.

Relying on Giatec sensors instead of the traditional testing cylinder method got the crane up five days earlier. Once the tower crane was erected, they poured their first post-tension deck. Giatec sensors indicated the deck achieved its strength target in just one day. The schedule allowed for three days of curing, and the engineer was a little apprehensive but allowed them to tension the deck after two days. The contractor saved one day for each deck poured.

Your flight is on schedule

Historically, the Federal Aviation Authority (FAA) at the Port of Seattle has not allowed maturity testing for their projects. The agency made an exception last year in order to catch up on several paving projects that were delayed by a labor disruption for 17 work days. “They had been watching us use Giatec sensors on other projects, and requested we put them in every placement in order to speed up the construction process,” says McKinnon.

The airport was to be paved in alternate lanes, so they paved the two outside lanes before the fill lane. This required putting heavy equipment on the new slabs to pave the fill lane, so they had to reach strength on time. “To complete the work by the desired date, they allowed us to use the sensors, so we can put construction equipment on the pavement quicker,” says McKinnon.

The 21-inch-thick pavement poured at the airport generates more heat than a concrete cylinder or beam specimen, and maturity monitors made it easier to determine when the in-place concrete had cured enough to support construction activity.

Knowing in real-time when concrete makes strength also confirms when a slab is safe to open to the public.

“When we work with City of Seattle, it is all about traffic disruption,” says McKinnon. “When paving main traffic thoroughfares, the city’s goal is to get traffic back on it as soon as possible. We have mixes designed to allow traffic back on it within 24 hours. By using maturity testing, we know, depending on time of the year, that the in-place concrete will make strength within 11 hours, so traffic can be put on it sooner and contractors can save money on traffic control measures, because now they only need to use them on a project for half of the time.”