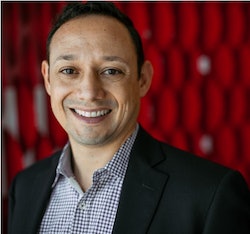 Hilti North America's Senior Vice President Rafael Garcia has been promoted to the Hilti Group Business Unit head for direct fastening effective January 2022 and will be relocating to the global headquarters in the Principality of Liechtenstein.

As marketing head, Garcia has been instrumental in establishing and driving strategy execution while scaling and professionalizing the marketing function to bring value to Hilti customers through an innovative portfolio of hardware, software and service solutions. He has been in this role since 2013 and was among the first wave of Hilti team members to move to Texas when the organization relocated headquarters' operations to Plano in 2014.

Garcia joined Hilti 20 years ago in a finance role at Group headquarters and went on to become a project and product manager in the Direct Fastening Business Unit. In 2017, he relocated to the U.S. as an account manager then regional manager, marketing director and later senior vice president of marketing.

Garcia holds a M.S.E. in Mechanical Engineering from the Federal Institute of Technology, ETH Zurich. He and his family will relocate to the Hilti Group Headquarters area for this assignment.

Garcia will be replaced by Erik Mikysa, currently head of marketing for Hilti Group Business Unit Diamond Systems, who will return to North America July 1, 2021 to begin the transition. In this role, he will report to Martina McIsaac, region head and chief executive officer.

Mikysa joined Hilti North America in 2013 and worked as senior director of services. In 2016, he was promoted to Hilti Group Headquarters to become a segment manager for Business Unit Diamond. In 2018, Mikysa was promoted into his current role where he has been instrumental in steering the business unit’s strategy and planning processes. He holds a B.A. in Economics and History from the University of North Carolina at Chapel Hill and an MBA from Stanford University.

Mikysa and his family will relocate to the Plano, Texas area for this assignment.

[PODCAST] Hilti Looking to Future by Investing in Trends

Here's why the most-read construction stories include when to use walk-behind trenchers, stand-on skid steers, and vacuum excavators, how to keep construction material delivery accountable, another measure of construction’s supply problem
Alexis Brumm
Larry Stewart
May 14, 2021
Latest