A winning bid of $4,650 won the online auction that ended at noon on World Lymphoma Awareness Day, Tuesday, Sep. 15. 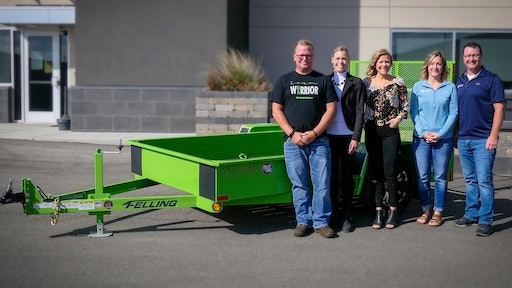 A winning bid of $4,650 won the online auction that ended at noon on World Lymphoma Awareness Day, Tuesday, Sep. 15. The bid winner was Adam Seifert of Springfield, Minnesota.

The Seiferts followed the Trailer for a Cause auctions for a few years and decided this was the year they were going to take part in the auction and place a bid. Adam and his wife Marisa own and operate Seifert Transport, which does contract hauling for Felling Trailers, transporting completed trailers to Felling Trailers dealers throughout the United States.

"We've always thought the yearly Trailer for a Cause event was a wonderful thing and a great way for a company to give back," said Adam.

He works closely with Felling Trailers' traffic coordinator scheduling loads, and asked her to send him the auction information when it was available, as he didn't want to miss the opportunity to bid on the trailer. "When she sent me the auction information, I sent a picture of the trailer to my brother and asked him, 'What do you think?' He laughingly told me, 'It's a little loud, (with the bright green paint color), but it's a sharp trailer.' It's a beautiful trailer, and the proceeds go to a great cause! We are so happy that we were able to help donate this year to LRF," he said.

A few days after the auction had finished, Adam and Marisa made the two-hour drive from their home in Springfield to Sauk Centre to pick up their FT-3 trailer. Once there, the couple met with owners Brenda Jennissen and Bonnie Radjenovich. A surprise for the Seiferts: They were introduced to the person who inspired the Felling Trailers' team members to select the LRF, longtime team member and Burkitt's lymphoma cancer survivor, Kevin Athmann. Adam told them, "When I decided that I was going to bid on the Trailer for a Cause, I set a proxy bid of $4,800. I won the closing bid at $4,650, but when I write my check out, it will be for the $4,800 to be donated to LRF."

The 2020 Trailer for a Cause FT-3 utility trailer was painted the signature green color for Burkitt's lymphoma and donned the LRF emblem along with Kevin's Team Warrior name. Several Felling Trailers' suppliers joined in to support LRF thorough sponsorship of the trailer build, from lighting to tires and paint. The 2020 Trailer for a Cause sponsors were Trans-Texas, PPG Industries, Dexter, Sealco, Peterson, Industrial Wood, and Demco.

Felling Trailers wanted to generate awareness about lymphoma, the research funding, and resources that the LRF has to offer those individuals and families it affects. The online auction ran for seven days, from Tuesday, Sep. 9, at noon CST through Tuesday, Sep. 15 (World Lymphoma Awareness Day) at noon CST ending with Seifert's winning bid of $4,650. One hundred percent of the $4,650, plus Seifert's remaining proxy bid for a total of $4,800, benefits the Lymphoma Research Foundation.

Felling 2019 Trailer for a Cause Raises $4,500 for Children's Cancer Research Fund

The U48-5 is a brand new tight tail swing model that builds upon Kubota’s U Series with a 5-ton, technology-forward machine packed with advanced features.
Kubota Tractor Corp.
May 17, 2021