Sizable market opportunity and the potential to significantly reduce the environmental footprint sets up remanufacturing of light- and medium-duty vehicles for rapid growth. 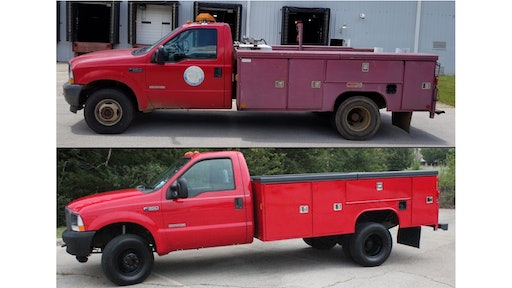 Fleet owners can obtain like-new reman vehicles on a predictable schedule without the often long lag time for delivery of new trucks.

The markets for vehicle remanufacturing are deep — and wide. Just about every type of U.S. business uses pickups, vans and SUVs — from construction contractors, plumbers and farms to insurance companies and healthcare agencies. The trade journal Automotive Fleet estimates U.S. corporate, government and commercial rental fleets include nearly 5 million Class 1 to 5 trucks (those under 19,500 lbs. gross vehicle weight). Smaller businesses that don’t meet the definition of fleet owners (15 vehicles), operate another 2.4 million trucks.

The average age of light-duty vehicles in the U.S. is 11.5 years, up from 8.4 years in 2000, according to the U.S. Bureau of Transportation Statistics. The best candidates for remanufacturing have at least 100,000 miles, experts say. With more than 132 million pickups, vans and SUVs operating for business and personal use in the U.S., that creates a large annual turnover of end-of-life vehicles that could be good reman candidates. In 2015 alone, nearly 15 million vehicles were scrapped. 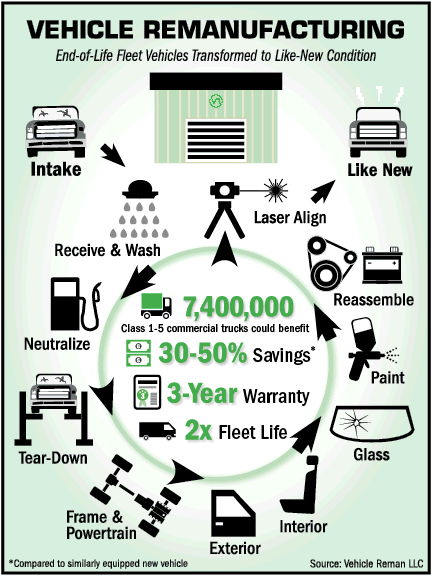 In addition to substantial cost savings, Vehicle Reman estimates its remanufacturing process has saved 10,500 MW hours of energy, cut water use by at least 38 million gallons and reduced greenhouse gas emissions by nearly 2,800 tons.Light trucks made up 70% of total vehicle sales in 2017, up from 50% in 2012, according to the Michigan-based Center for Automotive Research. Analysts expect that trend to continue.

“Fleet owners can obtain like-new reman vehicles on a predictable schedule without worrying about the often long time-to-delivery for new trucks,” says Steve Belden, director of sales and marketing for Vehicle Reman LLC. “This makes it easier to meet business needs without downtime or being short on vehicles.”

Vehicle Reman uses an assembly-line approach to rebuild whole vehicles to what the company calls like-new condition in less than 48 hours. Everything including the engine, transmission, drivetrain, interior and body are remanufactured with intent to double the life of a vehicle at about half of its new replacement cost.

The Remanufacturing Industries Council estimates the U.S. remanufactured products economy is worth $100 billion a year — more than 60% of the global total. Automotive parts is the largest category of reman products. A 2012 report from the U.S. International Trade Commission estimated reman businesses employ 180,000 people in the U.S. alone.

The reman economy has all of the ingredients for “accelerated growth,” according to Tessa Vlaanderen, founder of Circular Futures, a New York-based consultant group. “The reman economy has a huge potential in the U.S.,” she says. “The U.S. already has the largest remanufacturing industry in the world and has a very advanced stakeholder ecosystem driving its development.”

Vlaanderen and other experts say a “circular economy” is taking hold across the globe – one in which key product materials are retained and incorporated into like-new reman products such as automotive parts, medical devices, heavy off-road equipment, home appliances and furniture. The traditional linear manufacturing model starts with finite raw materials that are made into products that are eventually discarded after use.

Reman takes the “core” of an end-of-life product and replaces worn or defective components. The result is a like-new product that meets all of the performance specifications of new. The reman process uses up to 90% less raw material, requires 70% to 80% less energy and produces up to 85% less air pollution.

The reman economy “has the capability to deliver products with like-new performance, quality and reliability, which when complemented with relevant services can lead to significant cost savings,” Vlaanderen says. “Manufacturers who embrace remanufacturing are able to diversify their customer base and develop long-lasting client relationships.”

In the automotive parts marketplace, reman has earned such a good reputation for quality and performance that customers often specify reman parts.

“Buyers of reman parts know that they are getting original parts that are remanufactured to same-as-new, or sometimes even better, quality at a price that’s better for their wallets,” says John Chalifoux, president of MERA — The Association for Sustainable Manufacturing. “Experienced buyers know that reman parts will perform and not cause premature downtime. Our mission is to broadcast this reality to a wide audience.” 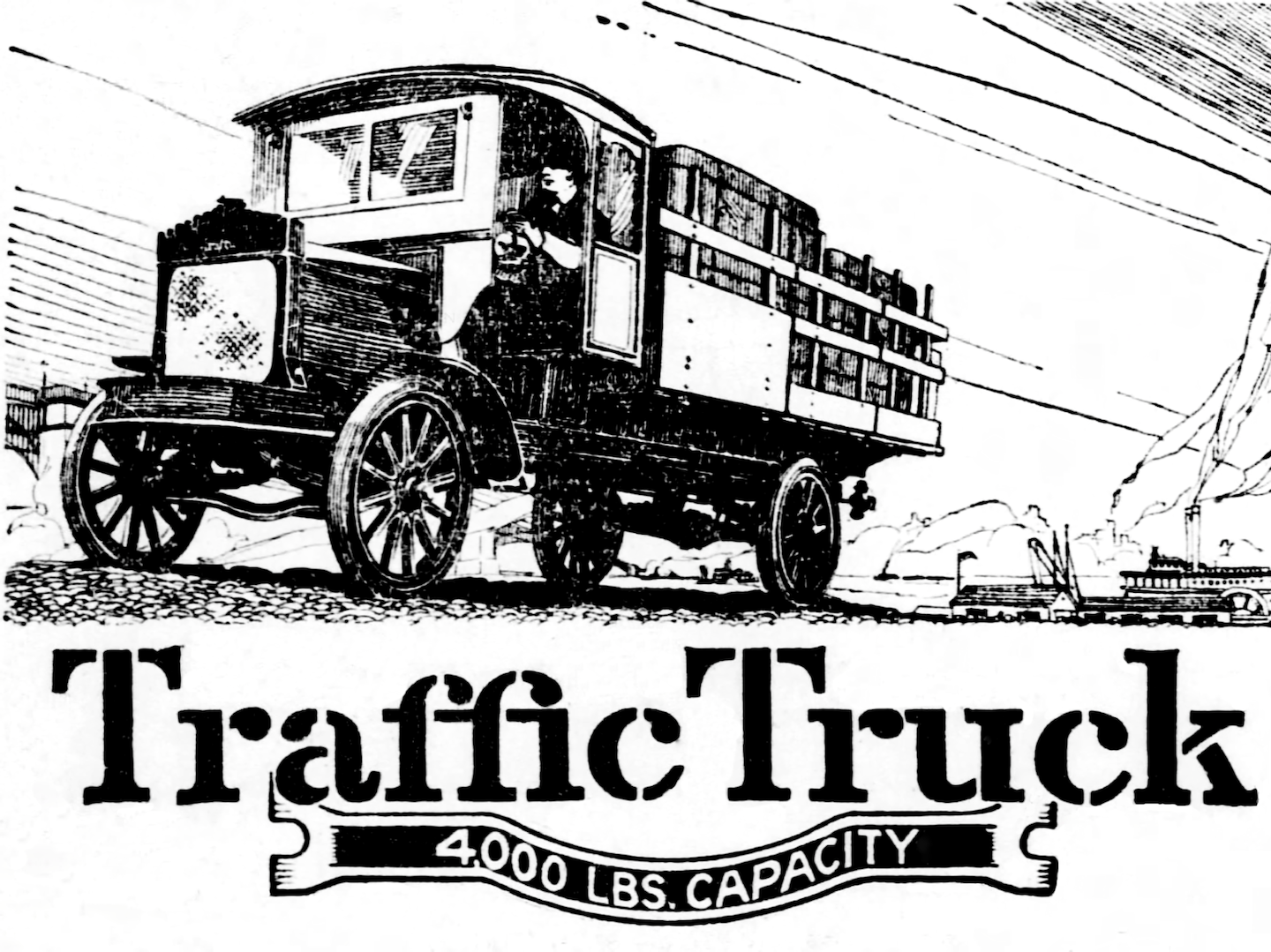 The Traffic Motor Truck Corp. began a reman program for its lineup of commercial trucks in 1922.

Auto Remanufacturing Has a Long History

It has been said that reman was born during World War II, but its history stretches back almost to World War I. In the 1920s, mechanics around the country went to training schools to learn the remanufacturing process for Ford automobile engines. An $800 remanufactured Nash Motors Co. automobile was displayed at the 1924 National Automobile Dealers Association show in Chicago.

In 1922, the Universal Motor Company sold “universalized” Ford, Dodge, Buick and Hudson autos that had undergone “a thorough process of remanufacturing (so) that they perform and look like new and actually run more miles for the money than new cars,” according to company advertising. The Traffic Motor Truck Corp. began a reman program for its lineup of commercial trucks in 1922, with company marketing touting the vehicles having been “put through the same process of construction as a new truck.”

The reman concept never caught fire in the 1920s, but it reappeared in WWII, when raw materials were scarce. Henry Ford envisioned reman as a way to keep the auto industry healthy during the war. Engines and other components were also remanufactured for use in American tanks and other equipment. After the war, the Checker Cab Co. used remanufacturing for more than 40 years to give its fleets new life. In modern times, the U.S. Army began remanufacturing transport trucks in the 1990s when funding was scarce for new fleet vehicles.

A Camera That Can Take a Punch

The backup camera is a lifesaving safety technology until you need a camera to keep showing an operator blind spots from somewhere more exposed than built into a bumper or counterweight -- enter Dakota Micro's rugged cameras.
Jonathan Kozlowski
June 28, 2021