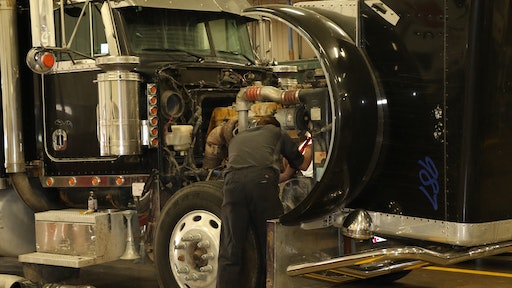 Successful fleets realize that a proactive approach can avoid costly repairs and the associated downtime due to emissions systems failures.
Dave Haglund

But the complexity of these systems cannot be ignored. Error codes and warning indicators need to be dealt with in a timely fashion. Successful fleets realize that a proactive approach can avoid costly repairs and the associated downtime.

One of the more common issues that can create problems with modern engine aftertreatment systems is air leaks in the intake and aftertreatment plumbing. “Air leaks typically impact the engine and aftertreatment system by affecting engine combustion, and changing characteristics of the exhaust,” says Jeff Granger, director of technical services North America for quality and satisfaction, Volvo Group Truck Technology. “Typically, boost air leaks, or improperly serviced air intake systems, result in excessive engine-out soot for the DOC and DPF to manage.”

An audible noise change from the engine can be one clue indicating a possible air leak. “Perform troubleshooting on the air leak causes. Also, MIL faults can indicate when the system is not performing as designed. Troubleshooting of those faults could indicate air leaks as a cause,” says Granger.

The engine’s sensors and OBD monitor air flow through the engine and can detect leaks. “If an air leak is detected, it should be addressed. Items such as CAC hoses should be inspected for cracks or abrasion and addressed proactively,” Nachtman advises. 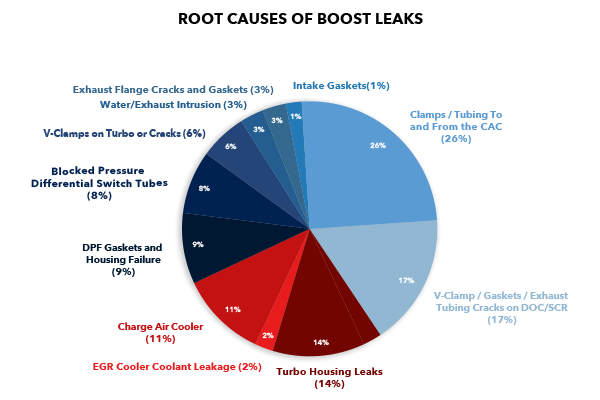 Redline DetectionExcessive soot creation is a leading cause of downtime. “The most common cause of aftertreatment-related downtime is over-clogging of the DPF and associated too-frequent maintenance and cleaning,” says Alex Parker, executive vice president, Redline Detection. “The root cause of this over-clogging is unmetered air leaks that cause the vehicle to throw on more fuel, costing fuel economy and making a richer mix that quickly clogs up DPF filters, increasing costs of DPF maintenance and cutting into uptime.

Leak testing should become part of your regular routine. “The best practice being used by large fleets is to perform a 10-minute leak test as part of routine maintenance,” says Parker. “For trucks in severe-service conditions, leak detection as part of regular scheduled maintenance for intake and exhaust systems is absolutely essential, just like changing the oil.

“Because air leaks in the intake and exhaust system are the most common cause of aftertreatment failure and excessive maintenance, maintaining the seal and integrity of your intake and exhaust systems will give you the biggest payoff,” he continues. “The ROI is clear: Adding a high-pressure leak test into routine maintenance will give you substantial savings of time and cost in the diagnosis and repair of problem vehicles and increase your uptime.”

Air leaks will occur over time. “As vocational vehicles cover millions of miles, often in grueling conditions and inclement weather, the best-made vehicles — tight when they rolled off the assembly line — rumble loose,” says Parker. “Those jarred, cracked and worn components are often the root cause of hard-to-diagnose aftertreatment problems.”

Any time an aftertreatment system has been serviced, check for leaks. “It’s essential to leak test a vocational vehicle after routine DPF cleaning to ensure that a leak has not been unintentionally created during the reinstall of the filter,” Parker advises. “An efficiently functioning intake and exhaust needs to be completely sealed to run at peak efficiency. Air leaks are often overlooked, causing sensors to communicate bad data; then sensors are unnecessarily replaced as bad. Fleet operators can cut parts and labor costs — avoiding ‘parts darts’ replacement of expensive components — by leak testing to pinpoint the problem. Faulty components creating air leaks are most frequently inexpensive gaskets, valves and clamps.”

It is easy for the technician to inadvertently introduce air leaks into the system. “In the event of any engine repair, it’s essential to ensure that the intake and exhaust are completely sealed for efficient operation of the aftertreatment system,” says Parker. “A 10-minute leak test will confirm the system’s integrity with 100% certainty.”

Even small leaks can cause early plugging of a DPF, increasing maintenance costs, hurting MPG and cutting into uptime. “Ultimately, a simple air leak can cause a lean condition that will cause an excess of temperature in the exhaust system, which can cause a thermal event, rendering the DPF inoperable and triggering a costly replacement,” Parker explains. “This thermal event can cause an excessive NOx condition, causing the engine to burn through DEF fluid fast.”

Aftertreatment systems are typically robust. It is the upstream failures that must be monitored since they can lead to system faults. “Issues can occur if DEF quality is poor, making it important to purchase a high-quality DEF,” says Nachtman.

If an engine consumes more oil than the engine manufacturer’s guidelines, ash can prematurely plug the DPF. “Oil consumption should be monitored to prevent DPF plugging. Coolant consumption can result in poisoning the aftertreatment system,” Nachtman notes. “If an internal coolant leak occurs, the issue should be addressed as soon as possible to reduce damage to the aftertreatment system.” 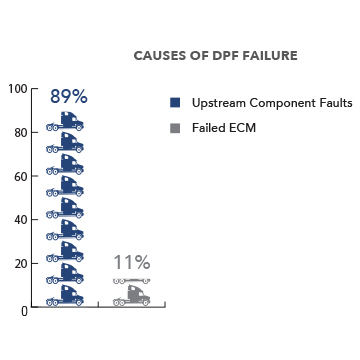 Redline DetectionThe aftertreatment system is designed to work with a healthy engine. “Excessive oil or coolant consumption by the engine can have a negative consequence on the Engine Aftertreatment System (EATS),” says Granger. “The EATS can be contaminated by liquid oil or the oil can be oxidized in the DPF, leading to excessive ash loading that will require the DPF filter to be cleaned prematurely. Also, coolant consumption can contaminate the DPF by the coolant chemicals being captured in the DPF filter, requiring cleaning. If an engine issue is repaired for excessive oil or coolant, it is advised you check the DOC/DPF/SCR for any consequences.”

Other engine-related problems can also lead to premature DPF filter plugging. “This includes EGR system failures and other engine issues that interfere with proper engine combustion,” says Granger. “The best approach is to follow maintenance guidelines and do not ignore MIL fault. Quick attention to issues will reduce unplanned downtime.”

The engine and its aftertreatment system are engineered to work with the recommended fluids. Don’t deviate from the recommendations. “CK-4 and FA-4 oils are specially formulated for use in 2017 GHG engines, and help reduce ash accumulation in the DPF,” Nachtman points out. “Using older oils can reduce the DPF cleaning interval.”

Engine condition can influence the amount of ash being collected by the DPF. “When an engine reaches its end of life, oil consumption may rise when the piston rings are worn out,” says Nachtman. “This will cause the DPF to accumulate ash faster.”

As the engine wears, the increase in oil consumption will increase the ash loading of the DPF. “This will require the DPF to be cleaned to remove the ash,” says Granger.

Keep Up on Recommended Maintenance

The maintenance on upstream components has a direct impact on the aftertreatment system. 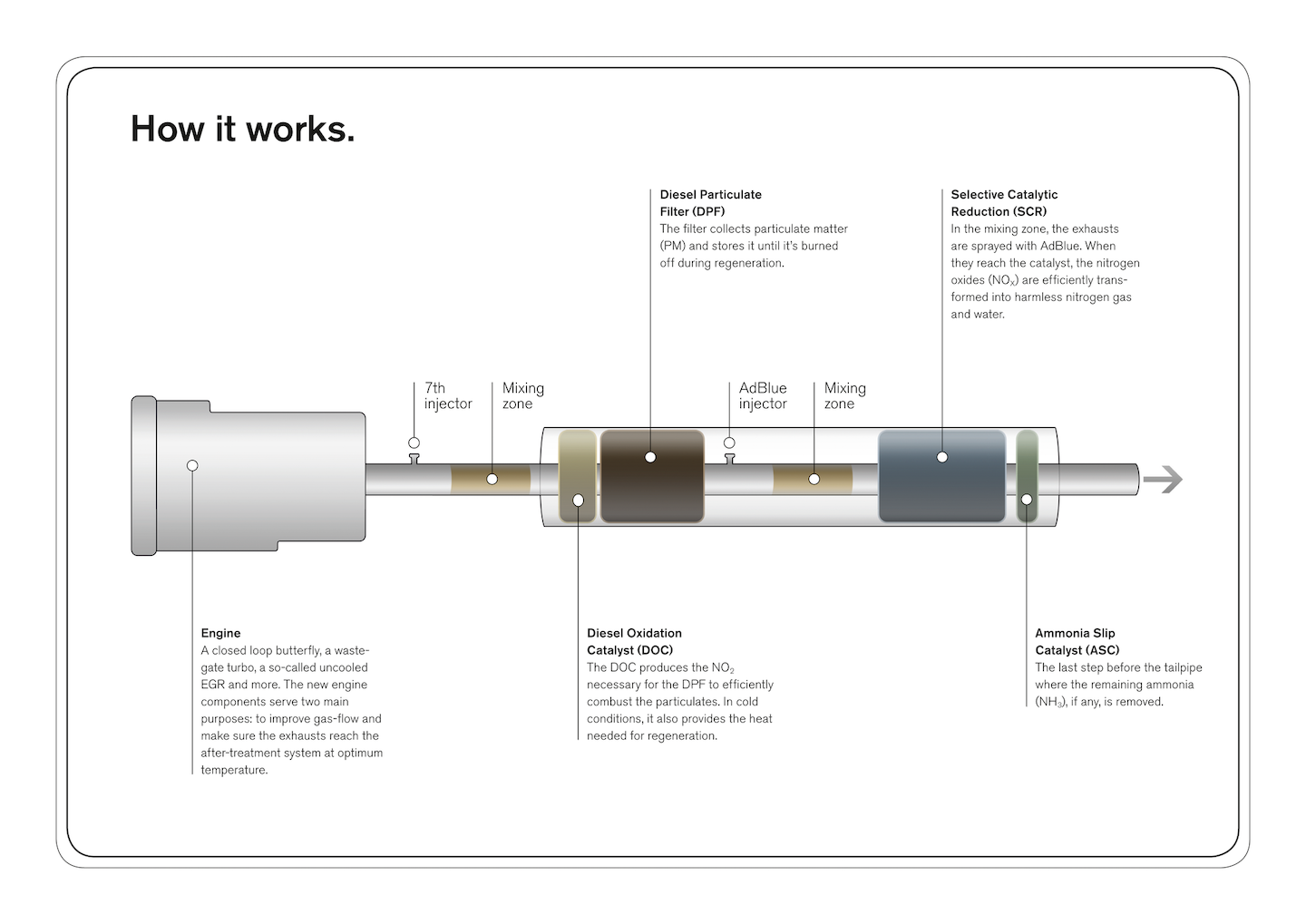 Today’s diesel engine aftertreatment systems include many different components, such as a Diesel Oxidation Catalyst (DOC), Diesel Particulate Filter (DPF) and a Diesel Exhaust Fluid (DEF) injector and mixer.Volvo TrucksFor instance, fuel injection system faults are one of the most common causes of increased particulate matter, which is captured by the DPF. Other common upstream issues that can create problems include dirty air filters that restrict air flows and leaky turbocharger oil seals.

The application has an influence on how you track DPF cleaning intervals. “When operating in a vocational application, many customers will need to clean the DPF based on hours instead of mileage,” says Nachtman.

Some fleets have elected to shorten DPF cleaning intervals based on their experience in their particular applications. If the DPF becomes excessively plugged, it becomes harder to clean and more susceptible to damage. These ceramic filters can cost several thousand dollars and can be easily damaged or cracked if handled improperly.

Fuel injector failures or turbo problems can also create issues with the DPF which require cleaning for proper operation. What happens upstream affects downstream components. Any failures upstream require careful attention to aftertreatment components to avoid bringing trucks back into the shop. Successful fleets have proven that engine aftertreatment system costs can be successfully managed.

Checking for air leaks in modern diesel engines can be a challenge. You need to safely replicate the boost pressure in the system typically produced by the turbocharger.

Developed in collaboration with International Trucks, the Redline Detection HD PowerSmoke replicates high-pressure boost load so the intake and exhaust systems can be tested for faults with the engine safely off. It can reliably detect high-pressure and low-pressure upstream faults, pinpoint exact locations and precisely identify failing components.

The results of successful leak detection and repair have been impressive. Technicians have reported that 96% of excessive forced regens are being eliminated. Fleets are also reporting an increase in fuel mileage by eliminating performance-killing upstream air leaks. By ending unresolved upstream faults and the associated aftertreatment issues, the technology is dramatically cutting warranty costs and comebacks.

Traton Makes Unsolicited Offer to Buy Navistar for $35 Per Share

Association exploring options to share education and connect businesses in year ahead .
October 21, 2020

If the materials being hauled are compatible with an ejector body, you may realize efficiency gains.
Curt Bennink
October 19, 2020
Follow Us