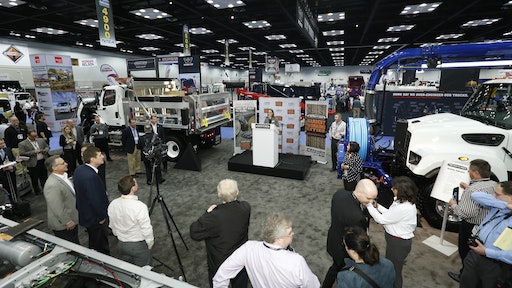 Over the past decade the National Truck Equipment Association (NTEA) Work Truck Show has grown as a venue for significant product introductions. This year 11,005 industry professionals from all 50 states, eight Canadian provinces and 23 countries turned out for North America’s largest work truck event. This breaks the Show’s previous attendance record of 10,408 set in 2012. The Work Truck Show 2015 was held March 4–6, with educational sessions and the concurrent Green Truck Summit kicking off March 3, at the Indiana Convention Center in Indianapolis, IN.

New product introductions were a major draw this year. Mercedes-Benz Vans revealed its new Metris mid-size van on Wednesday. Other announcements were the unveiling of the Ford F-750 Tonka dump truck, Hino Trucks’ move into the Class 4 market with its 155 model, Chevrolet’s introduction of a 2015 Colorado box delete option, Ram Commercial’s expansion of its Ram 2500 CNG offerings, Utilimaster’s reveal of its new VELOCITY walk-in van and STAHL’s debut of the industry’s first polymer composite service body, the Razorback.

“Recognizing that we had multiple global reveals, a record-breaking 24 press conferences and more equipment on display than ever before is a testament to the critical role The Work Truck Show has come to play in the commercial truck industry,” says Steve Carey, NTEA executive director. “The energy and excitement on the show floor reflects an industry that is expanding and economically sound.”

Over the last five years, NTEA has increased the size of the Show floor by 40 percent in response to growing demand. Exhibit space for The Work Truck Show 2016 is already sold out. The Work Truck Show returns to the Indiana Convention Center March 2–4, 2016, with educational sessions and the concurrent Green Truck Summit kicking off March 1. Registration opens in October.