The VPL will be the first facility in North America to allow comprehensive testing of current and future products for Volvo and Mack Trucks. 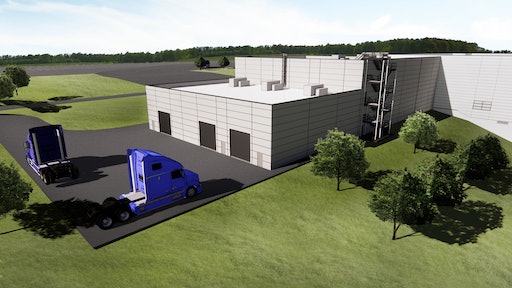 Shown is a rendering of the $33 million state-of-the-art Vehicle Propulsion Lab, which is expected to be completed in Q2 2023.

During a groundbreaking ceremony today, the Volvo Group announced a $33 million expansion of its powertrain research and development site in Hagerstown, MD, for the construction of a new, state-of-the-art Vehicle Propulsion Lab (VPL). It will be the first facility in North America to allow comprehensive testing of current and future products for Volvo Trucks, Mack Trucks, Prevost and Volvo Bus to meet evolving government regulations and ensure high performance on the diverse North American roadways.

Housed under one roof, the lab will consist of two environmental chambers. One chamber will have a chassis dyno capable of emissions measurements and simulating extreme-weather and altitude conditions. The second will offer testing of fully operative vehicles, including highway and vocational trucks, as well as coach buses, for starting in a variety of weather conditions. 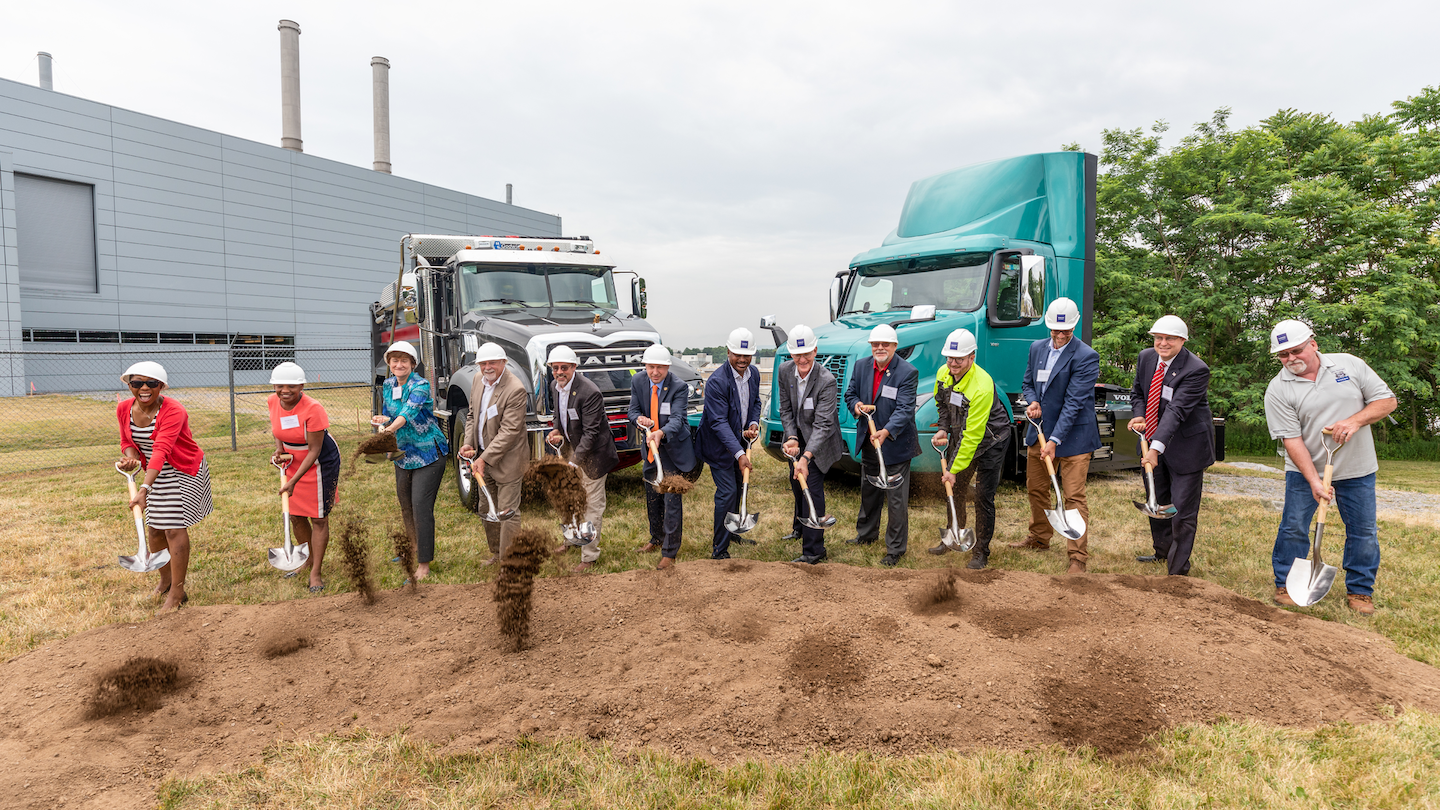 Volvo Group executives were joined by several Delegates of the Maryland State Assembly and Maryland Senator Paul Corderman at a groundbreaking ceremony for the construction of the new Vehicle Propulsion Lab.“The Hagerstown powertrain technology site plays a significant role in the Volvo Group’s efforts to offer advanced transportation solutions that meet customers’ needs today and down the road,” said Lars Stenqvist, chief technology officer, Volvo Group. “The all-new VPL, slated to open in the second quarter of 2023, will enable us the ability to more quickly develop and test battery-electric and hydrogen-based fuel cell solutions, as well as internal combustion engines, which will be powered by fossil-free fuels in the future, for our Class 8 trucks and coach buses.”

Additional testing features in the VPL will include:

“Our engineers currently rely on long-distance travel for extreme-weather testing or tap various third-party labs that specialize in specific types of testing,” said Audley Brown, vice president of powertrain engineering for Volvo Group North America. ”The VPL will be one of the few places in operation that offers vehicle emissions and onboard diagnostics requirements at all expected operating conditions for trucks, buses and powertrains.”

The company also expects the new lab to help drive ongoing product quality improvements and speed-to-market capabilities due to the strategic migration from on-road testing to controlled, lab-environment testing. 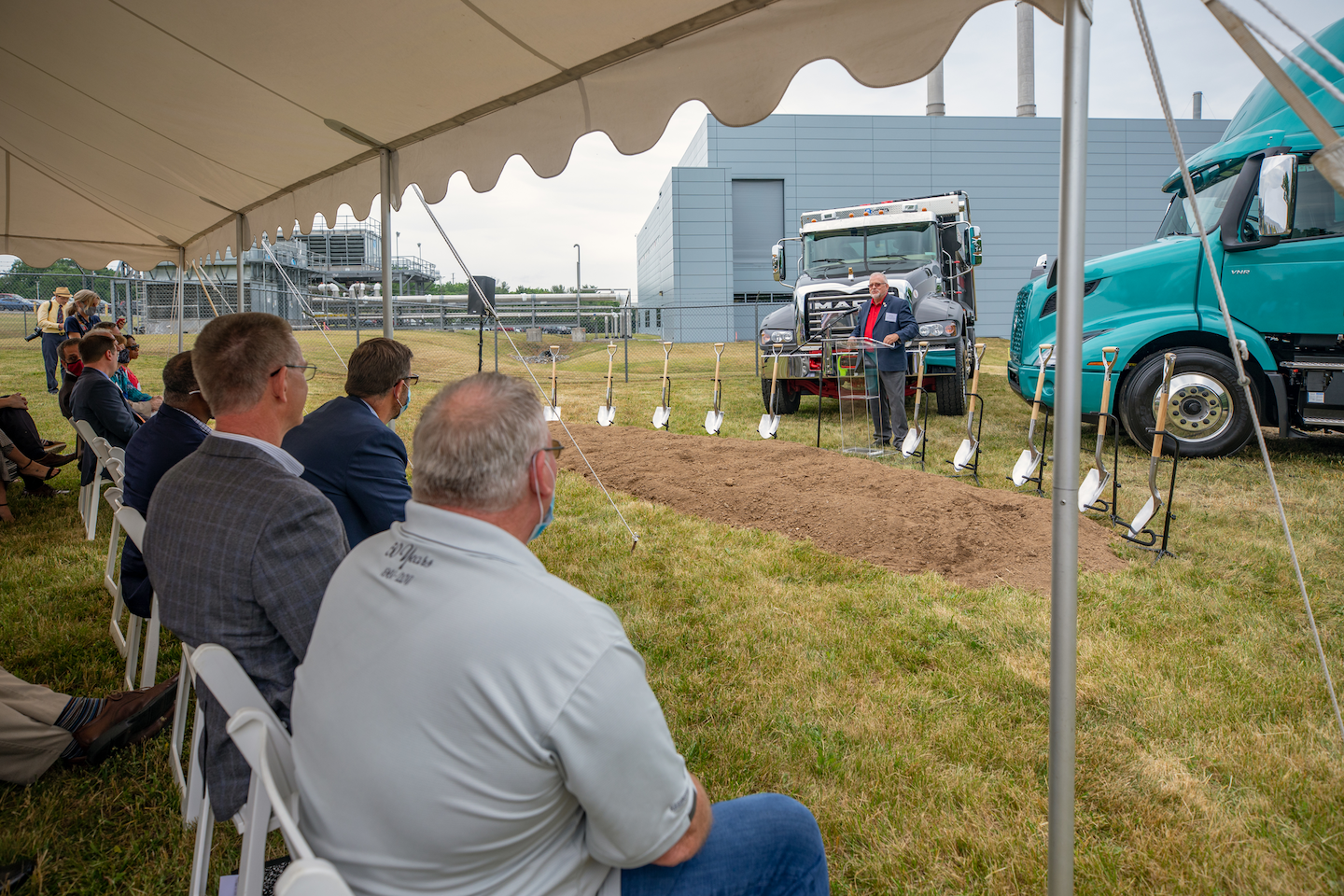 During the groundbreaking ceremony, Volvo Group executives were joined by local union leadership, and state and county officials, including Washington County Commissioner President Jeffrey Cline (at the podium).At final construction, the VPL will be more than 35,000 sq. ft. (more than 3,300 sq. meters), two stories high and connected to the existing engine development lab on the Hagerstown campus. It’s been 15 years since the current lab went into operation, which involved a $40 million investment at the time. Since then, the company has spent an additional $12 million upgrading the test cells, a portion of which was used to enable the creation of electricity regeneration when operating the dyno tests.

The Volvo Group employs more than 250 people at the current site from engineering, procurement, environmental, health and safety functions, and the new VPL will add around 10 new jobs, including both non-bargaining and United Auto Workers union-represented team members. The company’s Hagerstown campus is also home to the Volvo Group’s powertrain manufacturing facility, producing engines, transmissions and axles for Mack Trucks, Volvo Trucks, Prevost coaches and Volvo Buses sold in North America. Employing more than 1,700 team members, the company has invested more than $294 million since 2011 at the 1.5 million sq.-ft. manufacturing facility.