The year 2011 marks 110 years as a leading supplier of specialty transport trailers. 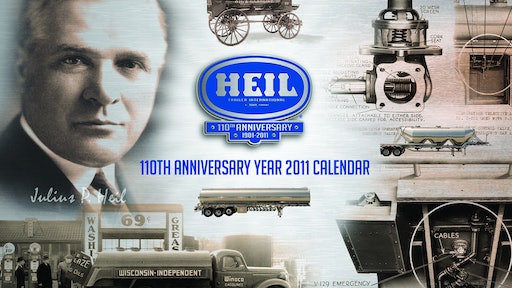 The year 2011 marks the 110th anniversary for Heil Trailer International.  To recognize this amazing milestone, Heil Trailer will host a companywide celebration day at its manufacturing facilities.  It will also introduce a collection of marketing and promotional items supported by an advertising and media campaign focused on “Celebrating 110 Years of Growth.”

The early 1900s saw the beginnings of revolutionary change in the world: The Wright brothers' flight at Kitty Hawk, Einstein's theory of relativity and Marconi's first transatlantic wireless message. This was also the time a man named Julius P. Heil embarked on a personal journey to transform the transportation industry with his innovative ideas.

In 1901 Julius Heil founded the Heil Railjoint Company in Milwaukee, Wisconsin pioneering the use of electric welding. As the company grew and prospered, Heil began building truck bodies, hydraulic hoists and a variety of truck trailers for the newborn automotive industry.  In 1938, after Julius Heil was elected Governor of Wisconsin, his son Joseph F. Heil became C.E.O. of The Heil Company and later became Chairman of the board. Joe Heil, Sr. served for 39 years until his son; Joseph F. Heil, Jr. took over. He served as the company's leader until 1993 when Heil was purchased by the Dover Corporation.

With the support of Dover Corporation, Heil's employees continue to focus their efforts on developing innovative products and services, building relationships and providing the best "after-the-sale" service for the transportation industry – the same principles that Julius P. Heil embraced in 1901 when he founded the company.  Heil Trailer International continues to be a financially stable and enduring presence in the trailer industry; whose founding principles are very much evident in the work ethic of all Heil associates around the world.

Below is a timeline of significant accomplishments in Heil’s history:

Heil’s longevity is a result of commitment to high quality, exceptional value and outstanding performance while maintaining the highest ethical and moral standards. Heil’s policy is to be a responsible corporate citizen wherever they operate by protecting their personnel, surroundings and achieving sustainability through responsible environmental management and performance.  Its vision: Heil Trailer International is the best specialized transportation solution provider in the world.