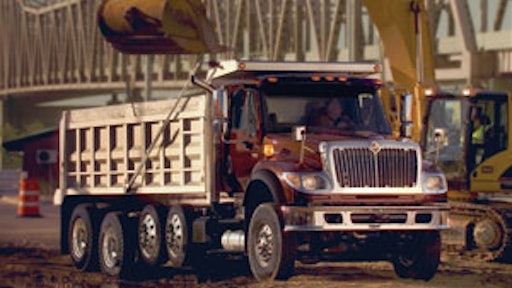 The International 7700 combines many of the standard features and benefits of the 7600 models with the chassis strength and packaging of the company's 5000i. The model 7700 trucks will include set-forward front axle 4x2 and 6x4 versions, as well as a set-back axle 6x4 version.

Two of the new models feature a front bumper to axle setting of 29.1 in. and a frame system that optimizes payload weights for states that follow bridge formula limits. "The first thing we did is we started with the 12.25-in. rail," says Rob Swim, director of marketing for severe service vehicles, International Truck and Engine Corp. "We have been using the 12.25-in. rail on our 5000 Series for approximately 20 years."

This rail offers both weight savings and strength. "It is a single rail with the capacity of a double rail," says Swim.

The weight savings depends on the wheelbase. "On a 250-in. wheelbase, it saves 400 lbs. [compared to many double 10-in. frames]," says Bill Sixsmith, marketing director, Severe Service Vehicle Center.

"However, certain applications still require the double rail," says Swim. The large single rail doesn't quite have the same resistance to bend moment (RBM) as the double rail. "But in 90% of the applications - dump, mixer, roll-off -it will take the place of the 10-in. rails."

As you might expect, such changes have added to the vehicle's cost. "This is a premium-priced product vs. the 7600," says Swim. "It's lighter weight, it has a better ride and it is bridge formula." The 7700 does share the same engines, transmissions, electrical system and interiors as the 7600.

The better ride is a result of a new front taper leaf spring suspension. This suspension system accommodates both empty and fully loaded trucks. "You get a good ride because you are not riding on a four-spring pack all of the time," says Swim.

A career in truck driving is becoming a more viable option as unemployment rates reach an all time high, but how much should you be paid? The answer varies.
Mackenna Moralez
February 18, 2021
Follow Us