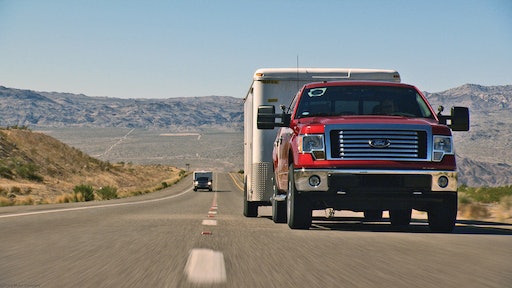 Turbo charging allows a fuel-efficient small displacement V6 to pump out comparable power to a V8.

Manufacturers are pulling out all the stops to increase half-ton pickup trucks' fuel economy without sacrificing performance.

New engine offerings in the half-ton pickup-truck market are a radical departure from previous generations. Turbocharging, cylinder deactivation, variable valve timing and direct injection are all becoming commonplace as pickup manufacturers strive to boost fuel economy. There is more than one way to squeeze extra efficiency out of the engine.

But the engine choice leading the charge for Ford's half-ton pickups is the 3.5-liter EcoBoost V6. Its 365 hp and and 420 lb.-ft. of torque is comparable to a naturally aspirated V8's power, but it manages fuel economy of 16 city/22 highway miles per gallon.

EcoBoost is a cornerstone of Ford's strategy to provide high-output, smaller-displacement powertrains that optimize both performance and fuel economy. Direct fuel injection and turbocharging are used to increase power form the smaller engine displacement while extending fuel economy up to 20 percent and reducing CO2 emissions up to 15 percent compared to larger engines of comparable power. It also uses independently variable camshaft timing. The EcoBoost engine in the F-150 supplies up to 90 percent of peak torque in the speed range from 1,700 to 5,000 rpm.

Ram's 1500-Series pickups are available with the either a 3.6-liter Pentastar V6, or a 5.7-liter HEMI V8 with Fuel Saver Technology (cylinder deactivation).

General Motors calls its cylinder-shut-off technology Active Fuel Management. It is standard on all available engine platforms for the 1500 Chevrolet Silverado and GMC Sierra pickups, allowing the V8 and V6 engines to switch to V4 operation.

Video: How GM Turns a V8 into a Four-Cylinder

General Motors' first hood-to-hitch rework of its 1500 Series pickup trucks in several years delivers an all new set of EcoTec3 engines based on the proven small-block design — the standard 4.3-liter V6 and optional 5.3-liter V8 and 6.2-liter V8.

Active Fuel Management allows the pickups to seamlessly switch to run on four cylinders during light-load driving to save fuel. The technology is torque based.

"When you put your foot in the pedal, you are demanding a certain level of torque," says Balsley. "If the engine is in a range where we have enough torque, we will maintain four-cylinder mode; if you need additional torque, we will go to the V6 or V8 mode."

These technologies will be standard on every Silverado and Sierra and work together to precisely control the burning of fuel in the cylinders.

Ram to Bring Diesel to its Half-Ton Pickups in 2013

Not only are today's half-ton pickups coming standard with six-speed automatic transmissions, but Ford and General Motors also just entered an agreement to jointly develop a new generation of nine- and ten-speed transmissions for cars, crossovers, SUVs and trucks. Collaboration enables both automakers to design, develop, engineer, test, validate and deliver new transmissions faster and at lower cost than if each company worked independently.

The joint-development agreement marks the third time in the past decade that GM and Ford have collaborated on transmissions. As before, both companies will manufacture transmissions in their own plants with many common components.

"The goal is to keep hardware identical in the Ford and GM transmissions. This will maximize parts commonality and give both companies economy of scale," says Craig Renneker, Ford's chief driveline engineer. "However, we will use our own control software to ensure that each transmission is carefully matched to the individual brand-specific vehicle DNA for each company."

Features such as front air dams and spoilers incorporated into tailgates may appear subtle, but they play an important role in reducing drag. For instance, on Ford pickups, the chamfered shape to the rear of the cab helps direct aerodynamic wake over the pickup box, and the top of the tailgate is shaped to work with the cab chamfer. Likewise, the front bumper valence and spoiler design combine to manage air flow under the truck.

"The shape of the [front] air deflector on the Chevrolet Silverado 1500 comes right from work we have done with the Corvette in the aero tunnel," Luke points out. Then there is the belly pan that keeps air flowing underneath. "You want to keep air flowing laminar so it does not become turbulent and drag." A plastic shield added to the center of the undercarriage helps.

Another common theme has been the slope of the front windshield. "We flattened the windshield [on the Chevrolet Silverado] by about 1°," says Luke. "That allows more air efficiency over the cab."

Chrysler integrated several technologies to improve the 2013 Ram 1500's aerodynamics, taking its 1500 pickup to an impressive .363 coefficient of drag.

A unique enabler is the Ram Active Level air suspension, which features five height settings for optimum ride and aerodynamic performance. It operates automatically, or may be controlled manually via console or key fob controls. Normal ride height is 8.7 in. of clearance as measured from the base of the door sill. Aero mode lowers the vehicle 0.6 in. to improve efficiency up to 1 percent. The truck's computer senses vehicle speed and adjusts ride height for optimal performance and fuel economy.

Ford has also incorporated active grille shutters on its Atlas concept truck, so don't be surprised if you see this feature on the next-generation F-150 or Super Duty.

GM has concentrated on aerodynamics, as well. Updated mirrors reduce turbulence; triple-sealed, inlaid doors; and roof and tailgate design all help air flow smoothly and quietly over the Silverado and Sierra. Additional sealing around the grille, headlights and space between the cab and box are also designed to reduce drag for the new trucks, along with new aerodynamic spats located in front of the rear wheels. Coefficient on the 2014 models is 5 percent less than what's on the road today.

Electric power steering is taking over the industry as manufacturers search for fuel savings. Every half-ton truck from the U.S. makers -- except Ford's F-150 equipped with the 6.2-liter V8 -- has it.

An electric motor powering the truck's rack-and-pinion steering relieves the engine from the burden of turning a hydraulic pump, improving fuel efficiency up to 1.8 percent and leaving an extra 5 hp to turn the drive wheels. The motor can be tuned for more-consistent, crisp steering feel and plenty of assist for parking maneuvers.

Another fuel-saving first in pickups is a stop-start feature on select 2013 Ram 1500s. The new system improves fuel economy up to 3.3 percent (adding about 1 mpg to the truck's city driving efficiency) by shutting the engine off when the truck comes to a complete stop. Accessories (radio, gauges, heating or air conditioning, etc.) continue to operate. The engine restarts automatically when the driver releases the brake, allowing seamless acceleration.

Anything designers can do to reduce weight will result in lower fuel consumption.

To this end, aluminum hoods are a reality. The 2014 Chevrolet Silverado and GMC Sierra feature aluminum hoods that, were they rendered in steel, would weigh 37.5 lbs. more.

Frames have been getting stronger and lighter. The fully boxed structure underpining Chevy Silverado is one example.

Even powertrains have lost weight. For instance, head and block for the GM half-ton pickup engines options are all aluminum now.

Never before has so much effort been focused on squeezing economy out of a full-size truck. It's becoming a game of tenths of a mile per gallon, integrating many different technologies to significantly improve fuel economy.

Based on what we've already seen, it's hard to imagine what pickup engineers will think up next.

Diesel pickups have long dominated the 3/4-ton and larger pickup truck market. Now, a diesel offering for the 1/2-ton market has been introduced.

To understand the significance, you must first understand how gasoline and diesel engines differ. Typically, gas engines make more horsepower, while diesels produce more torque. Don’t get confused by the horsepower and torque ratings when trying to pull heavy loads. Torque is the twisting force that determines how much load can be moved.

By design, gas engines rev faster and are able to reach higher rpm peaks than diesels. This allows them to attain greater horsepower and quicker acceleration. The torque advantage of diesels is well-suited for pulling heavy loads up steep grades. Because of the relatively high-compression ratio necessary to ignite the diesel fuel (17:1 diesel vs. 9:1 gas), a diesel makes all its torque and power low in the rev range.

Even though the price per gallon of fuel may be more expensive, the diesel engine is more efficient and therefore goes farther on a gallon of fuel. In order to benefit, the increased fuel economy of a diesel engine must pay for the difference in initial purchase price over the life cycle of the pickup. But you also you need to factor in that diesels last longer than gasoline engines.

Consider that today’s 1/2-ton pickups have the same capability as the 3/4-ton trucks of the previous decade and you have a strong case for a diesel pickup in this product segment. Beginning in third-quarter 2013, Ram Trucks will become the first brand to offer a small-displacement diesel for its 1/2-ton line. The 2014 Ram 1500 will offer a 3.0-liter EcoDiesel engine mated with the eight-speed TorqueFlite automatic transmission. The powertrain is expected to deliver a combination of fuel efficiency, torque and capability.

Ram to Bring Diesel to its Half-Ton Pickups in 2013