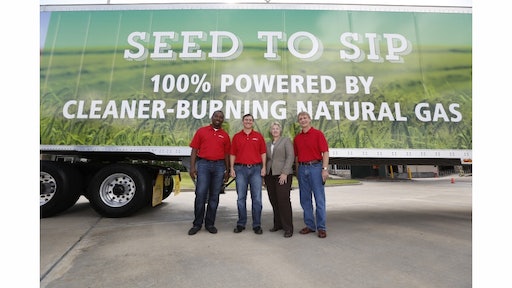 Fuel for Thought is a new department highlighting advances in fuel technology and the potential benefits today, or in future, for construction fleets. It will also periodically feature case studies of companies who are successfully implementing alternative fuels in their operations.

In September, Anheuser-Busch became one of only a few large, heavy-haul shippers to convert a fleet to alternative fuel power vehicles. The CNG conversion represents significant business and environmental benefits for the company. Working with transportation partner Ryder, the 12-liter lighter-weight engines are expected to emit 23% less greenhouse gases (compared to diesel), which is the equivalent of taking approximately 420 passenger vehicles off the road.

“The next-generation CNG engine technology paired with support from state incentive programs contributed to our ability to take such a significant step in fully converting our Houston fleet,” says James Sembrot, senior ?? of transportation at Anheuser-Busch. “Previously, the Houston brewery fleet was operating diesel tractors. Houston is one of our largest U.S. distribution areas. We serve approximately 30 to 40 wholesaler customers and our trucks travel 9.2 million miles a year, so we saw a major opportunity to create a more efficient transportation ecosystem in Houston.”

The CNG conversion came as the 2014 football season kicked off, representing one of the company’s busiest shipping periods of the year. An estimated 17 million cases of beer are shipped by the Houston fleet during the third quarter. Through the advanced engine technology, the fleet is expected to reduce 2,000 tons of carbon dioxide (CO2) emissions per year when adjusting emissions reduction for consumption rates.

As part of its "Seed to Sip" environmental platform, the company added a global environmental goal to reduce carbon emissions by 15% in its logistics operations through network planning, transportation and warehousing by the end of 2017.

“We launched 'Seed to Sip' this summer, which serves as a platform for our work and our global environmental goals,” Sembrot says. “We have more than 160 years of experience generating an impact not only across our business, but in the communities where we operate — from barley fields to bottling lines — by making our operations more environmentally sustainable. From researching drought-resistant barley, to making smarter decisions about how much and when to irrigate crops, to cleaning up our brewery city watersheds, we’re confident in our ability to brew a better world. Seed to Sip is not just a slogan, but is taking more visible root in our company. The new CNG tractor-trailers are emblazened with Seed-to-Sip imagery – a rolling reminder of our commitment to brew a better world.”

Turning a Vision Into Reality

Being a global company, Anheuser-Busch was able to draw on the success it had with CNG fleets in other A-B markets like Europe and Brazil to craft the roadmap for an American introduction. “The decision to convert the Houston fleet was driven by several factors: distance and frequency the tractors operate, refueling infrastructure, incentives and payback period,” Sembrot says.

“There’s also an obvious alignment of our global environmental goals with the Texas Emissions Reduction Plan, that we were more easily able to make the CNG conversion a reality,” he says.

For the past six months, the company has been testing two CNG vehicles and has seen positive results. By early 2015, all 66 of the new vehicles will be on the road.

“The proximity of refueling stations to our Houston brewery was one of the key reasons we were able to make this switch," Sembrot says. "The new fleet will be serviced by a Questar station located a couple miles away from the brewery.”

What’s more, these tractors are equipped with 12-liter CNG lightweight carbon fiber tanks and a clip-and-lock nozzle on the tank, and don’t require any personal protective equipment during refueling. That can put operators at ease with making a change.

The natural gas vehicles are being made available through Ryder’s participation in the Texas Natural Gas Vehicle Grant Program (TNGVGP), funded by the Texas Emissions Reduction Plan (TERP) initiatives and administered by the Texas Commission on Environmental Quality (TCEQ).

“Based on the results of similar Ryder fleets, we anticipate these CNG models will reduce carbon emissions by 23%, and we expect to see positive savings nearly immediately, certainly by early 2015. Those are substantial savings for our company,” Sembrot says.

“We commend the Anheuser-Busch team for their leadership and decision to convert their entire Houston brewery fleet to cleaner, more efficient natural gas,” says Dennis Cooke, president of global fleet management solutions for Ryder. “We are honored that Anheuser-Busch has trusted Ryder as its leasing and maintenance partner to help take this important step toward reducing the environmental impact of their fleet.”

“This is both one of our largest fleet conversions in Anheuser-Busch InBev’s global network, the company’s first conversion of an entire fleet in the U.S., and is leading the brewing industry overall,” Sembrot states. “We look forward to evaluating other markets’ potential for CNG conversions.”

Are you using alternative fuel technology to save cost or reduce your company's environmental footprint? Or do you have a suggestion for a future fuel-related topic for this column? Send your suggestions to jstoikes@acbusinessmedia.com.

Storage volume required per unit of energy is larger for both fuels. According to Scott Fiveland, GAS new technology manager, Caterpillar Inc., "LNG requires a volume of about 1.7 times that of diesel to store an equivalent amount of energy." CNG systems, depending upon the degree of pressurization, may require as much as four times the volume relative to diesel and 2.5 times relative to LNG.

Consequently, natural gas storage tanks and the more complicated fuel delivery systems add cost to the initial purchase price of a vehicle. “CNG requires roughly four to five times more chassis packaging space than the equivalent diesel volume, while LNG requires approximately two times the space,” says Roy Horton, Mack Trucks. “Due to the cryogenic nature of LNG, handling and facility impacts are also more challenging than diesel. And the new fuel management mindset required for LNG (use it or lose it) is also a negative.”

This makes adoption more difficult. “We do not see a demand for LNG within the vocational market,” says Horton. “The utilization rate for these trucks is typically not at a level that would benefit from this type of fuel. LNG is better suited for applications that have usage cycles and longer distance requirements.”

Greg Treinen, Freightliner Trucks, agrees, noting, “We have only sold a handful of LNG vehicles in straight truck configurations. The problem with LNG in vocational markets is that the trucks are not constantly running like over-the-road tractors. If LNG fuel is not used, you risk losing it because, as the LNG warms as it sits in the tank, it reverts back into a gas form and expands, causing it to vent out of the tank.”

“Storage issues — the fact that LNG vents when pressure/temperature increases — will drive customers to CNG over LNG unless they are in a high-fuel-usage application where a vehicle is in continual use,” says Nadine Haupt, Navistar.