Pe Ben merges a safety culture with the latest technology, including a Lytx video telematics solution. 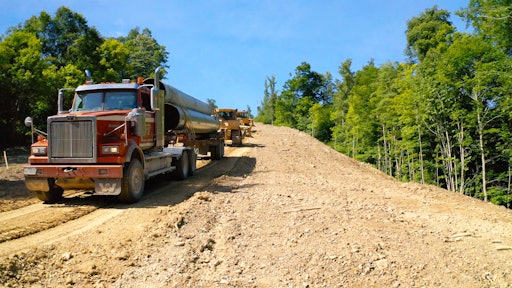 With the large pipe on their trailers, Pe Ben drivers have experienced incidents with other vehicles trying to pass and running into over-hanging pipe. They needed a system to discover the causes and protect drivers.
Pe Ben

Pe Ben USA is a leader in the planning, off loading, stockpiling and stringing of pipeline projects all over the U.S. The company has developed high-quality equipment and implemented safety standards that keep it on the leading edge of the pipeline industry. It has safely completed pipeline projects in some of the most extreme environments. 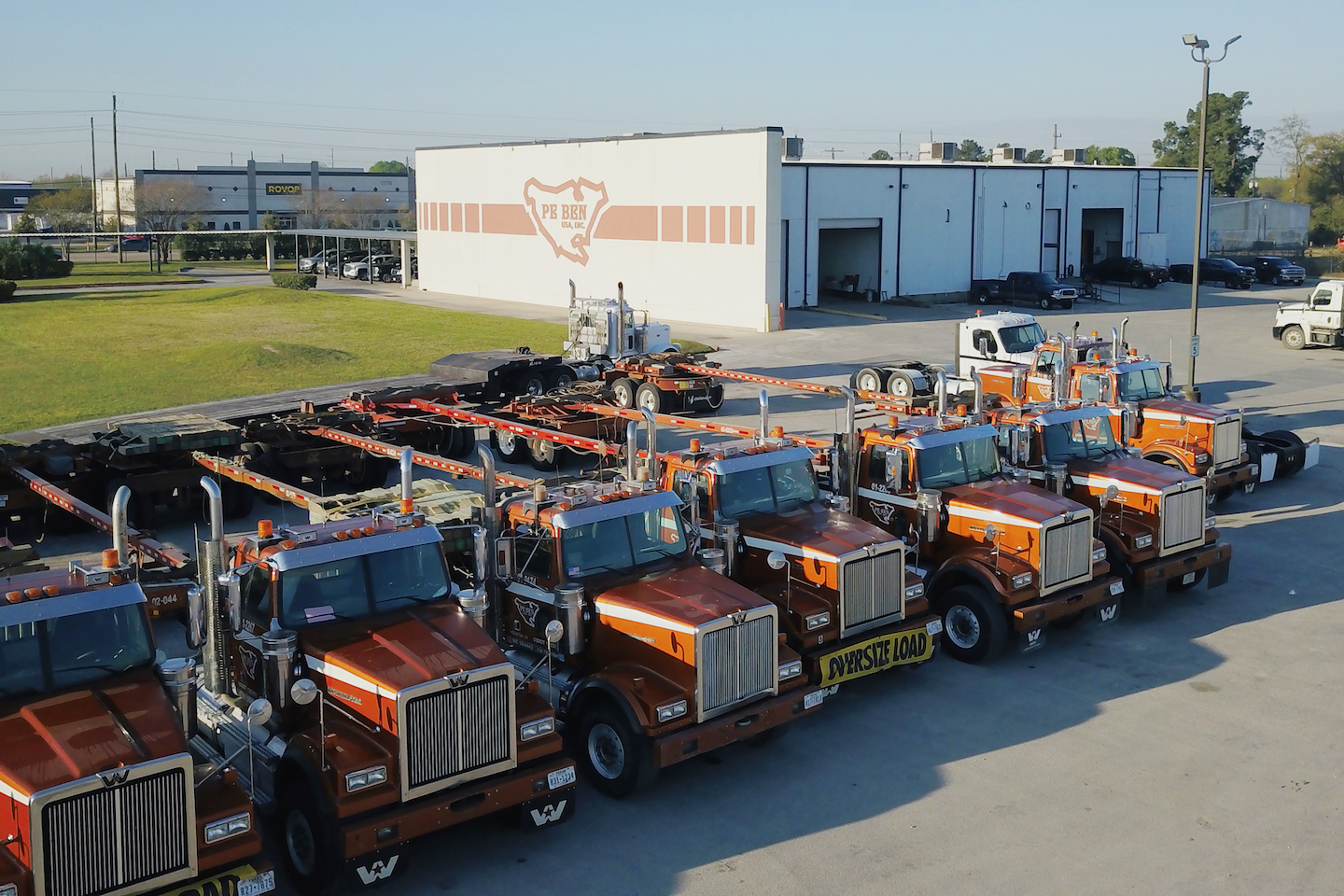 Transporting and stringing pipeline requires specialized equipment. This includes the trucks and specialized trailers.Pe BenAll of the tractors are Western Stars with high-powered diesel engines, and 90% of the trucks are less than three years old. The latest models have been ordered with Allison automatic transmissions to replace the previous 18-speed transmissions. “We are hauling maximum loads all of the time,” says Martin.

The trailers used by Pe Ben are unique and require a specialized skill set to operate. The self-steering pole trailers allow drivers to safely go around corners and make turns that other trucks are not able to complete. “It takes a specially trained driver to drive a stringing truck with a rear steerable axle,” says Martin.

Pe Ben is focused on the safe execution of every project and has a safety track record to back it up. “One of the things Pe Ben prides itself on is being a learning company. We’re focused on continuous improvement and what we can learn from every experience,” says Martin.

The safety emphasis comes from the top. “Everybody understands the top management is serious about safety. What we do is an inherently dangerous business if you look at it from an untrained eye,” Martin acknowledges. But when you understand the engineering and improvements made over the past 100 years in the pipeline business based on the knowledge of the people and on modern equipment, it has become a much safer business.

Even so, incidents still occur when transporting pipeline on public roads. With the large pipe on the trailers, Pe Ben drivers have experienced incidents with other vehicles trying to pass and running into over-hanging pipe. These collisions can lead to expensive claims. 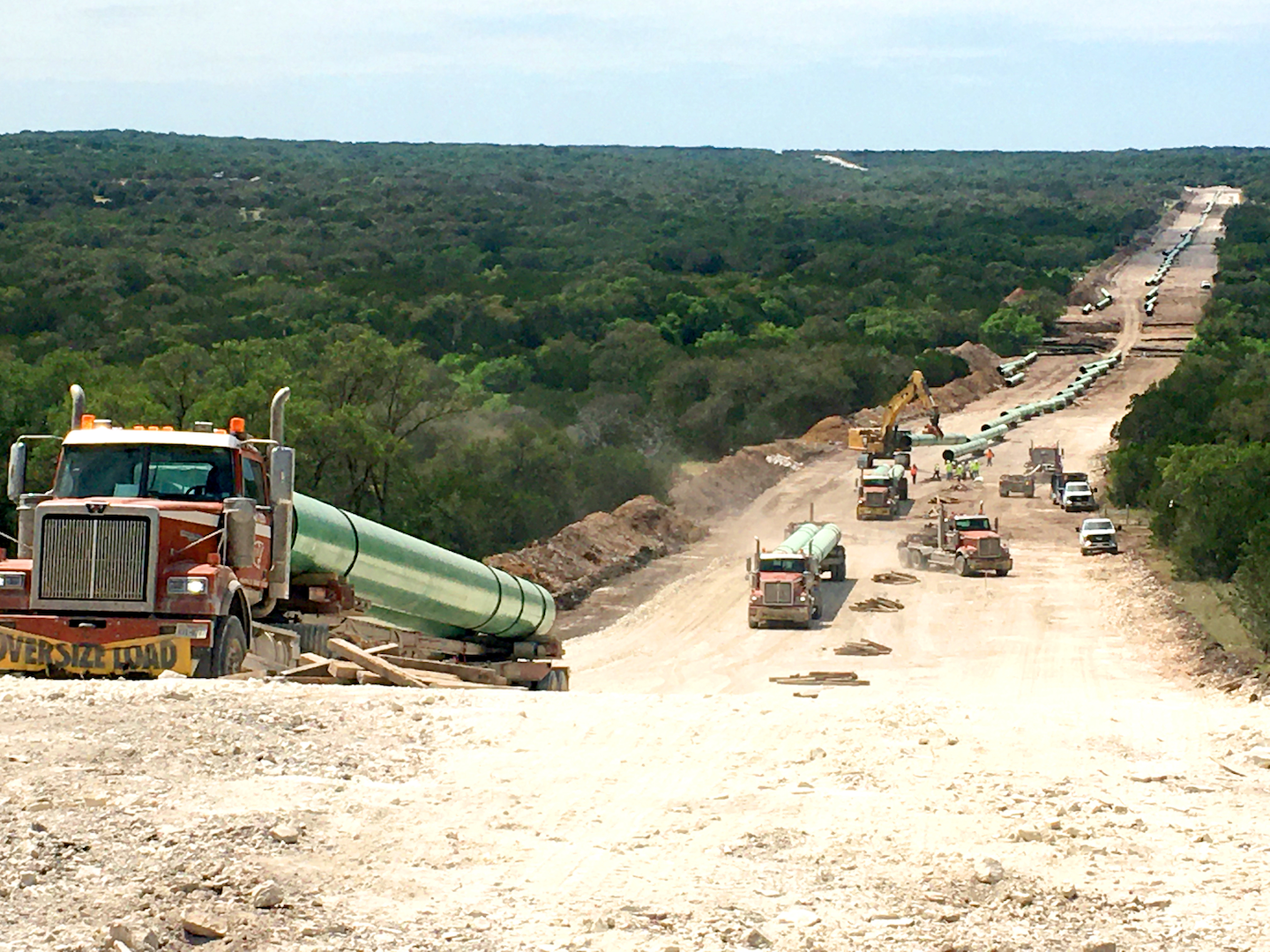 All of the tractors are Western Stars with high-powered diesel engines and 90% of these trucks are less than three years old. The latest models have been ordered with Allison automatic transmissions to replace the previous 18-speed transmissions.Pe BenPe Ben’s owner wanted to discover the truth behind these incidents. A video telematics solution promised to help provide an objective account of what happened.

“We asked ourselves what system would best meet our needs,” says Martin. “We started looking for the best system that was available.” Reliability and transportability topped the wish list, along with quality of the video and audio. “We rapidly narrowed it down to three companies. Of those three companies, we started talking to people in the trucking industry.” Lytx received the most positive reviews from the people Martin interviewed and he saw that a lot of companies were switching to it from other solutions.

But the final tipping point came from Pe Ben’s insurance broker, who gave Lytx a glowing recommendation. “That was pretty well the deciding factor right there,” recalls Martin.

Lytx is a leading global provider of machine vision and artificial intelligence-powered video telematics solutions for commercial, public sector and field services fleets. It worked with Pe Ben to install its devices across the pipe hauling fleet.

“At the time, we had trucks in Virginia, North Dakota and Houston, TX,” says Martin. “We had Lytx come out to each of those locations and show our technicians how to do the installs. They did the first two or three on trucks in the respective area.” The technicians were able to complete three to four installations a day in each location. “With a single device to set up, it seemed like a pretty simple process. For us, they were plug and play.”

There were a few modifications, including the passenger side sun visor and the installation of high-visibility seatbelt covers for the shoulder strap. The latter was necessary to ensure drivers weren’t getting penalized for not wearing seat belts due to it blending in with the color of their clothes.

Because Lytx is compatible with third-party camera systems, Pe Ben has been able to install left- and right-side cameras that synchronize with Lytx’s system. This provides a 360˚ view around the vehicle. “The majority of our accidents with these steerable trailers is what we call tailswing accidents,” says Martin. “Putting these cameras on the mirrors, we can see what happens behind the truck.”

Once installed and set up, the system has proven easy to manage. There is a single point person within Pe Ben that monitors the flagged events. “We have one guy who’s dedicated, though he has other responsibilities, as well,” says Martin. It is this person’s job to review the videos to determine why an event occurred and if there is an event where a driver needs coaching. “Lytx makes that easy for us,” says Martin.

The company plans to utilize the information gathered to gain a clearer picture of driver behavior around collisions. This information will be used to help protect the fleet and drivers retroactively against claims and proactively by coaching drivers toward safer long-term driving behaviors and habits.

Compared to other video telematics in which event capture is triggered by accelerometers alone, Lytx MV+AI (machine vision and artificial intelligence) enables fleets and empowers drivers to identify and correct significantly more risk, both inside and outside of the vehicle. 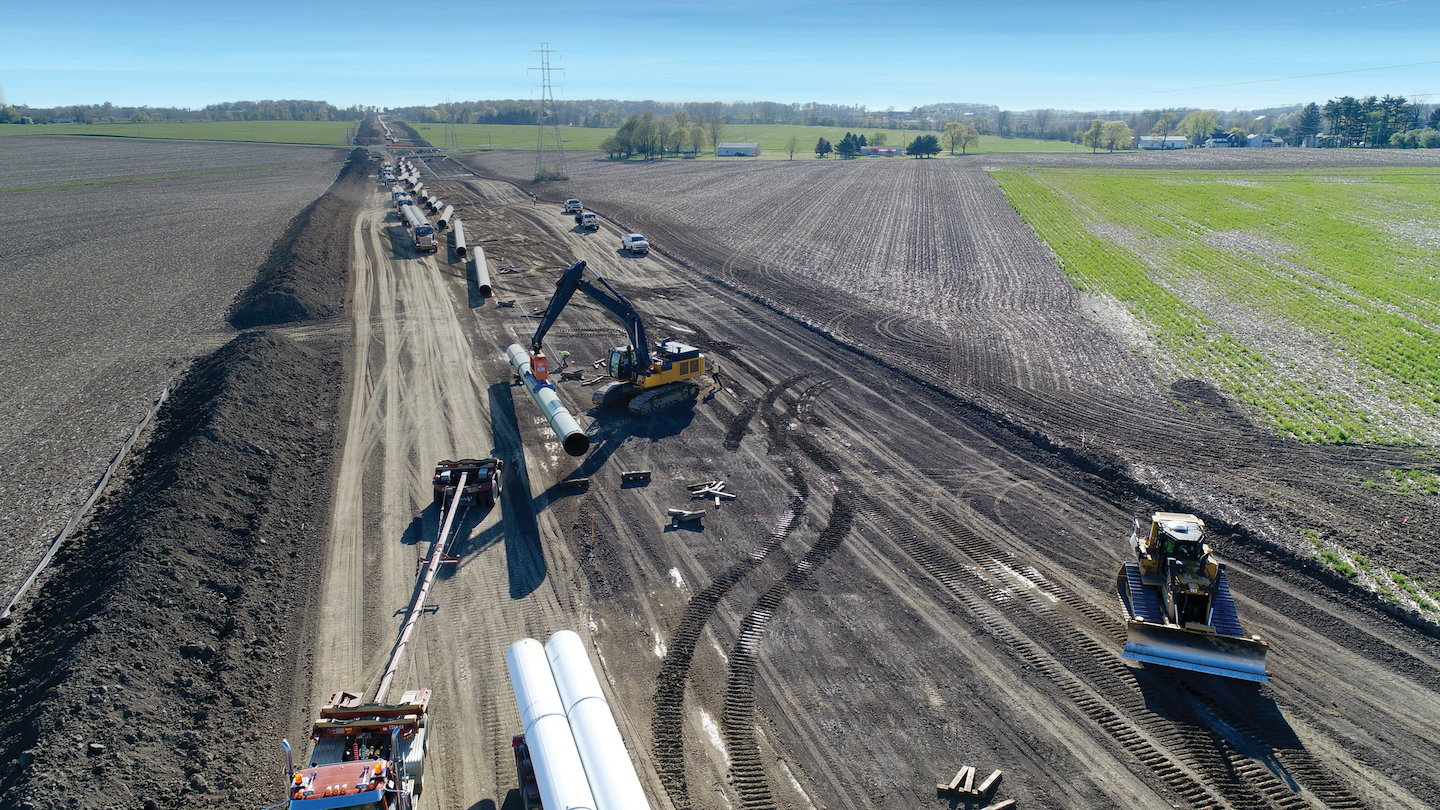 The company owns 100% of its fleet, which includes approximately 25 40-ton excavators, 40 vacuum lifts, 90 vacuum shoes, 216 tractors and 225 pole trailers.Pe BenImplementing a system that can record driver behavior may create concerns for some drivers. For instance, the Lytx system not only provides video evidence to help exonerate innocent drivers, it also reveals risky behaviors the fleet could focus on to improve long-term performance. Pe Ben found that when drivers are familiar with the system and its benefits and focus on their safety, they see it as empowering.

Tying into the vehicle’s engine control module (ECM), the system can identify more than 60 risky driving behaviors. Martin explains that they are not monitoring all 60 driver behaviors, but have tailored the system to focus on a few that have a larger impact on their business.

“We have a core group of risky behaviors we focus on,” says Martin. “Some are riskier than others. The system allows coaching opportunities for the core group of offenses and our focus is on improvement and driving positive change vs. being punitive.”

Pe Ben does have a progressive disciplinary program, however. “The first time a driver reviews the video with their foreman, who ends up being their coach,” says Martin. “If the risky behavior reoccurs, we send a copy of the video to the driver and discuss it again. If the risky driving behavior occurs again, drivers are aware they will likely be terminated for up to six months.”

The system offers real benefits. “It does have a positive aspect to driver behavior modification and improving safety,” says Martin. The most important part has been protecting drivers from false claims. “Within 10 minutes of me receiving a complaint call, I can have a video in hand that I have already sent to law enforcement after an incident or a complaint. It tells the truth.” In the vast majority of cases, it has exonerated Pe Ben’s drivers.

Communicating the goals of installing this system on its trucks with the drivers was vital to the program’s success. Martin recalls that Lytx was very good in the onboarding process. The company advised Pe Ben on how to best implement the system and supported change management with drivers.

“For us, our newer drivers are accustomed to the technology, and we needed to be particularly mindful of the change it could represent for our most experienced drivers,” Martin notes. “Unfortunately, we lost two long-term drivers.”

But within 30 days of the rollout, the drivers began to accept the technology. They quickly discovered it protects the driver just as much as it protects the company. “Once they realized that we weren’t out to get them and that instead the technology was for their protection, they have really learned to appreciate the program.” 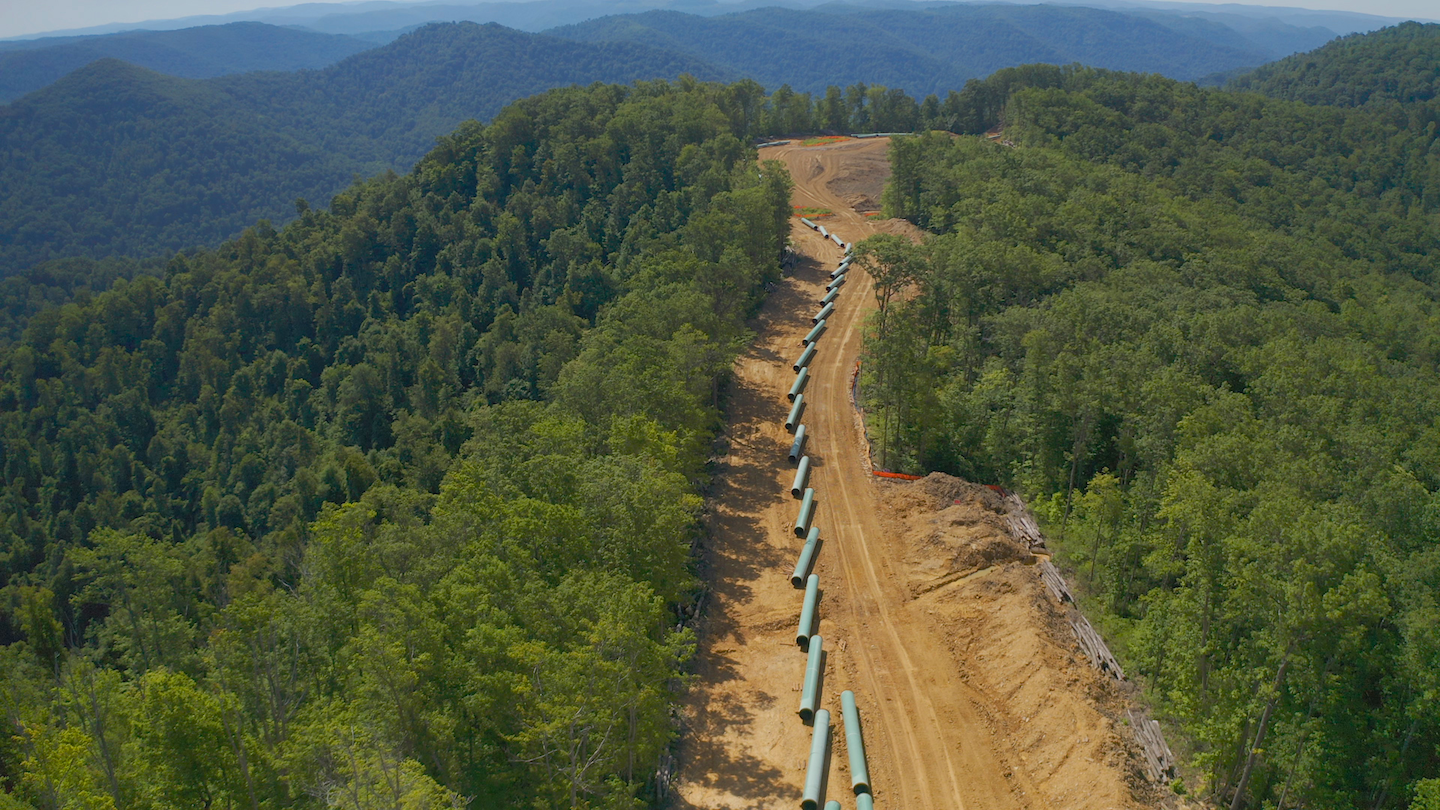 Pe Ben has safely completed pipeline projects in some of the most extreme environments. This success is partially due to possessing the best equipment for the job.Pe BenContrary to drivers’ perception, drivers are not being constantly watched. When an event occurs, such as harsh braking, it triggers an event with a 12- to 15-second video clip. “If we need to go back and look at the 30 minutes prior to the event or 10 minutes after the event, we have the ability to do that,” Martin explains. “But drivers are not being watched the entire time.”

The more drivers who have been exonerated by the video from false claims, the greater the acceptance that this tool is really there to help them. “The word is really getting around about how much the system benefits drivers,” says Martin.

Results Speak for Themselves

Lytx provides access to up to 100 hours of continual video, which clients can easily locate, clip and download themselves. Martin and his team can now quickly access video of incidents to see what really happened and resolve situations faster.

“Law enforcement has really been receptive to us sending them the videos to show what actually happened during a collision or if there are complaints,” says Martin. The results have been very revealing. At the time this was written, Pe Ben had 24 complaints reported; 22 of them were determined to be unfounded. “That’s 92%.”

The result is an impressive return on investment. “You take one major collision, and if you are exonerated from it, the system pays for itself,” says Martin. “The systems basically sell themselves when you look at it from my position.”

The ability to quickly determine what happened gives Pe Ben the piece of mind to work anywhere in the country.