Engineer and businessman Eldon D. Jones -- inventor of the the Lo-Boy hoist -- passed away at age 90 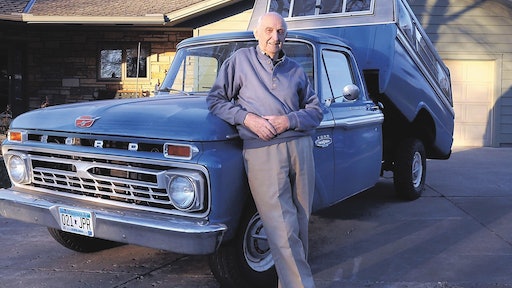 Eldon Jones invented the Lo-Boy hoist, which went on to become the industry standard for truck hoists. Based on that product, Jones and his wife, Helen, founded Crysteel Mfg. in 1969.

Inventor, engineer and businessman Eldon D. Jones has passed away at the age of 90. Jones was the founder of dump body and hoist manufacturer Crysteel Mfg. and the inventor of one of the most recognized pieces of equipment in the dump body industry, the Lo-Boy hoist. The Lo-Boy hoist design went on to become the industry standard for truck hoists, and based on that product, Jones and his wife, Helen, founded Crysteel in 1969. A year later, a Small Business Administration loan allowed them to open a facility in Lake Crystal, MN. In 1980, the company began manufacturing dump bodies based on Jones’ designs.

Today, Crysteel has a network of more than 140 distributors across the United States and North America. Crysteel General Manager Joe Paulsen sees the impact and influence of Eldon Jones every day.

“We have over 160 current employees and countless former employees from the Lake Crystal facility that owe so much to Eldon for what he started," said Paulsen. "The impact that Eldon and Helen have made in the industry and to the local Lake Crystal community has been monumental. Eldon was an amazing individual who will be truly missed.”

Jones retired as president of Crysteel in 1990, with Helen succeeding him. In 1994, their son Peter became president, and in 2005, Crysteel was acquired by Truck Bodies & Equipment International, Inc. (TBEI). Though retired, Eldon still maintained his inventor’s spirit by continuously coming up with new ideas, and working with Crysteel and TBEI engineers to bring his ideas to fruition right up until the time of his passing.

TBEI President & CEO Bob Fines said, “In terms of this industry, Eldon Jones’ name is synonymous with quality, innovation and hard work. Eldon is very well known and respected for his accomplishments. He is that rare breed of individual that is able to take an idea and turn it into something special. He will be greatly missed, but his achievements will stand as an impressive and enduring legacy.”