The science behind the art of paving. 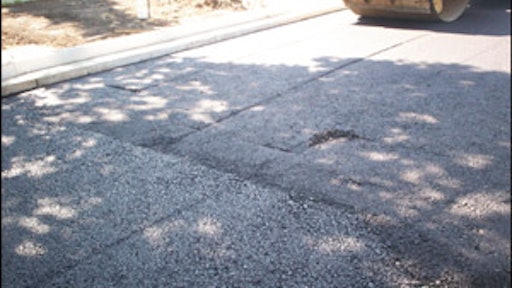 On almost every asphalt paving project, the crew spends the first part of the day or night setting up equipment. This set-up time can range from a few minutes to nearly an hour, depending on the condition of the equipment in the paving train and also the complexity of the application. Material conveyors or material transport vehicles, pavers, and compactors all need to be prepped for the hours of use to help ensure their uptime. However, it is not until the equipment is actually working that the crew is able to fine-tune operation of the paving train to produce the best quality pavement. Reading the mat or visually recognizing pavement defects in order to make equipment or process adjustments is one of the most important techniques for any crew to learn and master.

Complications
A finished pavement that earns full pay, plus all available incentives, is not easy to build. All variables in mix production must be carefully monitored to manufacture a homogenous blend of aggregates and fines (mineral fillers), plus asphalt cement and modifiers. Loading the mix into haul vehicles and its transport to the paving project should follow industry-recommended best practices; the hot mix asphalt (HMA) needs to arrive at the site hot to allow for proper laydown and compaction.

Preparing equipment for the HMA paving application requires attention to detail. Set-up of the paver is especially important, and can be particularly challenging. Most paver checks actually begin with visual inspection of the tractor to make certain of its readiness for safe operation. A complete walkaround should be done before the engine is started. Additionally, the screed must be examined and pre-adjusted for the application as proper screed set-up can actually save effort and time. This is typically done based on a crew's experience with similar applications, preferably before the screed pre-heating process is started.

It is only after "pulling off the joint" that the screed's set-up can be visually verified so the new pavement exactly matches a specified profile or the adjacent pavement surface. The operation needs to be tweaked often, even when the paver has been properly aligned and the screed has been set onto starting blocks positioned to compensate for anticipated roll-down of HMA during compaction.

The next challenge is to properly recharge the paver hopper with HMA. The truck driver needs to stop with the rear tires of the vehicle just ahead of the paver. Some paving crews assign a person to control positioning of the haul trucks or proper alignment in front of the paver and to keep trucks from bumping the paver. Even the smallest bump can create a depression behind and beneath the screed. These bumps can often be felt by traffic and may also be measured by a profilometer. Subsequent rolling may not fix this surface defect.

Paver and screed operators must closely watch the appearance of the pavement surface during the paving operation because it is easier to correct a minor deficiency as it occurs. It becomes more difficult to fix a defect after the pavement has been compacted. Operators work to control the amount of material in the hopper with an uninterrupted flow of mix through the tunnels to the augers.

Some contractors use a nuclear densometer to check density of the newly paved panel behind the screed. By confirming uniform density across the width of the panel, subsequent compaction can more easily achieve percent within limits (PWL) target specifications for the project.

There are many reasons why uniform density may not be achieved. Lack of uniform density can be due to problems at the plant, loading of the haul vehicles, transport, delivering the mix into the paver, or even paver set-up and paving practices. Even laborers on a paving crew can create problems through mix-handling techniques. At times, even the best compactor train is hard-pressed to compensate for non-uniform density in the pavement prior to rolling. This can make achieving uniform final density in the pavement unlikely.

Resolution
Most pavement defects can be solved in-process, by following the adage, "If we can see it, we can fix it." All members of the paving crew need to be trained to look for deficiencies as they perform their duties. And they should realize their responsibility to advise the appropriate crew member so the deficiency can be corrected immediately. The following are examples of common pavement defects, their causes, and resolutions.

Angular depressions in the mat mirror the outline of the main screed plate and its rear-mounted, hydraulic extensions. What caused the marks? The haul truck bumped hard into the push compactors on the paver, shoving the screed back and down. Even though the mat had cooled to less than 200¢ª F before the mishap, compaction did not completely remove the marks.

One of the paving crew members stepped off the back of the screed walkway onto the hot mat, resulting in footprints in the mat, visible prior to rolling. Even though the depth of these marks diminished after each pass, the breakdown compactor was unable to completely remove the marks. It is likely that a profilometer running over any of these slight depressions will indicate their presence. There is no reason to walk on an uncompacted pavement, and it should be avoided.

The marks in this base course actually have two causes. The lower mark is a drag mark caused by cool material sticking to the screed. The higher mark is a surface depression from insufficient mix under the screed. Low head of material in front of the main screed led to localized lack of material in the right portion of the auger chamber.

The well-trained and experienced paving crew can recognize paving defects such as those described above and take corrective action before excessive mix has been laid. This helps to achieve more uniform material density, smoother pavement surface finish, and more uniformity in results. In the end, a better job is produced, and the pavement lasts longer.

Sometimes there is no need to wait to see defects in the pavement surface to stimulate an adjustment to the paver or screed. These situations, as pictured, should immediately alert the operator that the head of material is out of balance between the main screed and extension. A wide gap between the pre-strike-off plate and the end gate of the screed extension will affect the pavement surface. This gap should be no wider than 8 to 12 in. (200 to 300 mm) under normal set-up. At times during paving, the mix built up so high that it spilled over the strike-off plate into the area ahead of the screed extension, overloading this area with mix and causing the screed extension to rise. This is an example of bad paving practice.

The application of placement and compaction of HMA only allows one chance to do it right. If best practices are not followed during paving, a penalty is paid. Whether that penalty is a reduction in payment for the work or a requirement to remove and replace the deficient pavement, the cost is severe. Doing things right the first time benefits agency, contractor, project owner, and taxpayer. Doing things right also minimizes traffic delays and reduces complaints from motorists for a win-win proposition.

Information for this article was provided by Ingersoll Rand's Road Institute, located in Chambersburg, PA, and the newly opened Road Institute West, Phoenix. Ingersoll Rand conducts three-to-five day training sessions at both locations throughout the year.