Project will improve traffic flow and add capacity on Interstate 65 from State Road 2 to U.S. 30 in Newton and Lake counties. 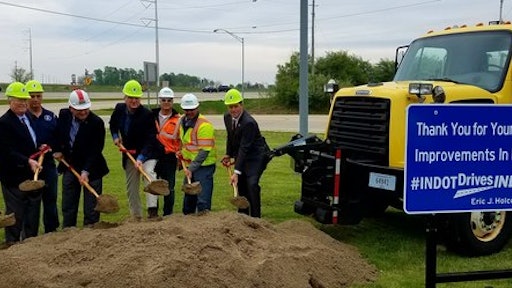 “Projects like this I-65 expansion in Lake and Newton counties do more than ease morning commutes—they help our state move at the speed of our 21st century economy," Gov. Holcomb said. "With a new long-term plan to fund transportation, Indiana can pursue more investments in our roads, bridges and other infrastructure to improve the lives of Hoosiers and make our state a jobs magnet.”

The ceremony was held at the Lowell weigh station, located near the south end of the construction zone. Pre-construction activities are underway, and substantial construction is slated to start on or after June 1, 2017.

“This project will improve safety and ease congestion on one Indiana’s busiest interstate segments and represents a significant investment in the Region’s transportation network,” INDOT Commissioner Joe McGuinness said. “Adding new travel lanes and upgrading existing infrastructure on I-65 in Northwest Indiana will greatly improve the user experience for motorists who travel this busy corridor.”

The project also includes rehab and/or resurfacing of the overpasses at 93rd, 113th, 113th and 153rd avenues and mainline I-65 bridge work at 109th Avenue, U.S. 231, S.R. 2, Beaver Dam Ditch and Wirtz Ditch. Because the project is being constructed on an accelerated timeline, work is expected to be completed in the fall of 2018, 18 months earlier than previously expected.

The I-65 Northwest Indiana Expansion project is part of Major Moves 2020, an initiative fast tracking the widening and rehabilitation of heavily-traveled highways across the state. More information can be found at the project website, www.I-65Northwest.com.