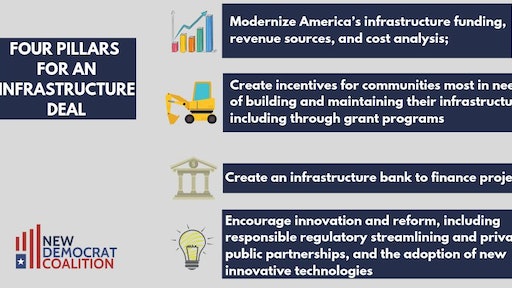 New Democrat Coalition Members, led by Infrastructure Task Force Co-Chairs Stacey Plaskett, Jason Crow, Elissa Slotkin and Salud Carbajal, sent a letter to President Trump urging him to recommit to working with Congress on comprehensive and bipartisan legislation to bring America’s infrastructure into the 21st Century. Modernizing America’s aging infrastructure is  essential to creating jobs, spurring economic growth and increasing our global competitiveness. As one of the most immediate ways Americans interact with their government on a daily basis, we must work across the aisle to rebuild, repair and expand our nation’s infrastructure.

“As the U.S. House of Representatives continues to work on a much needed infrastructure package, the New Democrat Coalition urges you to recommit to working with Congress on comprehensive and bipartisan legislation,” the letter reads.

The Members call for modernization and innovation in funding and financing of our nation’s infrastructure; increased project-based funding to support community ownership of local development; technological innovation and regulatory reform, including multi-use corridors and the implementation of outstanding provisions of the FAST Act; and dedicated support for projects focused on efficiency and climate resilience.

Last Congress, the New Democrat Coalition’s Infrastructure Task Force set broad priorities in “Four Pillars for an Infrastructure Deal.” The Coalition shared its proposed plan with the Administration. The plan would:

The New Democrat Coalition is eager to take advantage of this opportunity to deliver on this shared priority important to the American people. Afterall, nobody cares about party affiliation when sitting in traffic.