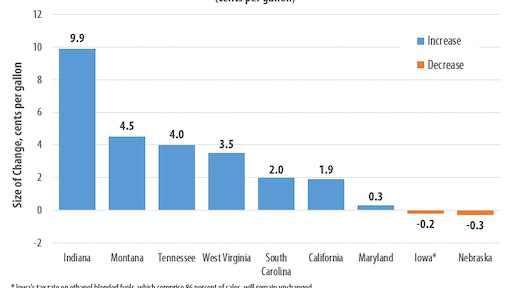 With no increase in the federal gas tax since 1993 and President Donald Trump still just talking about his $1 trillion investment in infrastructure, states are unlikely to get an influx of new cash anytime soon.

So in 2017, eight states (South Carolina, Tennessee, Montana, Indiana, California, West Virginia, Maryland & Oregon) have taken matters in to their own hands approving gas tax increases and immediately putting that money to good use. Here’s how:

Indiana is raised its gasoline tax rate by 9.9 cents. The Legislature passed a package of tax and fee hikes during the session that ended in April, including a 10-cent fuel tax increase that took effect on July 1.

Immediately after, the state announced a five-year $4.7B infrastructure plan. The projects on the list include efforts to rehab 1,295 bridges, resurface 9,628 miles of road and add an additional 122 miles of roadway, according to state figures.

California is boosting its gas tax rate by 1.9 cents because of a formula that ties the rate to the price of gas. More significant, however, will be the 12-cent gas tax increase and 20-cent diesel tax increase that will take effect on Nov. 1, 2017 because of legislation enacted this year.

However, Caltrans isn’t waiting for the gas tax hike in November, they are getting ready to get to work on California’s roads. Caltrans will have $5 billion for road repairs and are gearing up to hire over 1,000 new workers. The gas tax is expected to raise $52 billion over 10 years.

Montana increased its gasoline tax by 4.5 cents, the first gas tax increase in 23 years. The tax is expected to bring in an additional $29 million this year, more than half of which will go to cities and counties for local road-related construction.

Tennessee boosted its gasoline and diesel tax rates by 4 cents, the first adjustment in Tennessee’s gas tax rate in over a quarter century, going back to 1989.

The tax increases were estimated during the legislative session to provide an extra $250 million per year for the state’s road construction and maintenance program, plus $70 million that will go to county governments and $35 million to city governments.

West Virginia raised its gasoline and diesel tax rates by 3.5 cents. The increase was part of two bills signed in to law this year that support the Governors highway financing and construction plan. These plans are expected to create nearly 48,000 jobs in the state.

South Carolina had one of the lowest and most outdated gas tax rates in the country, having last been updated on Jan. 1, 1989 but increased its gasoline and diesel tax rates by 2 cents each.

More than $600 million a year is expected once the full increase is implemented, and the South Carolina DOT already has plans for some of the early spending including investing $50 million in the Rural Road Safety Program to repair highways across the state. The first phase of improvements has been approved along routes including U.S. Highway 76 in Richland County and U.S. 29 in Anderson County.

Maryland raised its gasoline and diesel tax rates by a modest 0.3 cents each because of a forward-thinking inflation indexing law that former Gov. Martin O’Malley signed in 2013.

New Jersey increased its diesel tax rate by 10.8 cents on July 1, though its tax rate on gasoline will remain unchanged. This is the final stage in a series of increases scheduled under legislation from 2016 where the state enacted a 23-cent gas tax hike, along with increases in diesel fuels and non-motor fuels, to produce $1.23 billion annually to finance an eight year, $16 billion transportation program.

Fiscal conservatives who have been afraid that forcing their constituents to pay more at the pump will get them forced out of office are being proven wrong this year. In total, 26 states and the District of Columbia have enacted legislation to raise the gas tax in the past four years and a recent Bloomberg poll showed that a narrow majority (55%) of Americans would support an increase to help fix crumbling roads and bridges in their own states.

However, states are also grappling with the fact that today’s cars and trucks can drive for longer distances on less fuel, and a small but growing number of vehicles don’t run on gasoline at all so there is still work to be done in finding ways to fund our roadways. Until we find that funding, raising the gas tax is an immediate solution to our growing infrastructure problems.

Would you support a gas tax increase in your state? Why or why not? Let me know at jstoikes@acbusinessmedia.com