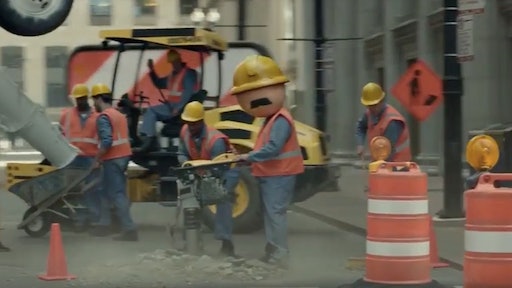 Recently, the smart phone navigation company Waze has been partnering with car companies to make drivers more aware of when they are coming into a construction work zone. While we applaud these efforts and thoroughly appreciate that companies are working to make people more aware of workers, we were recently concerned by what we saw in a commercial that features Waze partnering with Lincoln vehicles.

In the commercial, drivers are on the road and various hazards pop up along their route. The hazard is shown on the smartphone and then the drivers look up and see it in the real world. One such hazard is a construction zone where you see a construction workers head on the phone, portrayed as a cartoon and then the workers out in the field with that exact same head.

My initial thought was that of anger. Are they trying to compare these construction workers to a cartoon? These people put their lives on the line every single day to build our roads, buildings, bridges and the homes we live in. Why on Earth would they think it was okay to reduce them to a cartoon character?

Do the know that over 650 men and women died building our roadways in the last five years alone? Countless more have been injured and all of that is because of distracted driving. And since over 54% of highway contractors reported that motor vehicles had crashed into their construction work zones during the past year, we should maybe focus on keeping people off their phones in work zones instead of laughing at them in a commercial.

Yes it's true we should continue to raise awareness of work zones, but I don't think a cartoon character face placed on a real person's head who is working hard to make our roads better is going to get the message across.