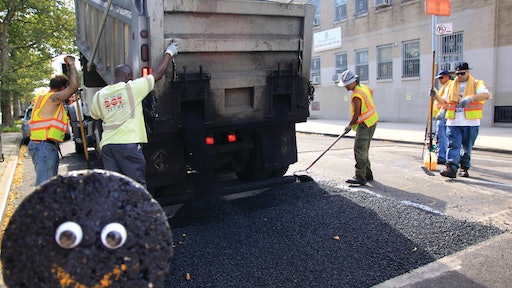 Let's face it. When we see orange barrels and road work signs, the first thing we think about is how it's going to slow us down. If you really think about it though, would you rather be slowed down a few minutes one day, or hit the same stinking pothole everyday on your drive in? I think we all can agree that potholes are more evil than the construction workers trying to fix them. Still, when you have overwhelming repairs, you're going to get complaints. Especially from residents of one of the country's toughest cities.

New York City experienced a severe winter in 2011 - where record snowfalls, rain and fluctuating temperatures took their toll on the streets. New York City Department of Transportation (NYCDOT) Commissioner Janette Sadik-Khan worked closely with Mayor Bloomberg to dedicate an additional $2 million to road repairs. The Roadway Repair and Maintenance (RRM) division was on a mission to repair the streets, filling the potholes in record numbers. In fact, at the peak, the crews were repairing more than 4,000 potholes everyday. Don't we wish sometimes that our cities would fill just ONE?

The NYCDOT wanted a way to communicate these accomplishments to the public, and rightfully so! They took to social media as a platform to showcase the work the crews did and their Tumblr website has been an overwhelming success. Launching in February of 2011, the Daily Pothole now has over 16,000 followers and has been featured in several news outlets, including the New York Times.

"Tumblr seemed like the perfect tool to bring these stats front and center," says Robin Lester Kenton, Director of Strategic Communications for the NYCDOT. "It allowed us to take something that many New Yorkers find annoying (potholes and road repair) and flip it on its head, making it playful, fun and engaging."

Lester Kenton says that initially the crews were hesitant to get involved. "A lot of times, they are treated poorly on the streets by motorists who blame them for slow traffic. But once they saw the positive response, they really got into it." In fact, the crews themselves are now responsible for taking photos in all five boroughs of NYC. "They are extremely proud of the work they do on the street and they're excited to have their work featured," she adds.

Once photos of the jobsite are taken, an RRM staff member emails them to the NYCDOT Strategic Communication Division with the location and some information on the job. The Strategic Communication team members take it from there, editing the photos, creating copy and posting. The blog takes a conversational tone and speaks through the eyes of an asphalt sample with a smiley face on it named Warmy. He’s featured on jobsites, in comic strips deploying paving crew heroes to potholes and promoting safety messaging.  How can you not smile when you see that?

"Occasionally, one or two of the Strategic Communications staff members will go out in the field with a crew if the job or topic is unique," says Lester Kenton. "For example, we recently highlighted our record number of speed bump installations, and we sent a staffer out to the field every day for a week with a good camera to make sure we captured the details."

Another unique topic that especially piqued our interest was their use of 100% recycled asphalt pavement (RAP) on a project. NYCDOT uses plenty of RAP on their roads, annually incorporating over 400,000 tons of RAP, eliminating the need for 840,000 barrels of crude oil used in production. But 100% RAP is something entirely different – and amazing for the environment. They're headline alone (What's Black as Night and Green All Over) was enough to make anyone wonder what the heck they were talking about.

NYCDOT's Queens paving team paved half of a street on Jewel Avenue & 147th Street in Kew Garden Hills using 100% RAP. With this street, the NYCDOT will test the durability of 100% RAP on larger surfaces - they currently already use RAP in durable pothole repairs. Over the next several months they'll see how the RAP holds up under heavy traffic and weather conditions. If it works, they'll use it more.

No matter what the topic, many New Yorkers are not an easy to please bunch. The Daily Pothole website has not only raised awareness, but received a great response from the public. "The response has been overwhelmingly positive," says Lester Kenton. "First, the public is impressed that a city agency is even on Tumbler. And then they are surprised, in a good way, that we are creating such unexpected content." Take a look at just a few of the comments from followers:

Thecount: Another reason to love this city

Idlewild: I love this Tumblr and I don't even live in New York.

We love it too and can't think of a better way to get a community actually excited for road work. According to the site, they have resurfaced over 1.8 million square yards of pavement - that's 28 lane miles of asphalt - since July 1st. They're also setting a pace of repairing over 8,000 potholes a month with a total of 25,603 potholes having been repaired since the first of July. Wow! If you haven't already, be sure to check out the site at www.thedailypothole.tumblr.com and let them know what you think.

Construction work, especially road work, is one of the hardest jobs out there. The men and women work in extreme weather, under dangerous conditions and rarely get the recognition they so deserve for making our streets safe to drive on. This site is a great way to give a face and a personality to those workers out there who are trying to do their job, and do it well. Try to keep them in mind the next time you grumble about a delay because roads are being repaired.

"The Daily Pothole has been a great learning experience for us," Lester Kenton concludes. "It has proven that New Yorkers are genuinely interested in the work that we do, and that the public response really can be different based on how information is presented."

NYCDOT encourages residents to report potholes via the Daily Pothole Tumblr website, a Smartphone app (NYC 311) or by calling 311 from your phone.  Take note state DOT's. This is how you gain interest for the road construction you're doing and support for all that still needs to be done.