Commercial and industrial construction has the longest backlog at 8.91 months; backlog in infrastructure has been slipping since the stimulus package ended 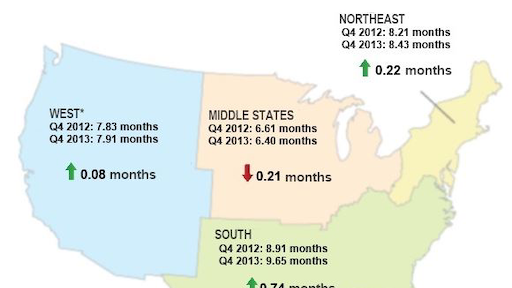 Throughout last year, average backlog expanded in the Northeast, South and West but dropped in the Middle States.

Associated Builders and Contractors’ (ABC) Construction Backlog Indicator (CBI) hit a post-recession high in the fourth quarter of 2013, growing from 8.2 months to 8.3 months (1.3 percent). Compared to a year ago, CBI is 3.9 percent higher -- up from 8 months at the end of 2012.

“CBI indicates the final three quarters of 2013 were a period of progress for nonresidential construction,” said ABC Chief Economist Anirban Basu. “Although other indicators have not been quite as positive -- nonresidential construction spending has risen only sporadically in recent months -- the first quarter’s bitter weather likely means some construction activity has been put off, which means the positive trend reflected in this CBI will likely continue.

“Although CBI’s pace of expansion should be enough to keep the nonresidential construction recovery going, there are significant headwinds for the industry,” Basu said. “The December and January job reports show the economic recovery is sporadic and uncertainties surrounding the health care law also are likely to slow full-time job creation for several reasons, some of which were highlighted in a recently released CBO report. Sequestration, though recently relaxed, still constrains federal spending growth, and many state and local governments continue to wrestle with burgeoning health care costs and underfunded pension liabilities.

“Expansion in segments such as energy production, industrial production, social media, robotics, international trade and online retail along with strong expansion in states like California, Colorado, Florida, Texas, Utah and Washington should lead to greater opportunity for contractors in 2014,” Basu said.

While backlog based on industry segments stayed fairly steady on a quarterly basis, commercial and industrial construction has the longest backlog at 8.91 months. Backlog in infrastructure has been slipping since the stimulus package effectively ended.

While the fourth quarter 2013 CBI is a post-recession high, nonresidential construction spending volumes are still down by one-fifth since the fall of 2008. ABC’s forecast that GDP will expand in the range of 2.4 to 2.6 percent in 2014 remains unchanged.