Caterpillar's first Tier 4 Final machine will be displayed, along with the new CT660 vocational truck and K Series wheel loaders. 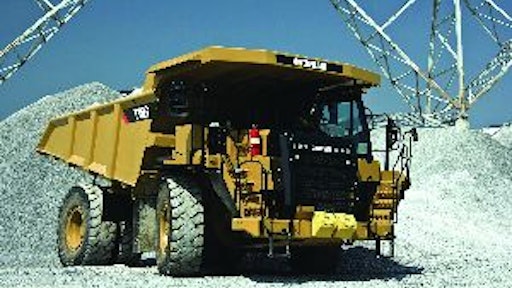 The G Series 775 off-highway truck will be the first production machine in Caterpillar's lineup to offer a Tier IV Final emissions solution.

To be sold and serviced by North American Cat dealers, the CT660 will be shown in a variety of configurations in Caterpillar's North Hall and Gold Lot exhibits. A new G Series 775 off-highway truck will also garner a spotlight as the company's first machine to go into production with a Tier 4 Final emissions solution. Many other machines on display, such as the wholly redesigned H Series 627 wheel tractor-scraper, will incorporate integrated Tier 4 Interim-compliant solutions.

Other models shown will include five K Series midsize wheel loaders (950K to 980K) offering improved performance and fuel efficiency. The debut of the E Series hydraulic excavators will include the 336E, which features more net power than its predecessor for faster digging and loading. The upgraded M2 Series all-wheel-drive motor grader has a wider variable horsepower range. Adjustable engine speed control is said to improve the AP1055E asphalt paver's fuel economy.

As an added bonus, look for live and video presentations, including a visit from Mike Rowe, the star and originator of the Dirty Jobs television program.

The Gold Lot exhibit will include small machines for general construction and specialty trades, as well as displays representing the company's commitment to building machines that benefit current and future generations.

For the latest information on the exhibits and the products to be featured, go to www.cat.com/conexpo, or turn to The Big Show section at ForConstructionPros.com.

Contractor Talks About Benefits of His Caterpillar Trucks