Grading the Roads of "Sugar Land" 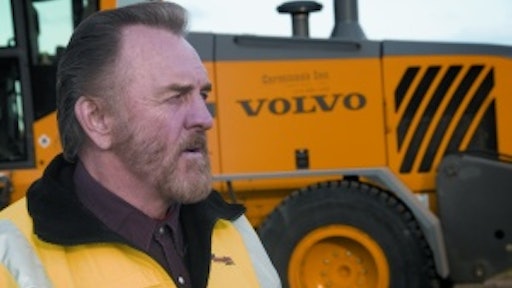 The livelihood of this area is dependent on a successful growing year and harvest. Getting crops from the ground to the production plants requires many, many trucks running day and night, seven days a week. That kind of continuous traffic and weight on unpaved roads around the fields can make them virtually impassable in a matter of hours. That's where Dale Cormican comes in.

Keeping beets on the move

Cormican is a true trade veteran with 60 years of experience. He and his sons operate Cormican Inc. in Mentor, Minn. The majority of its business involves laying down base on roadways for federal and state projects. Besides roads, Cormican Inc. has also done grading work on commercial construction sites and wind turbine farms.

Since 1979, Cormican Inc. has been using its fleet of motor graders to groom the roads in and out of the Red River Valley during the annual sugar beet harvest. Because of the importance of the harvest in the area, the state DOT and local townships permit trucks to go over road weight limits. According to Cormican, one truck can weigh up to 97,000 pounds, and there can be hundreds of trucks running back and forth on a given day. Cormican and his sons run four motor graders together to grade the roads.

"The roads get beat up pretty bad during sugar beet harvest," said Cormican. "We have graders blading them pretty much around the clock. This [past] year has been particularly wet, which makes it very difficult to keep the roads in good shape."

In the 1940s, Cormican's grandfather introduced him to a motor grader. In the 1970s, Cormican bought his first grader and has purchased numerous units over the years. The last six have been Volvo models. His current fleet includes two Volvo G990s and a Volvo G940.

"My grandfather's grader was pretty barbaric compared to what there is now," saysCormican. "It had all manual controls and no power steering. Just to turn a corner, you had to lean the wheels because the tandems would be locked up. And it needed a pony engine to start it."

In the 60 years since his first ride with his grandfather, motor grader technology has significantly advanced.

In Cormican's opinion, the biggest change was the introduction of an articulated frame in the mid-1970s. For him, that redefined the grading process. But that is just one of many enhancements over the years.

"How motor graders have changed is really something," Cormican said. "The improvements over the last 60 years are unbelievable."

Some of the new advancements are a benefit to the job in Cormican's opinion, and some not so much. While he isn't sold on joystick controls, he has used laser-guided automated grade control systems on his graders for the past 15 years and finds great benefit with them.

"In some cases it slows you down a bit, but in the end you have a perfect job," he said.

Cormican has operated many different motor graders and has had his hand on all the technology currently out there. Yet, he said technology can't replace an experienced operator.

"The new technology makes it easier for the operator, by far," he said. "But it's very important that the operator know how to carry a load or get rid of a load correctly. All the automatic systems in the world will not replace seat time."

Over the years, Cormican has owned or driven every make of motor grader there is. His last six graders have been Volvos due to their simplicity and serviceability.

"Volvo motor graders have the best transmission and the best cooling system of any machine," he said. "The fuel consumption from what we have seen is about 30% less than any other brand of motor grader we have run."

When asked which grader he prefers, without hesitation Cormican names the Volvo G990. With an operating weight over 48,000 pounds, the G990 is the largest of the Volvo motor grader line, which Cormican likes.

"Volvo graders are built very strong, and everything is bigger on them," he said. "I wouldn't trade my G990 for any other product. They are unbelievable when you see them in the dirt working."

According to Cormican, Volvo graders have better turning capability with a two-degree sharper turn over other manufacturers. He also prefers the front-end ground clearance and the 31-inch moldboard on the G990s, which minimizes the spillage over the top of the moldboard.

Steve Laine, sales representative for Nuss Equipment of Duluth, Cormican's Volvo dealer, explains that the powertrain of the Volvo graders is designed for higher torque at lower engine speed, which delivers more usable power to the ground with lower fuel consumption. The planetary drive axle has outboard brakes that provide stopping power at the wheels instead of through the drivetrain. The coordination of the engine, transmission and drivetrain gives the motor grader the maximum power at the ground for the traction needed.

"It gets better fuel economy with the 11-speed transmission," Laine explains. "Dale can grade 8 to 11 mph. He also has more torque when he gets into the heavier pulls."

Laine also notes the turning capabilities on Volvo motor graders are better because of improved front wheel main systems. That, coupled with the articulation, gives the G990 tighter turns.

"That turning capability is a big plus when Dale is grading the roads during the sugar beet harvest," Laine said. "When he gets to the end of a row, he can turn right on the road top without having to go into the ditch, or having to be at a four-way intersection."

The difference is in the design of the circle drive, according to Gary Atkinson, product manager for motor graders, Volvo Construction Equipment. The circle drive system utilizes a dual pinion drive instead of a gearbox to turn the circle assembly and moldboard from one side of the motor grader to the other. "Direct-acting hydraulic cylinders act on two circle turn pinions, which turns the circle," he said.

Atkinson adds that the circle assembly is designed with the teeth on the outside for a better mechanical advantage and more circle-turn power. "It gives you more power under load," he said.

A skilled operator will change his moldboard discharge angle continually to maintain good rolling action of the material while maximizing his cutting width, Atkinson points out. The ability to do this under heavy loads is a big advantage over the competition.

Cormican also appreciates the attention Volvo pays to operator comfort. A fully air-conditioned cab plus optimal visibility provides a comfortable and safe environment for the operator.

"Volvo makes it convenient for the operator in every respect," he said. "The Volvo cab is a great place to work."

The most significant new development is the SwingBoom pivoting frame, which improves screed head maneuverability to reduce machine movements necessary to screed a given area
Ligchine
June 9, 2021
Follow Us