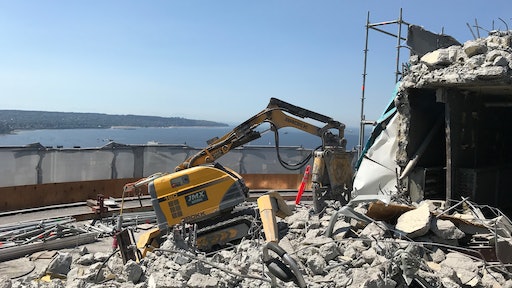 The implosion of the 332-foot-tall former headquarters of Bethlehem Steel took two weeks to prepare and a few seconds to bring down.
National Demolition Association

HRP Management is deeply rooted in the community of Bethlehem, PA. The developer had been watching the old Bethlehem Steel Headquarters site for years, so when it came on the market in 2006, HRP made the decision to take the 53-acre property with the intent of developing a large mixed-use facility. Over a four-year period, National Demolition Association (NDA) member CDI priced implosion of the 332-foot-tall structure on no less than five occasions to 11 different demolition and scrap companies. HRP eventually decided to perform the abatement itself, with crews ranging from 30-100 people, performing interior demolition and abatement of the tower and pre-demolition of related out-buildings over an 18-month period prior to CDI’s start of implosion preparations.

Imploding was the best choice

The prime factor driving a decision to implode the building was the height and structural configuration of the 644,000-square-foot main building. Each of the four wings was supported by two deep internal steel girders, which created a clear span that would have caused safety issues for a top-down piecemeal demolition or ground-based crane/high-reach excavator approach.

Although the developer priced conventional demolition using those methods, CDI’s implosion approach saved a significant amount of money in comparison. Additionally, the Martin Tower Complex was situated alongside several St. Luke’s University Hospital facilities as close as 115 feet away. The developer wanted to select a method that would mitigate impact of the demolition on its new neighbors. CDI’s implosion method provided that opportunity.

Although CDI quoted the project to many demolition and salvage companies over several years, the company was ultimately asked to provide a proposal directly to the developer, with CDI working in parallel to the developer’s interior strip-out and environmental remediation crews. CDI finalized the implosion design and structural modifications to prepare this complex steel-framed structure for implosion on an engineered basis.

CDI then provided the torchmen to perform specialty burning to prepare the structure for implosion, followed by explosives-handling operations, adjacent property inspections/vibration air overpressure monitoring and community outreach. CDI was chosen for its reputation, capabilities and capacity. CDI had the ability to do everything the developer was looking for on a turnkey basis to bring the structure to grade safely and successfully.

CDI first bid the implosion of Martin Tower in early 2015. The company was awarded a turnkey contract to prepare and fell the structure in April 2019, toward the end of the interior strip-out/environmental operation conducted by the developer/property owner.

It took CDI’s burners less than two weeks to perform precision burning in the structure for placement of explosives on five floors and additional structure pre-modification on an additional 11 floors toward creating well-broken debris. It took an eight-man CDI crew five days to load the structure and a matter of seconds to bring the building to grade on the Sunday morning of May 19, 2019, without any damages to adjacent improvements to remain or even a complaint from the sensitive medical complex adjacent to two sides of the Martin Tower site.

The interior strip-out was performed by the developer using skid steer loaders once environmental remediation was completed on a floor-by-floor basis. Walls on the lower two floors of the structure were removed with hydraulic excavators, reaching into the building without tracking onto the first floor slab above the basement below.

Given that Eighth Avenue was adjacent to the west face of Martin Tower, and in consideration of the structural configuration of the cross-shaped main building with its long beams spanning each of the four wings, CDI opted for a diagonal implosion pattern, which took the building down on an angle to the southeast.

CDI’s goal was to break up the debris to facilitate post-implosion removal by the developer’s selected contractor, and CDI was able to spread the debris adequately to the southeast so that the highest portion of the post-implosion debris pile from the 332-foot-tall tower building was only 26 feet above adjacent grade.

According to the developer, except for the deleterious material soft-stripped from the building, everything from concrete to non-ferrous metals and ferrous metals was going to be recycled as part of the green approach taken by the developer for the benefit of its neighbors in the Lehigh Valley. 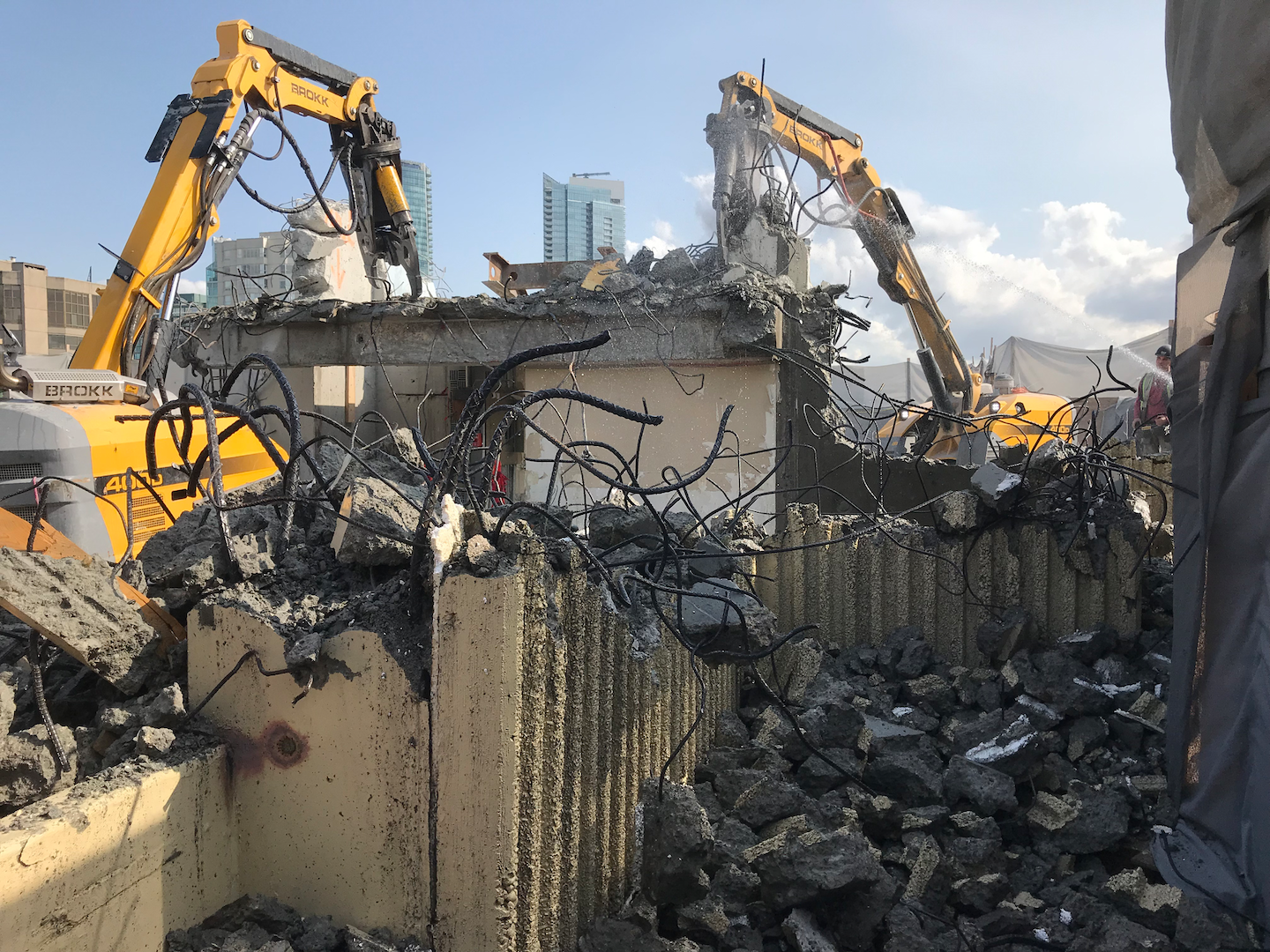 Because of the structural configuration of the building, with its cross-shaped long beams spanning each of the four wings, CDI opted for a diagonal implosion pattern, which took the building down on an angle to the southeast.National Demolition AssociationThe clear spans created by long beams in each of the four wings and steel column flanges up to 5.5 inches thick were the two structural challenges on the project. The close proximity of sensitive medical offices adjacent to the site, where such heavy steel had to be cut with shaped charges, also created a challenge, which CDI rose to and met.

CDI’s implosion delay plan kept peak air overpressure from the detonation of explosives to a minimum, well below limits allowed by the Pennsylvania Department of Environmental Protection. Not a window was broken, despite the size and number of shaped charges placed by CDI on five floors of the structure.

A total of 762 linear shaped charges were placed on steel columns in the structure with almost 10,000 lineal feet of detonating cord in the non-electric initiation system selected by CDI for the project.

The structure was safely prepared with no loss-time injuries. The project was carried out on schedule by CDI without any change orders to the client. The structure was brought down on the date specified by the client and coordinated with state and local regulatory agencies without damage.

Not a single third-party complaint was filed as a result of CDI’s operations. The debris pile was actually lower than projected to the developer by CDI during contract negotiations.

When things go as planned, safely, to the satisfaction of all parties involved and the client keeps his end of the bargain on the contractual relationship, CDI considers that to be a successful project.

Mark Loizeaux is the president of Controlled Demolition Inc. (CDI) in Phoenix, Maryland.