Demcon, an international member of the National Demolition Association, employed a 5-stage demolition process for a job that required imploding a 5-story building in the center of Athens, Greece 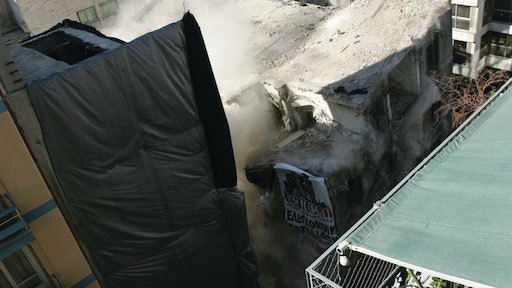 The atrium at the center of the building was used as the core of the collapse, and all the explosives were installed based on a design that would produce the fall of the structure towards the atrium.

Demcon, an international member of the National Demolition Association, took over the demolition project of a five-story building in Athens, Greece, which involved an implosion of the building.

Situated in a very confined space a few meters away from the central square named Sintagma Square in center city Athens, the five-story structure, erected in 1930, was adjacent to a hotel on one side and surrounded by flat buildings on the other. In addition, traffic traveled all day long on surrounding narrow roads.

Not only was the dilapidated building in a tight space, it was also unsightly. There were oxidized steel reinforcements and cracks on walls and central columns, mainly at the top two floors and on the floor of each level. It presented an image of a danger to public safety.

After the first stage of preparation work, the height of the building was reduced to approximately 49 feet (15 meters) by dismantling the top floor. Demcon employed a 5-stage demolition process for the implosion and demolition of the building.

The balconies were dismantled in order to optimize the final fall of the structure when the explosion was to be detonated. Several other modifications on the ground floor and basement were made to reduce the vibrations of the explosion.

Stage 3: Supply and installation of explosives

The atrium at the center of the building was used as the core of the collapse. All the explosives were installed based on a design that would produce the fall of the structure towards the atrium, beginning from the side of the streets closer to the atrium. The technique is directly related to the grid of columns and divided into three zones according to their distance from the center.

The time difference between the several explosions and the sequence of the falling sides was crucial during the implosion planning. Demcon installed pre-stressed steel cables to the walls in order to provide sufficient control of the collapse of the building. Also, the sides of the building on the surrounding streets were linked together among six points to the existing perimeter beams.

Next, holes were drilled on the chosen columns which were then wrapped with special geotextile and reinforced metal screen, filling capsules and networking. The method created a sequenced timing of the three zones of explosion.

The final phase of the implosion was activated by experienced personnel. The explosive materials on the columns of the first zone were triggered simultaneously, which was immediately followed by the next time step in .035 seconds. Each area dragged the appropriate section of beams and plates eventually creating the highest point of the heap in the existing internal atrium.

Demolition debris was moved by a fleet of heavy equipment, including excavators and Bobcat skid-steer loaders, onto trucks and other earthmoving vehicles. It was carted offsite to an approved recycling facility. Demcon's Demolition Waste Management Plan included the maximization, reuse and recycling of demolition materials; the minimization of waste disposal; and the implementation of a strategic waste management plan.

An industrial hygienist provided a final clearance report which included a report of waste disposal of all remaining debris.