How the Hinge Method for Controlled Demolition Works

The fastest technique used in demolishing chimneys is controlled demolition using explosives. This article takes a deeper look at a specific method of controlled collapse: the hinge method. 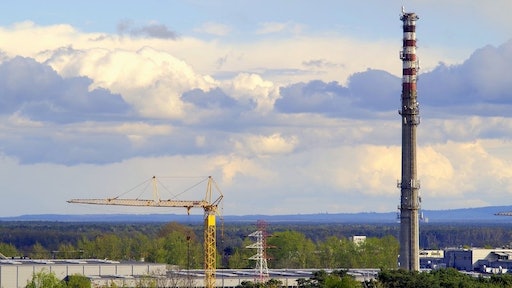 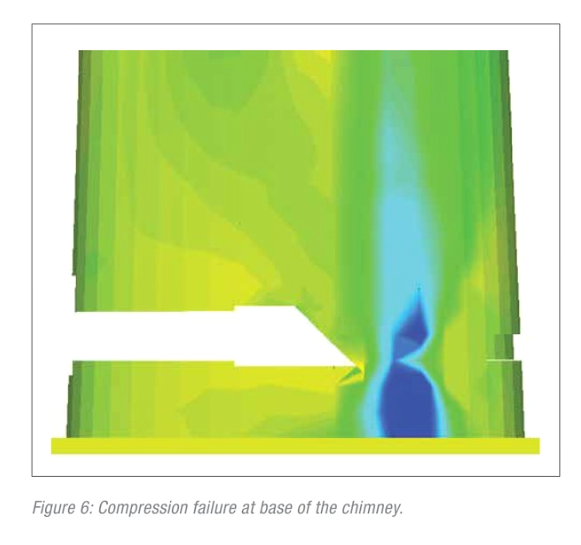 There are many challenges in the demolition process of tall chimneys and, in many cases, the added complexity of multiple chimneys inside each other. Tall chimneys are difficult/expensive to be demolished using long-reach excavators (mechanical demolition) unless a platform is installed on top of the chimney and a small excavator strips the chimney from top to bottom — a process that is usually used when there is a tight space around the chimney.

But the mechanical demolition of chimneys takes a relatively long time and, if not done properly, can be very dangerous. The fastest technique used in demolishing chimneys is controlled demolition using explosives. 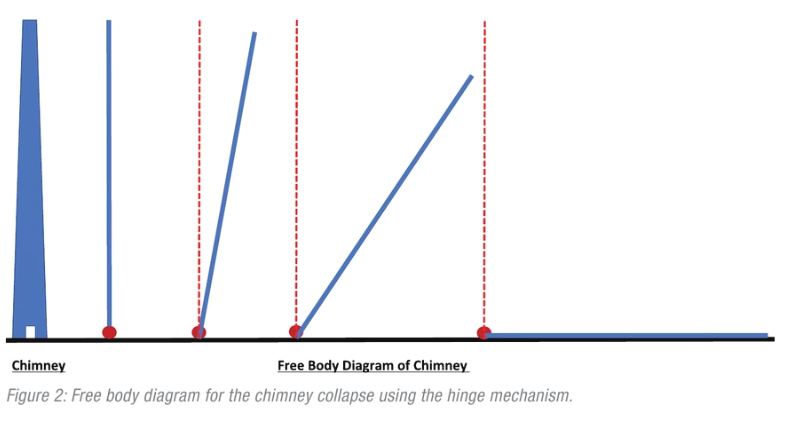 There are two common methods used for demolishing reinforced concrete chimneys using explosives (controlled collapse). The first method, the hinge method, involves weakening the bottom part of the chimney in a way such that the chimney falls in a certain direction. This method requires a lot of free space in the intended direction of the fall. The other method is the Telescopic Method, which involves weakening the chimney at a certain height above the base and then blasting the entire cross-section so that the chimney falls vertically onto itself without any tilting. This article will focus on the engineering analysis work needed for the hinge method.

In the hinge method, the chimney is weakened near the base in such a way that it rotates and collapses in the desired direction. Figure 2 shows a sketch for the desired collapse mechanism. To achieve such a collapse mechanism, the reinforced concrete chimney near the base is weakened so that the concrete and the steel reinforcement in front of the desired direction of fall is removed in certain locations and the reinforcement steel near the back is cut so that there is no tension resistance. Figure 3 shows a typical weakening technique for the chimney.

At the time of implosion, the red sectors are imploded and the chimney begins to tilt in the hinge opening direction. Since there is no reinforcement at the back of the chimney’s section, there is minimum resistance to the rotation (due to existing reinforcement bars at the uncut section) until the chimney hits the ground. It is important to note that no chimney is the same, and these examples involved advanced structural analysis to ensure the weakening and implosion designs resulted in a safe and desired outcome.

Structural analysis helps demolition contractors ensure the safety and efficiency of the demolition. The structural engineer should build a 3D model using software that has the ability to track the geometric changes and nonlinear behavior of different materials inside the building when subjected to the demolition process. For example, the software must be able to track the cracking behavior of concrete, the yielding and the rupture of reinforcement bars, and the collision of debris. These types of software can predict the actual behavior during collapse, estimate the speed of the collapse as well as the impact force with the ground, and even provide an estimated debris field.

For illustration purposes, a 3D, nonlinear dynamic structural analysis model was created for a chimney 680 feet high with a diameter of 45 feet at the base. The model is created using Extreme Loading ® for Structures (ELS) software. The concrete thickness at the bottom is 25 inches. Figure 4 shows the ELS model for the chimney with the weakening implemented inside the model. Figure 5 shows the collapse sequence of the chimney.

As soon as the concrete section was imploded, the chimney began to tilt in the direction of the open mouth of the hinge. At four seconds, a compression failure occurs at the base, as shown in Figure 6. The chimney then continues its collapse until 14 seconds, where cracking and reinforcement steel rupture occurs, causing the top part to separate and fall away from the chimney. This kind of separation happens due to the centrifugal force acting on the section. 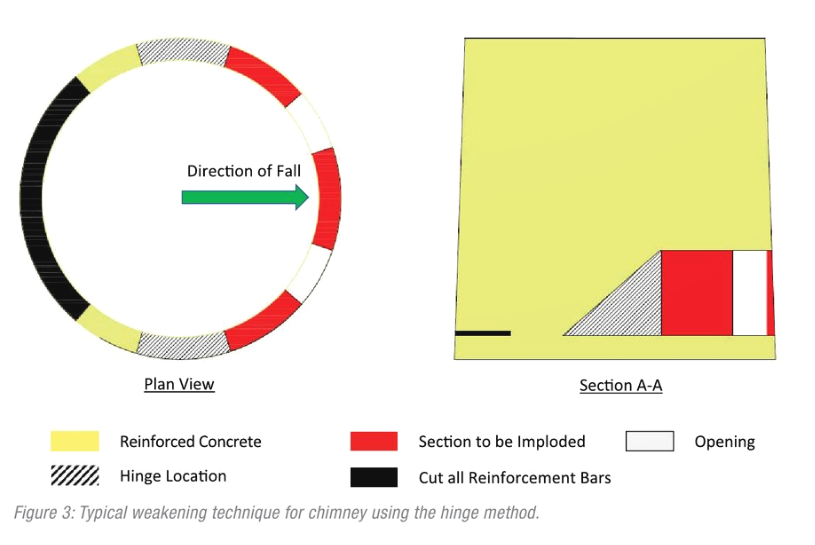 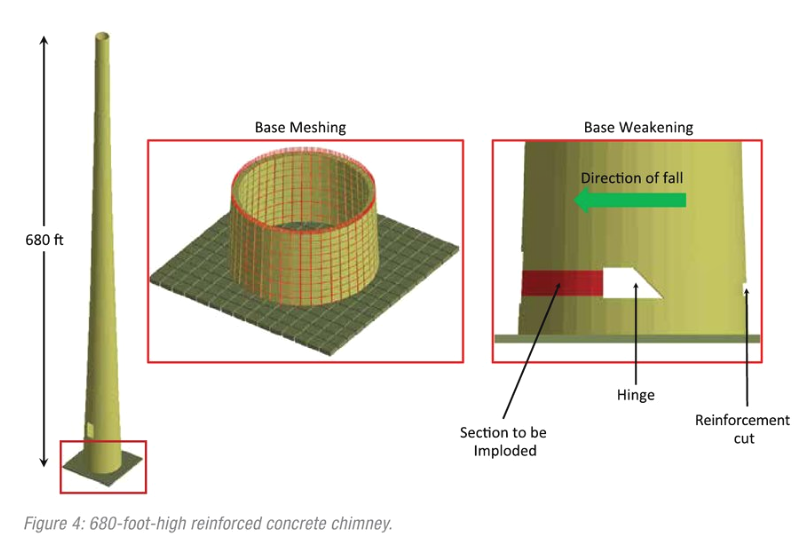 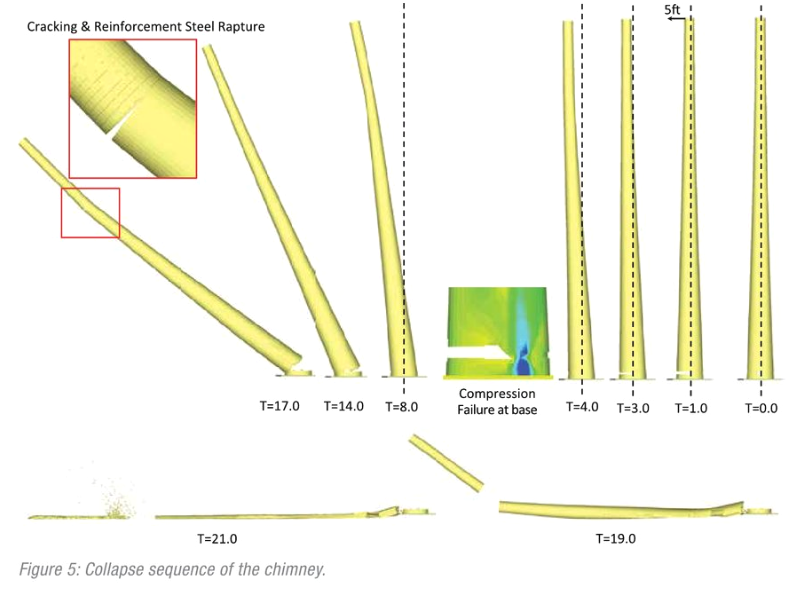 Based on the results of the 3D structural analysis, structural engineers determine the length, location and height of the hinge. There are many factors affecting the dimensions of the hinge that may impact the outcome of the demolition. For example, if the length is too short, the chimney might not tilt; hence, the chimney will not collapse as planned. On the other side, if the hinge length is too long, then the pivot might crush early, causing the chimney to fall vertically or in an undesired direction.

Another factor that affects the hinge dimension is the compressive strength of concrete. If the concrete is not strong enough, it might crush early, causing a compression failure. In this scenario, an uncontrolled collapse might occur, where the chimney falls vertically or in an undesired direction. Sometimes structural engineers allow compression failures to occur. However, it must occur after the chimney has begun tilting in the desired direction.

The height of the hinge is also critical. If the height is too short, then the mouth of the hinge will close early, preventing the tilting of the chimney. All these factors can be included in the 3D structural analysis model to assure the demolition contractor and all stakeholders that the demolition plan will work safely and as intended. In the past, many demolition disasters occurred due to neglecting structural analysis or the use of inefficient engineering tools or inexperienced engineers in demolition planning of chimneys and many other complex structures like stadiums, bridges and high-rise buildings.

Figure 7 shows a demolition sequence for the same chimney assuming weak compressive strength for the concrete. The figure shows that as soon as the implosion occurs, the hinge at the base experiences a compression failure, leading to the locking of the hinge (as shown in Figure 8), and the chimney begins to vibrate back and forth instead of tilting in the desired collapse direction. Figure 9 shows the chimney’s top displacement history.

The chimney tilted 2.5 degrees in the X direction. The period of vibration from the figure is 10 seconds, which shows that this chimney is unstable and is not safe. If this were to happen in reality, it would cause significant delays to the demolition schedule and, more importantly, the impact on the safety of demolition workers and demolition equipment existing at the demolition site. 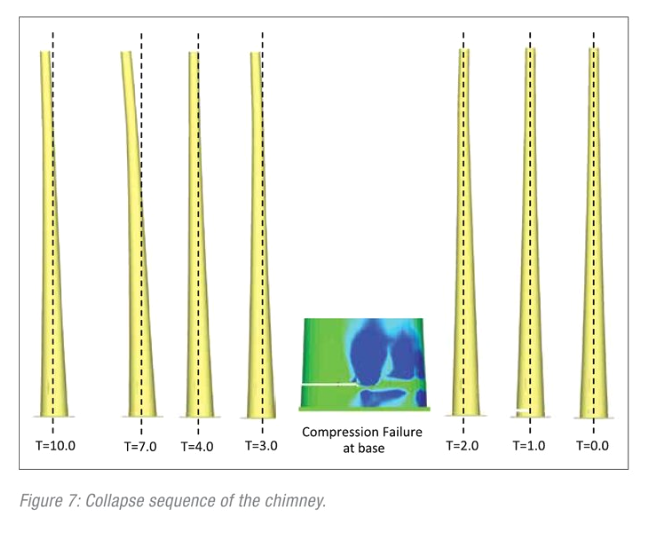 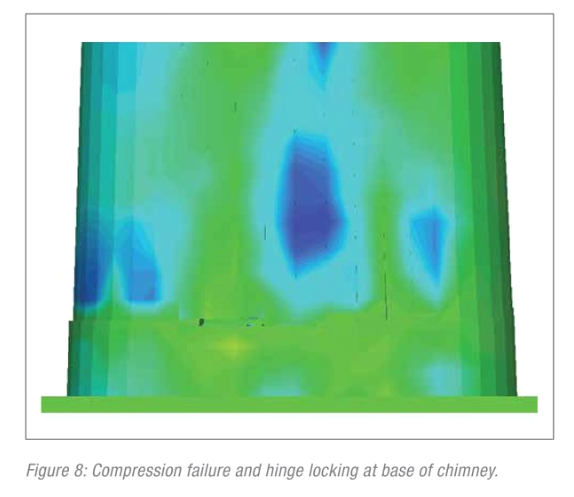 Figure 8: Compression failure and hinge locking at base of chimney.National Demolition Association 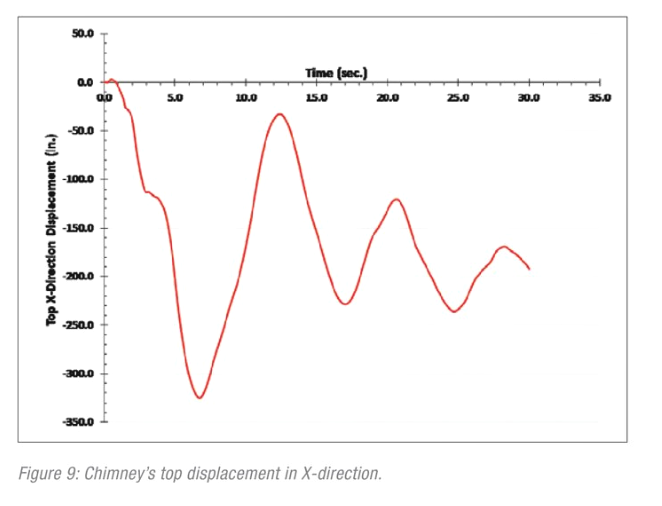 Structural analysis is very important for the safe and efficient demolition planning of tall chimneys. Structural engineers must use 3D dynamic analysis software that can perform fully nonlinear structural analysis to be able to track the behavior of different materials inside the chimneys properly. Failure to use such tools might leads to accidents, disasters, unsafe conditions and unnecessary delays.

Ayman Elfouly, P.E, M.ASCE, is a senior structural engineer at Applied Science International LLC. As a professional engineer licensed in North Carolina and an active member in the American Society of Civil Engineers, he was able to work with demolition contractors worldwide to achieve safety by doing structural analysis for buildings during demolition. He can be reached at elfouly@appliedscienceint.com.