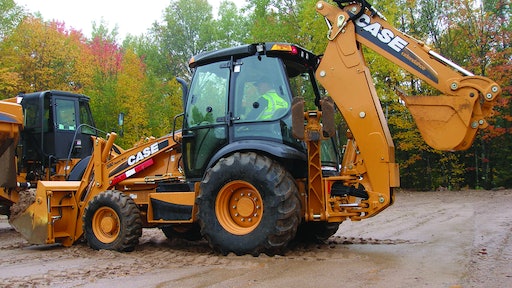 In redesigning its 57-year-old backhoe-loader line, Case retained such legacy features as the over-center boom, Pro Control for taking the slop out of boom swing, open-center backhoe hydraulic control and ground-level servicing. But eliminating a model to pare the line down to four machines was hardly the most dramatic change to the Case lineup.

Significantly refitted hydraulic systems back up the company’s claims that the N Series is “Stronger Everywhere,” and the specifications show dramatic increases in backhoe breakout force and lift, as well as loader breakout force, lift and reach.

A lift in hydraulic performance

Case boosted hydraulic performance by increasing cylinder sizes in several positions, and by turning up pump pressure to around 3,400 psi and flow to 43 gpm across the line. The Super Ns all use variable piston pumps.

Engineers borrowed a trick from the excavator playbook, designing a new Power Lift mode into the hydraulics. Like the heavy-lift mode on some excavators, Power Lift boosts hydraulic pressure (to about 3,700 psi) and cuts engine speed in half to give the backhoe extra muscle with increased control in heavy lifting and hard digging conditions. Throwing the Power Lift rocker switch on the dashboard provides a 6% increase in the 590 Super N’s boom lift capacity, 8% on the 580 Super N and 16% on the Super N WT.

Case had customer input throughout the 18-month design process on the N Series, and placed pre-production units on several customer sites. Dennis Zentner, owner of DRZ Contracting, in Delta, British Columbia, found that the 580 Super N WT could eliminate the need for an excavator on many common projects.

“On jobs where we’re installing a big septic system, we used to have to bring in our 120- or 160-sized excavator just to lift the box,” Zentner says. “The Power Lift ability will save me from using that excavator.”

Boom gets a makeover

The fabricated boom allows for internal hose routings for improved protection. Reducing the loops of hose at the boom-stick connection also allows for lower transport heights.

The new bucket-linkage design achieves 198° of rotation and maximum breakout force without requiring a change in pin positions. Bucket pin size was increased to handle the increased forces generated by Power Lift.

The over-center backhoe boom still shifts backhoe weight forward toward the tractor’s center of gravity for reduced porpoising going down the road. The straight boom produces nearly peak boom lift capacity through most of the lift range.

In an era in which vehicle manufacturers are reducing expensive inventory options such as transmissions, Case has added a transmission choice. Bridging the price gap between the power shuttle and a new hydraulic powershift transmission (Powershift-H Type) is the all-new Powershift-S Type. The synchronizer-shifted powershift moves an automated transmission to a lower price point in the line. (At $1,850 over list price, it’s right at half the cost of the Powershift-H.)

Like most synchronizer-based powershifts, the S transmission passes through neutral with each shift. The H powershift does not. Buyers willing to pay a little more for the fastest shifts with no interruption in power can still select the Powershift-H.

The powershift transmissions come with a standard kick-down feature. A switch on the dashboard allows the operator to choose from the new Smart Clutch’s three settings to vary the speed and aggression of clutch engagement when shuttling from forward to reverse.

Loader arms have been extended to deliver more forward reach and higher bucket-clearance heights. With the reverse-parallel loader linkage, the loader arm stops the bucket dump movement rather than the bucket cylinders, minimizing the potential for damage when operators rap the bucket into the stops to clear it of sticky material.

Case also revamped its lighting system, increasing performance 28% with overlapping field coverage. Adjustable side lights added to the cab create a 360° island of work light around the machines.