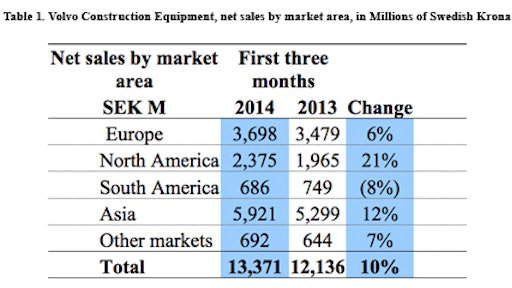 The first three months of 2014 saw improved earnings on the back of higher sales at Volvo Construction Equipment (Volvo CE). With deliveries up and a new range of Tier 4 Final/Stage IV-compliant models launched, the company saw most growth in mature markets.

Volvo CE experienced growth in sales, earnings, deliveries and order intake during the first quarter of 2014. Much of the improvement during the period came from higher sales of smaller machines, while larger machine sales remained relatively subdued. The biggest sales increases came from more mature markets, particularly North America, where sales were up 21% during the period, compared to the same three months in 2013.

These results come amid a gradual improvement in the market situation. Measured in units, Europe grew by 15% during the first two months of 2014, while North America was up by 7% despite a harsh winter. South America saw demand fall, caused mainly by Brazil, where most of the large government-funded projects have been delivered, as well as reduced demand for commodities. The total Asian market, excluding China, strengthened by 4% compared to 2013, thanks largely to a 38% improvement in Japan. This was offset somewhat by further declines in India and South East Asia. Compared to the low levels seen in 2013, China saw growth in the first two months of the year; its loader and excavator segment increased by 7% and there was a continued shift towards compact equipment.

Prospects for the rest of the year remain modest. Measured in units, Europe and North America are both expected to grow by 0-10%, while South America and Asia (excluding China) are forecast to decline by up to 10%. China, meanwhile, is expected to develop in the region of -5% to +5% during 2014.

“The seasonally strong first quarter had a positive impact on volumes, which contributed to improved profitability compared with the weak close of 2013,” commented Volvo CE’s president Martin Weissburg. “The situation continues to be challenging, particularly for customers and dealers with large exposures to the mining industry. That said, we expect a moderate growth in Volvo CE’s mature markets.”

Volvo Construction Equipment Rounds off 2013 with Sales Up 3%

Proterra will provide its battery technology for use in a proof-of-concept battery-electric hydraulic excavator Komatsu plans to bring to market by 2023.
Sara Jensen
January 27, 2021
Follow Us