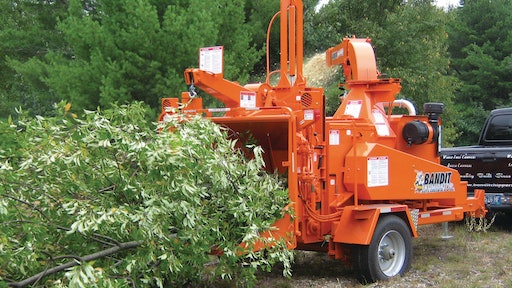 Bandit now offers its 18-in. capacity hydraulic-feed drum-style Model 1890XP brush chipper as a single-axle unit with a 180-hp engine. This engine was previously only available on the Model 1890HD (heavy-duty), whose dual axles and heavier frame often put the machine over the mandatory 10,000-lb. weight restrictions for local infrastructure. The Model 1890XP with 180-hp engine, nicknamed "The Brute," offers the same 18-in. chipper capacity on a single 12,000-lb. axle. Fully loaded, the unit weighs approximately 9,600 lbs. and is 94 in. wide. Like all Bandit hydraulic-feed drum chippes, the 1890XP also features the patented "power slot," which is cut into the belly of the chipper. This allows for proper flow of air through the discharge and provides a slot for chips that might remain in the housing to escape, making the chipper virtually impossible to plug.

The Model 1890XP ("The Brute") 18-in.-capacity, hydraulic-feed, drum-style brush chipper is now available as a single-axle unit with a 180-hp engine.