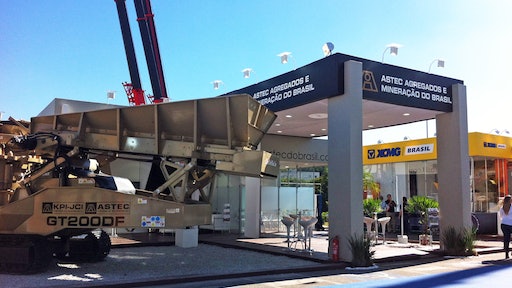 KPI-JCI & Astec Mobile Screens recently participated in the M&T Expo in São Paulo, Brazil, as part of a newly-established joint venture called Astec Agregados E Mineracao do Brasil between its parent corporation, Astec Industries, Inc. and MDE, a KPI-JCI & Astec Mobile Screens authorized dealership in Brazil.
During the show, KPI-JCI & Astec Mobile Screens showcased its GT200DF, a track-mounted cone plant that combines a high-performing cone crusher design with extreme mobility and durability. The company exhibited in the Astec Agregados E Mineracao do Brasil’s stand along with its sister Astec companies.
The 2012 M&T Expo is the most important tradeshow for machinery and equipment in Latin America.
Dave McCracken, KPI-JCI & Astec Mobile Screens’ international sales director for Latin America, said the show proved successful for both KPI-JCI and for the entire Astec Aggregate & Mining Group.
“There was very good interest in our KPI-JCI & Astec Mobile Screens track-mounted plants, especially the GT200DF, which we exhibited at the show,” McCracken said. “We expect to increase our business in Brazil in the next six to 12 months because of our participation in this Brazilian construction show.”
The company chose to feature the GT200DF because of the rising demand for track-mounted cones in Latin America, McCracken said.
“I’ve been working in the South American markets for four years now, and we believe that our best opportunities for growth will be in Brazil, Chile and Colombia,” he said. “The high growth in the construction market, particularly in Brazil, has resulted in a real need for track-mounted crushing plants. In the past, we have been very strong with our mobile equipment in new highway construction projects in Colombia, and we hope to be able to meet the needs of contractors in South America.”
McCracken attended the M&T Expo along with Mike Johnson, vice president of sales and marketing for KPI-JCI and Astec Mobile Screens; Ron Griess, product manager at Kolberg-Pioneer, Inc. (KPI-JCI); and Michael Fisk, international sales coordinator at Johnson Crushers International, Inc. (KPI-JCI).
CLick here for more information about KPI-JCI and Astec Mobile Screens. Click here to learn more about the Global Track series.

The two-day class includes a manufacturing facility tour, equipment operation best practice training, a hands-on demonstration and plenty of networking opportunities allowing machine owners to learn from each other as well.
Rotochopper Inc.
March 18, 2020
Follow Us