Travis Lienemann of MFT Construction heads for Texas for a three-day hunt on the Y.O. Ranch and to celebrate Nugent's birthday

Norcross, Ga. (April 20, 2011) -- It's a hunter's dream come true: a 3-day hunting trip for you and a buddy at the famed Y.O. Ranch in Mountain Home, Texas – with Ted Nugent as your hunting host. That was the grand prize offered in Leica Geosystems' "Go Hunting with Ted Nugent" Sweepstakes, a promotion specially designed for CONEXPO 2011 attendees.

The lucky winner of the sweepstakes is Travis Lienemann of MFT Construction, a utility and paving operation serving both Iowa and Nebraska. He says, "I am thrilled to be the winner of the Leica Geosystems sweepstakes. Now, all I have to do is decide which buddy to take on the hunting trip with Ted Nugent, whom I will be thrilled to meet and hunt with."

"Congratulations to Travis. This sweepstakes was a major hit at CONEXPO," says Mike Reed, Machine Control Business Manager, Leica Geosystems. "I thank our team for coming up with this unique, fun idea and also everyone who enjoyed participating in such an opportunity. The sweepstakes spread like wild fire and you could hear people talking about it in all the corners of the convention center.

The Grand Prize won by Travis consists of a hunting package for two people at Ted Nugent's private birthday celebration at Y.O.Ranch in Mountain Home, Texas. The hunting package includes three days of hunting, meals, accommodations, and guide. Animals in the package are either a management white tail or management sika buck. Travis has his choice of either bow or gun hunting with this package.

In addition to hunting at the nation's premier game preserve, Travis and a friend will get to share meals and spend personal time with Ted Nugent during this private birthday celebration.

With 40,000 acres of rugged hill country terrain, the Y.O. Ranch has been described as "a trophy hunter's paradise." It is home to trophy native game as well as 60 species of exotic game from around the world.

The hunting trip will take place in December 2011 in conjunction with Ted Nugent's private birthday celebration. Mr. Nugent, an avid hunter and lifelong outdoorsman, has been inducted into the National Bowhunters Hall of Fame and named Favorite Hunting Personality by the readers of Outdoors Magazine. 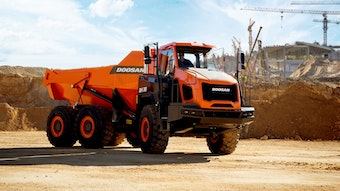 We understand the challenges of your jobsite. Our ADTs are designed with you in mind
December 1, 2020
Latest

We understand the challenges of your jobsite. Our ADTs are designed with you in mind
December 1, 2020

JCB updated the 19C-1E E-TECH cab with new features, which include a fully glazed cab and an electric heater. These features allow a full day’s shift to be worked in a dry and comfortable operating environment.
JCB
November 18, 2020
Follow Us