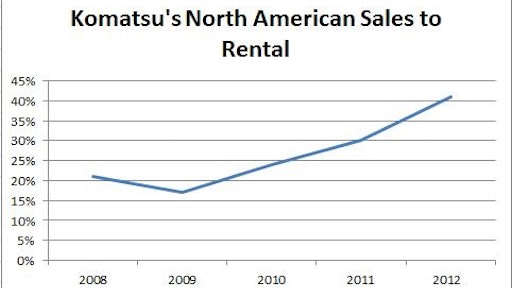 The portion of Komatsu's North American sales that went to rental fleets grew by 73% in the six months ended in September 2012.

Recent sales numbers released by Komatsu reveal a dramatic shift in North American sales to the rental segment. According to their data, sales to rentals grew at a 73% year-over-year rate in the six months leading up to September 2012 -- a huge increase from the year-earlier rate of 41%.

We have contended for some time that North American equipment users will choose to rent machines versus purchasing them.

Coincidentally, we’ve discovered through some recent surveys that equipment users are also renting in order to delay purchasing machines equipped with Tier 4 Interim engines. They indicated they would rather wait for Tier 4 Final machines to be introduced.