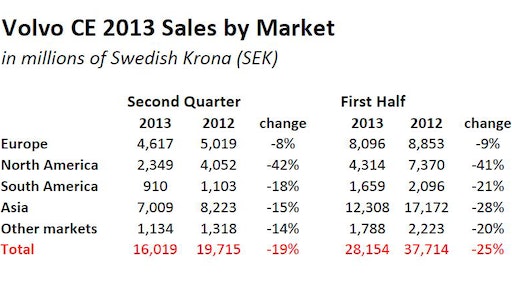 Volvo Construction Equipment's sales in the second quarter of 2013 were down 19 percent. Despite lower sales, the company's cost and inventory control measures allowed operating margin to more than double, compared to the first quarter of 2013.

Underlying positives include good order intake and improving trends in China, Europe and the Middle East. And

Unit sales for the full year 2013 in Europe are anticipated to decline 5 to 15 percent, while expectations regarding North America, South America, China and the rest of Asia are all expected to be in the range of minus 5 to plus 5 percent.