David Mahaffey, Buffalo, Oklahoma, is the grand prize winner in the Win Your Attachment in 2010 contest. 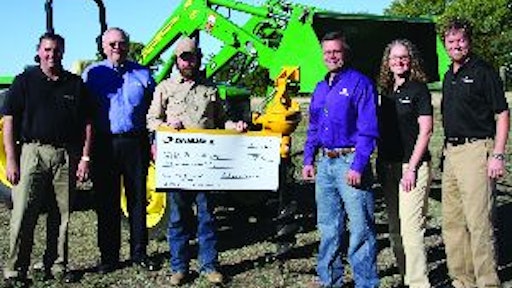 On October 8, 2010, Danuser Machine Company marked its 100-year anniversary with an Open House at their location in Fulton, Missouri. During the celebration, fourth-generation family owner siblings Glenn and Janea Danuser drew a grand prize winner for the Win Your Attachment in 2010 contest. Contest rules stated the customer must purchase a serial-numbered Danuser Attachment between January 1, 2010 and October 1, 2010, and return the warranty registration.

The Danuser name is known in agricultural and industrial markets for manufacturing high-quality PTO and hydraulic diggers and augers, post drivers, and pallet forks. Danuser also distributes the Postmaster/Slab Blaster and Auger Bucket. As an Original Equipment Manufacturer (OEM), Danuser supplies ball joints, rod and bar ends, linkages, Klik Pins, and a variety of other parts and assemblies for manufacturers in the ag, turf care, construction, and fluid power industries. Visit www.danuser.com to learn more about Danuser products.