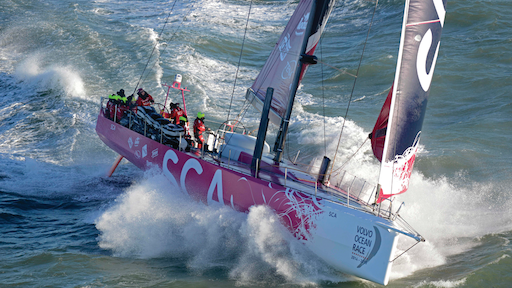 The Volvo Ocean Race is considered the toughest, most treacherous race in the sport of yachting.

It’s been 40 years since 17 yachts set off from Portsmouth, England, circled the globe, and arrived back into port seven months later. The Whitbread Round the World Race, as it was called then (Volvo took over ownership of the race for the 2001-02 edition), was the toughest, most treacherous race the sport of yachting had ever seen. And today, after a total of 11 round-the-world races, it still is.

“The Volvo Ocean Race is an event we really look forward to every three years,” says Elin Svanström, Volvo Construction Equipment’s (Volvo CE) sponsorship and event project manager. “Not only is it a thrilling sporting event to witness, but it also gives us an opportunity to engage with our customers because of its strong connections to our brand values — including endurance, teamwork and passion for performance.”

The Volvo Ocean Race has changed a lot since 1973 — and it will continue to change before the 2014-15 race even begins. For one thing, the Volvo Open 70 yachts, which have been used in every competition since 2005, are hanging up their sails. Next year, all teams will use the new one-design Volvo Ocean 65.

The use of one standardized yacht design will have several big benefits. For one thing, it will make participating in the race much less expensive for the teams, who no longer have to employ a crew of designers to create their boats. For another, it will make the boats safer, with designer Farr Yacht Design ensuring that safety measures are a top priority. And a standardized design will put the teams on an even playing field, making the race more competitive than ever.

“Now it’s entirely up to the sailors — not the boat designers — to determine who’s the best,” Svanström says.

Closer to the action

For the 2014-15 race, online content will play a more prominent role than ever before, and social media will be even more key in getting the race in front of a world audience.

“The next race will be about giving as many people as possible the most up-close-and-personal access to the race,” Svanström says. “As in the past, we’ll have reporters on board every yacht, and we’ll be broadcasting more interviews and footage online – both during the race and during the run-up.”

Visitors to volvooceanrace.com can now view videos of the boats being constructed and the teams practicing. So far, three teams have signed up for the challenge — including an all-female team from Sweden — and organizers are hoping to increase the size of the fleet from the six boats that took the start line in the last edition.

There’s still 18 months to go until the Volvo Ocean 65s depart Alicante, sail around the world for nine months — all the while battling harsh conditions and churning seas — and finish in Gothenburg, Sweden. But already, excitement is building, both for fans and for Volvo CE.

“We’re excited to be celebrating 40 years of racing around the world, and we can’t wait to embark on another adventure,” Svanström says.

In-Port Race: to be decided

Leg Start: to be decided

Survey shows construction activity is returning to pre-coronavirus levels in many parts of the country and some firms are beginning to add workers
Associated General Contractors of America
June 19, 2020
Follow Us