For the first time in 20 years, US infrastructure is out of the American Society of Civil Engineers' D range overall, but 11 of 17 categories of assets got individual D grades characterized by significant deterioration with a strong risk of failure. 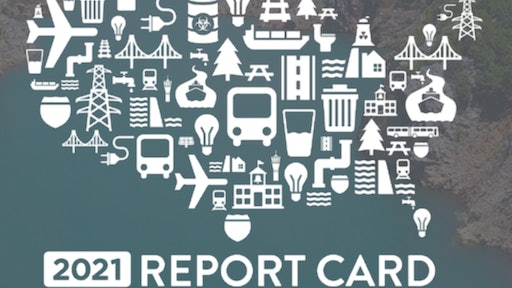 Of the 17 categories making up the overall grade, 11 were in the D range that indicated a “significant deterioration” with a “strong risk of failure.” They included public transit, storm water infrastructure, airports and roads and highways, which make up the biggest chunk of U.S. infrastructure spending at $1.6 trillion, according to the group.

"America’s infrastructure is not functioning as it should, and families are losing thousands of dollars a year in disposable income as a result of cities having to fix potholes, people getting stuck in traffic or due to repairs when a water line breaks or the energy grid goes down,” said Greg DiLoreto, one of the group’s past presidents. “It’s critical we take action now,” he said, expressing optimism that the federal government is now making it a “top priority.”

In the report, the ASCE called for “big and bold” relief, estimating it would cost $5.9 trillion over the next decade to bring roads, bridges and airports to a safe and sustainable level. That's about $2.6 trillion more than what government and the private sector already spend.

President Joe Biden’s administration and lawmakers in recent weeks have begun laying the groundwork for a long-sought boost to the nation’s roads, bridges and other infrastructure of $2 trillion or more, to be unveiled after Congress approves legislation on COVID-19 relief. Transportation Secretary Pete Buttigieg, who has been meeting with lawmakers about the effort, has said the aim would be to rejuvenate the post-coronavirus pandemic economy and boost crumbling roads and bridges while encouraging alternative forms of transportation to cars, as well as create thousands of green jobs by making environmentally friendly retrofits and public works improvements.

“This report card is a warning and a call to action,” Buttigieg told The Associated Press. “A generation of disinvestment is catching up to us, and we must choose whether to allow our global competitors to pull ahead permanently, or to invest in the safety, equity, resilience and economic strength that superior infrastructure can bring to Americans.”

America’s roads are critical for moving an ever-increasing number of people and goods. However, these vital lifelines are frequently underfunded, and 43% of the system is now in poor or mediocre condition. As the backlog of rehabilitation needs grows, motorists are forced to pay over $1,000 every year in wasted time and fuel. Overall, our deteriorating roads are forcing the nation’s motorists to spend nearly $130 billion each year in extra vehicle repairs and operating costs. Even more troubling is that the number of vehicle miles traveled on roads in “poor” condition has risen from 15% to more than 17% over the last decade.

The U.S. has been underfunding its roadway maintenance for years, which the ASCE says has resulted in a $786 billion backlog of road and bridge capital needs. The bulk of the backlog ($435 billion) is in repairing existing roads, while $125 billion is needed for bridge repair, $120 billion for targeted system expansion, and $105 billion for targeted system enhancement (which includes safety enhancements, operational improvements and environmental projects).

The tax of 18.4 cents per gallon for gasoline and 24.4 cents for diesel has not been raised since 1993, and inflation has cut its purchasing power by 40%. Additionally, new vehicle fuel economy for passenger vehicles has increased by 11 miles per gallon between 1993 and 2017, further reducing revenue. The Congressional Budget Office estimates that by 2022 the Highway Trust Fund is projected to have a $15 billion deficit as current spending levels exceed revenues from user fees that supply the fund.

To raise the grade for roads, the ASCE offers these five tips: