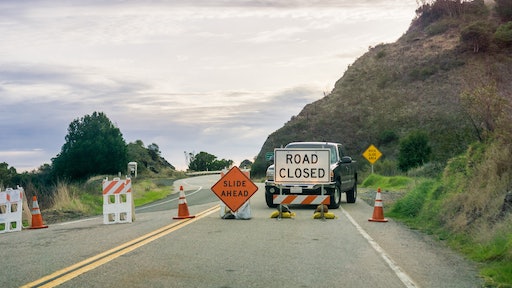 California’s Highway 1 was ruptured by a landslide earlier this year. It kept 23 miles of the iconic road closed for months.
Adobe Stock/Sundry Photography

Climate change has been a buzz word since President Joe Biden took office in January. According to the National Climate Assessment,  climate changes threaten the U.S. transportation system and this will have an impact on roads, ports and more.

The U.S. General Accounting Office (GAO) has issued a “Disaster Resilience Framework” which will serve as a guide for analysis of federal actions to facilitate and promote resilience to natural disasters and changes in the climate across many policy areas, including transportation. The GAO says this information can help agencies address the effects of climate change, including the financial risks. It also discusses using incentives to encourage private companies to start risk reduction projects

GAO noted that the U.S. Global Change Research Program issued a report in 2008 that indicate a “changing climate” threatens the performance of the U.S. transportation system across all modes, including roads. As a result, Congress authorized approximately $43 billion of fiscal year 2021 formula funding for FHWA’s federal-aid highway program, which primarily funds highway planning and construction.

GAO said it expects to issue a full report on the results of its ongoing “disaster resilience” research later this summer.

The framework comes as President Biden has made it a priority to not just modernize U.S. infrastructure, but to build it back better in a more resilient manner.

"We’ve seen the need for a more resilient economy for the long-term, and that means investing in a modern, sustainable infrastructure and sustainable engines of growth —  from roads and bridges, to energy grids and schools, to universal broadband," he said.

Biden and Congressional leaders have been unable to come to an agreement on how to pay for his plan. Last week, the Biden administration has lowered its spending proposal on its infrastructure and jobs proposal, from more than $2 trillion to $1.7 trillion.

The latest figure is still more than $1 trillion higher than the offer Senator Shelley Moore Capito (R-WV) and other Republicans had initially made to the White House. In fact, the $550 billion the White House has dropped from its original plan almost totals the $568 billion proposal Capito had presented to Biden last month.

"We want to get it as right has we possibly can,"  Capito said during the 2021 Transportation Construction Coalition (TCC) Fly-In. "We want to make sure the plan has the right focus and the right physical framework. Solid core infrastructure should be included in this plan. That includes road and bridges, wastewater, transit, rail, airports and broadband."

Infrastructure talks between the Biden administration and this key group of GOP senators seem to be bogging down over big differences between the scope of the bill, the price tag and how to pay for it.

Time is quickly running out to strike a bipartisan deal. Democrats and the White House have pointed to the end of May as the timeline for Republicans signaling whether they will get on board.

Stay tuned to ForConstructionPros.com/Infrastructure for the latest news from Washington.

The $6.2 million expansion will allow for relocation of Carlson Paving equipment from Tacoma, WA to the Tennessee location
May 17, 2021
Follow Us