White House confirms the president will sign a spending bill that doesn’t fund a border wall, and declare an emergency to take construct funds without Congressional approval 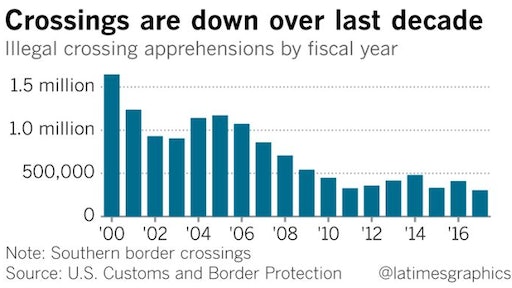 An LA Times graphic of apprehensions of people attempting illegal crossings of the southern US border since 2000 shows significant decline, raising the possibility that courts will question the president's declaration of national emergency.

President Trump plans to declare a national emergency so he can bypass Congress and build his long-promised wall along the southern border even as he signs a spending bill that does not fund it, the White House said Thursday.

The New York Times reports that the announcement of Trump's decision came minutes before the Senate voted 82-16 to advance a federal spending package in anticipation of final passage on Thursday night by the House.

In the context of his declaration of a national emergency, Trump would seek to access funds for the wall that Congress had not authorized for that purpose. Legal experts have said the president has a plausible case for taking such action under current law, but it would almost surely prompt a court challenge.

Declaring a national emergency would disregard the objections of Senate Majority leader Mitch McConnell and other Republicans who balked at what they deemed presidential overreach. Conservative lawmakers and commentators said that such a move would set a precedent for a liberal president to claim the same power to act on issues like climate change or gun control without congressional consent.

USA Today says litigation could go all the way to the Supreme Court, which has recently smacked down attempts by both Trump and President Barack Obama to make end runs around Congress. How long that takes would depend on several factors:

Litigation may turn in part on whether Trump erred in declaring an emergency in the first place. Though the president has described the situation on the border as a "security and humanitarian crisis," the number of people apprehended attempting to cross the border illegally has trended down steeply over the past decade.

Courts have traditionally given presidents leeway to decide matters of national security.

"There’s just not a lot of guidance in these statutes about what actually constitutes a national emergency," said Margaret Taylor, senior editor and counsel at the legal blog Lawfare and a former Democratic aide on the Senate Foreign Relations Committee. "Congress and the courts have been deferential to presidents on that decision."