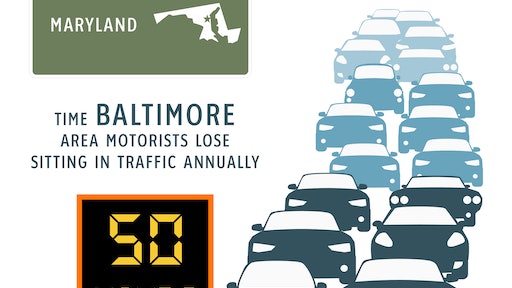 Maryland’s quality of life and economic development is being hampered by high levels of traffic congestion and reduced accessibility. However, it is benefitting from a statewide program to improve accessibility, and Governor Hogan has proposed a comprehensive set of transportation improvements designed to improve mobility, according to a new report released today by TRIP, a Washington, DC based national transportation research nonprofit.

According to the TRIP report, “Keeping Maryland Mobile: Accomplishments and Challenges in Improving Accessibility in Maryland to Support Quality of Life and a Strong Economy,” the state’s roads carry the highest traffic volume in the nation and commute lengths are the second longest in the U.S. Traffic congestion costs the state’s residents and businesses billions of dollars each year and severely constrains the number of jobs accessible to residents.

Freight shipments in Maryland, which are primarily carried by trucks, are expected to increase significantly through 2040 due to population and economic growth, and changes in business, retail and consumer models, which rely on a faster and more responsive supply chain. The efficiency of freight movement in Maryland is threatened by traffic congestion, which reduces the reliability of goods movement to and from destinations in the state and through the state.

The chart below ranks the five highway segments in Maryland that provide the worst travel reliability for commercial trucks as a result of traffic congestion. A full list is included in the report.

MDOT SHA congestion relief programs – which include an incident management program, additional park and ride spaces, HOV lanes, new sidewalks and bike lanes, and improvements to at-grade rail crossings and major intersections – were estimated in 2016 to save approximately $1.6 billion in reduced delays, fuel consumption and emissions. In addition to the efforts already underway, Governor Hogan has recommended a $17.8 billion multimodal congestion relief plan that includes the following:

“It is critical that Maryland have a robust transportation plan capable of improving mobility and accessibility, which is vital to the state’s economic health and quality of life,” said Will Wilkins, TRIP’s executive director. “While recent state efforts to ease congestion and improve the reliability of Maryland’s transportation system have been helpful, more work still needs to be done. Congress can help by fixing the federal Highway Trust Fund and passing major infrastructure legislation.”