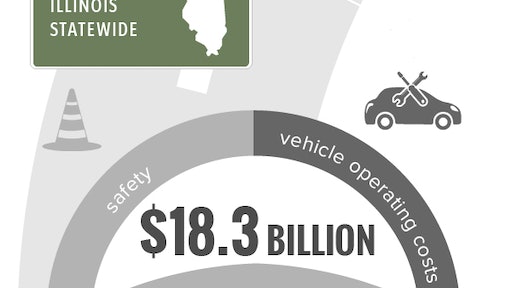 Roads and bridges that are deteriorated, congested or lack some desirable safety features cost Illinois motorists a total of $18.3 billion statewide annually – as much as $2,559 per driver in some urban areas - due to higher vehicle operating costs, traffic crashes and congestion-related delays. Increased investment in transportation improvements at the local, state and federal levels could relieve traffic congestion, improve road, bridge and transit conditions, boost safety, and support long-term economic growth in Illinois, according to a new report released today by TRIP, a Washington, DC based national transportation research nonprofit.

The TRIP report, “Illinois Transportation by the Numbers: Meeting the State’s Need for Safe, Smooth and Efficient Mobility,” finds that throughout Illinois, more than two-fifths of major locally and state-maintained roads are in poor or mediocre condition and 8% of locally and state-maintained bridges (20 ft. or more in length) are rated poor/structurally deficient. The report also finds that Illinois’ major urban roads are becoming increasingly congested, causing significant delays and choking commuting and commerce.

Driving on roads in Illinois costs motorists a total of $18.3 billion per year in the form of extra vehicle operating costs (VOC) as a result of driving on roads in need of repair, lost time and fuel due to congestion-related delays, and the costs of traffic crashes in which roadway features likely were a contributing factor. The TRIP report calculates the cost to motorists of insufficient roads in the Chicago, Champaign-Urbana, Metro East, Peoria-Bloomington, Rockford and Springfield urban areas. A breakdown of the costs per motorist in each area, along with a statewide total, is below.

“As the Chairman of the Senate Committee on Transportation, I am responsible for providing leadership on this issue that is vital to my district and people throughout Illinois,” said State Sen. Martin Sandoval, D-Chicago. “We have allowed these structural deficiencies to go on for too long. Now is the time for courageous, decisive action.”

“We are thankful to the TRIP team for clearly showing us how expensive this problem is,” said Illinois State Sen. Don Dewitte, R - St. Charles. “However, as a legislator, it is my duty to my constituents to work for a solution. It is time to give Illinois families financial relief and an increased quality of life through a bipartisan infrastructure investment plan.”

The TRIP report finds that 19% of major locally and state-maintained roads in Illinois are in poor condition and an additional 23% are in mediocre condition, costing the state’s drivers an additional $5 billion each year in extra vehicle operating costs, including accelerated vehicle depreciation, additional repair costs, and increased fuel consumption and tire wear. 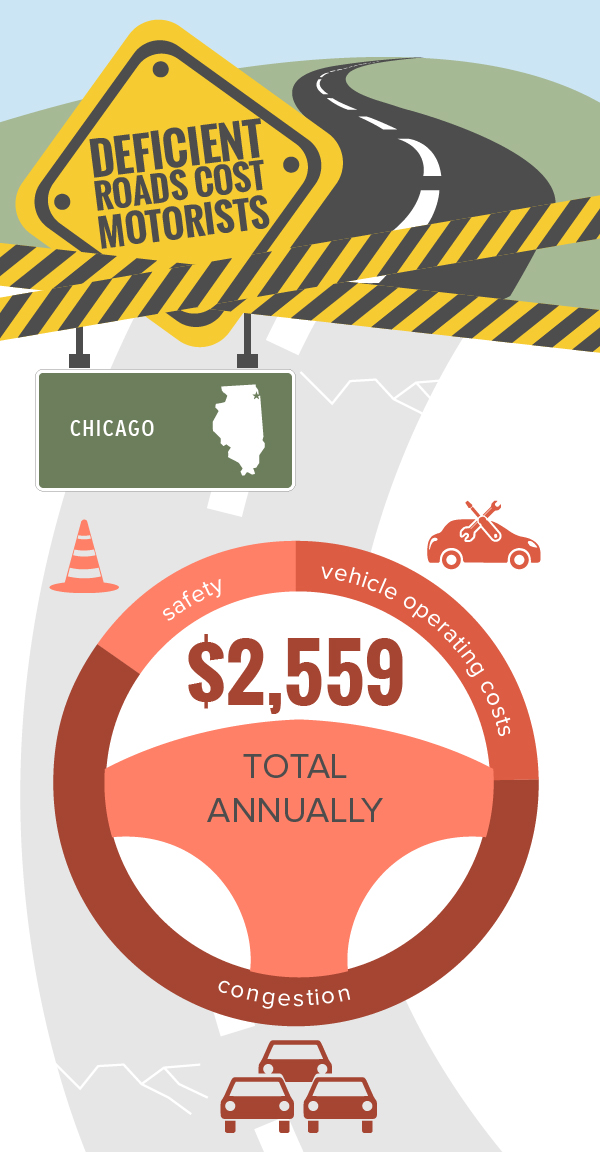 “The report breaks down what we have been seeing in my district for years – that deteriorating infrastructure, specifically on I-80, is costing our drivers hundreds of dollars and hours a year,” said Illinois State Rep. Margo McDermed, R-Mokena. “I am here today, on behalf of my constituents, who are losing time and money every day, to help provide leadership in calling for a bipartisan transportation program this session.”

Eight percent of Illinois’ bridges are rated poor/structurally deficient, with significant deterioration to the bridge deck, supports or other major components. The condition of state-maintained bridges in Illinois is anticipated to decline through 2023 based on current funding. Forty-one percent of Illinois’ locally and state-maintained bridges have been rated in fair condition. A fair rating indicates that a bridge’s structural elements are sound but minor deterioration has occurred to the bridge’s deck, substructure or superstructure.

“This report highlights how expensive it can be for Illinois drivers when the state does not maintain its basic infrastructure,” said Illinois Chamber of Commerce President and CEO Todd Maisch. “A stronger transportation system is vital to stronger business and a stronger Illinois. We must act now to improve our economy and quality of life in Illinois through infrastructure investment.”

The Illinois Department of Transportation projects that, under current funding levels, the percentage of state-maintained roads and bridges in need of repairs will increase significantly in the next five years.

“Poorly maintained roads are both a financial burden and safety hazard for Illinois motorists,” said Nick Jarmusz, midwest director of public affairs for AAA – The Auto Club Group. “The investments necessary to rebuild our infrastructure would cost a fraction of what drivers are currently paying in the form of additional vehicle expenses, to say nothing of the increased risk of crashes and injuries.”

Traffic Congestion, and Crashes, Only Getting Worse

Traffic congestion throughout Illinois is worsening, causing up to 63 annual hours of delay for the average motorist in the state’s largest urban areas and costing the state’s drivers a total of $8.5 billion annually in lost time and wasted fuel. 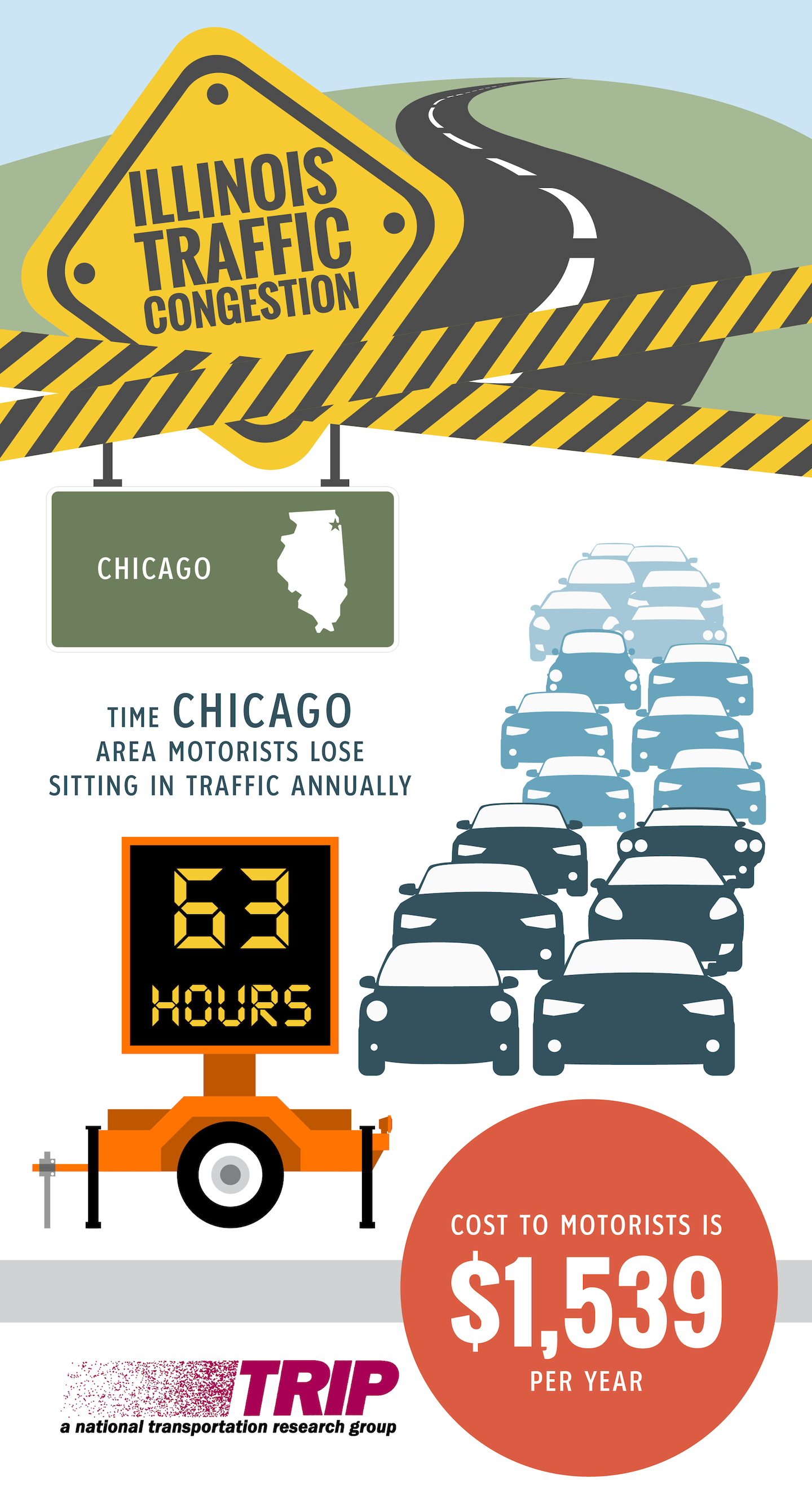 Traffic crashes in Illinois claimed the lives of nearly 5,100 people between 2013 and 2017. Illinois’ overall traffic fatality rate of 1.02 fatalities per 100 million vehicle miles of travel in 2017 is lower than the national average of 1.16. The fatality rate on Illinois’ non-interstate rural roads is approximately two-and-a-half times higher than on all other roads in the state (2.09 fatalities per 100 million vehicle miles of travel vs. 0.82). The financial impact of traffic crashes costs Illinois drivers a total of $4.8 billion annually.

“Chronic under-investment has led to a crumbling infrastructure exoskeleton, and has put the U.S. at risk of falling behind its international competitors,” said Ben Taylor, executive director of congressional and public affairs for the Great Lakes Region at the U.S. Chamber of Commerce. “That is why the U.S. Chamber has worked closely with allies like the Illinois Chamber to forcefully push for robust, sustainable, user-based infrastructure investments. Their successful stewardship of the Lock Box Amendment, that Illinoisans overwhelmingly passed in 2016, reminds us that voters support investing in our crumbling infrastructure. The time to act is now, and the cost of inaction could reach upwards of $7 trillion and destroy 2.5 million American jobs by 2025.”

The efficiency and condition of Illinois’ transportation system, particularly its highways, is critical to the health of the state’s economy. Annually, $2.9 trillion in goods are shipped to and from Illinois, relying heavily on the state’s network of roads and bridges. Increasingly, companies are looking at the quality of a region’s transportation system when deciding where to re-locate or expand. Regions with congested or poorly maintained roads may see businesses relocate to areas with a smoother, more efficient and more modern transportation system. The design, construction and maintenance of transportation infrastructure in Illinois supports 154,001 full-time jobs across all sectors of the state economy.

“These conditions are only going to get worse, increasing the additional costs to motorists, if greater investment is not made available at the federal, state and local levels of government,” said Will Wilkins, TRIP’s executive director. “Without adequate funding, Illinois’ transportation system will become increasingly deteriorated and congested, hampering economic growth, safety and quality of life.”