Next Insurance gathered and analyzed data from more than 50 U.S. cities to determine the best places for construction opportunities. 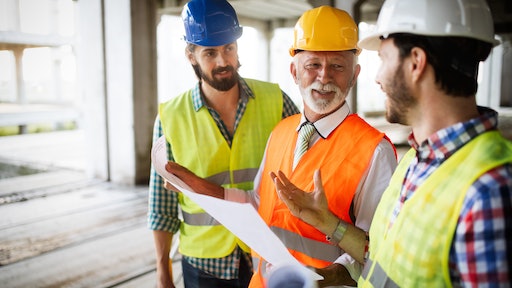 When the threat of the coronavirus pandemic caused construction sites to shut down, progress stalled on projects throughout the United States with no real way to make up for lost time.

Those constraints, combined with COVID-related revenue shortfalls in the public and private sectors, have had an unprecedented impact on the construction industry, with many experts predicting challenges that will continue into 2021.

However, there are also glimmers of hope. In many places, construction workers have gotten back to work on major projects that are helping to fuel local economies.

While it is unknown how long it will take for the construction industry to fully recover from the pandemic, several large, mid-size and small cities are poised to see potential growth as construction businesses settle into a new post-COVID reality.

But where, exactly, are these opportunities for construction workers?

Next Insurance set out to answer that question by gathering and analyzing data from more than 50 U.S. cities to determine the best places for construction work.

We looked at seven important factors to determine the best cities for construction work in the United States, including the number of construction projects in each city, the overall employment rate and the cost of living.

Chicago tops the list, while other Midwestern cities remain appealing for construction jobs.

When comparing more than 50 cities in our analysis, Chicago landed at the top of the list. The Windy City has numerous active local and federal construction projects — totaling in the billions of dollars.

More than 10 major redevelopment projects are underway in the city, including a few projects reshaping large sections of the city. For example:

For example, the $1.75 billion National Geospatial-Intelligence Agency campus broke ground in the fall 2019 and has an expected completion date of 2025.

It is also the number one small city on our list of best places for construction work (see more details in the section below). Kansas City, MO (16), and Milwaukee, WI (13) are also among the top 20, making the Midwest one of the most promising areas in the United States for construction jobs.

In San Jose, Google is moving forward with a new 80-acre mixed-use campus that should transform the western edge of the city’s downtown area.

A boom in multi-story residential construction in San Francisco is slowing, but several projects are still in early and mid-stages. A long-term waterfront redevelopment at Pier 70 will cost nearly $2 billion through 2028.

New York and Los Angeles are America’s two largest cities by population size, and they continue to experience growth with construction projects, despite the economic downturn.

While construction spending in New York is down from 2019 due to COVID-19, the total spent in 2020 still exceeds spending from eight of the past 10 years, according to the New York Building Congress’ construction outlook for 2020-22.

The report also predicts the number of available construction jobs in New York will increase steadily in 2021 and 2022, showing faith in the city’s ability to rebound and continue growing following the pandemic.

Los Angeles has several major projects already underway. Construction on the $2 billion Crenshaw Line is continuing through the pandemic, and will eventually provide people with a light rail option connecting South LA to the South Bay area. Construction is planned to finish in 2021.

The plan is for the Crenshaw line to eventually connect with the $4.5 billion People Mover system currently under construction at LAX.

These kinds of ventures are among a surge of construction projects that are planned to help showcase Los Angeles to the world when it hosts the 2028 Summer Olympics. 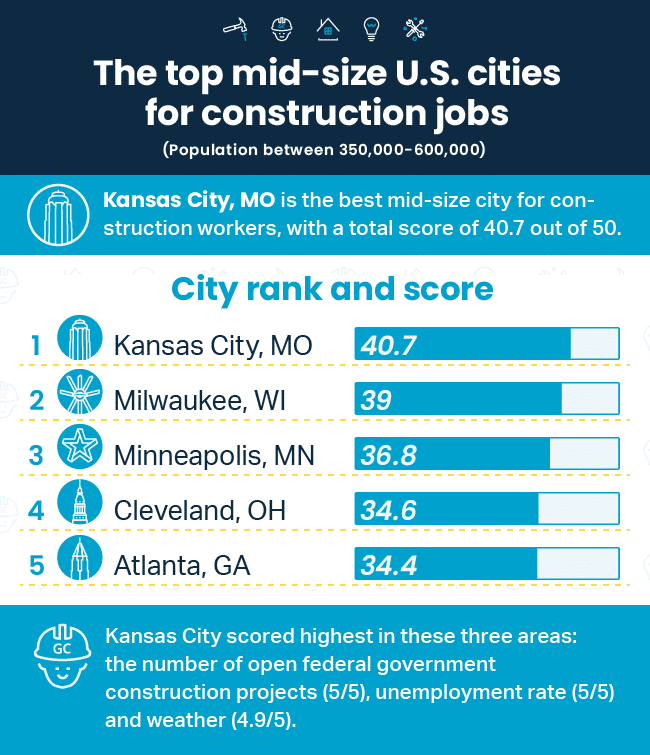 Next Insuranceincluding its metro area) was the only non-Midwest city in the top five.

These cities all provide numerous opportunities for construction work and competitive wages, all while being more affordable than larger cities like New York or San Francisco.

Why mid-size Midwestern cities rank high on our list

The most consistent factors that pushed these Midwestern cities to the top of the mid-size class is a combination of:

While there is no single reason the Midwest scores well in these areas, the region is continuing to shift away from industrial and agricultural jobs to more diverse industries. That could be playing a role in construction demand.

In addition to being the top small city for construction work on our list, St. Louis holds the number two spot on our list for all of the cities we evaluated — including much larger cities like New York, Los Angeles and Houston.

What makes St. Louis one of the top cities for construction work?

Salt Lake City is a hub for construction in the West

Salt Lake City was the runner-up in our analysis of top small cities for construction work, with the lowest unemployment rate of any city in our analysis and one of the top cost-of-living scores.

Even more encouraging for those in the construction industry, major projects are moving forward despite the pandemic, indicating that the city is committed to continued growth in the face of adversity. 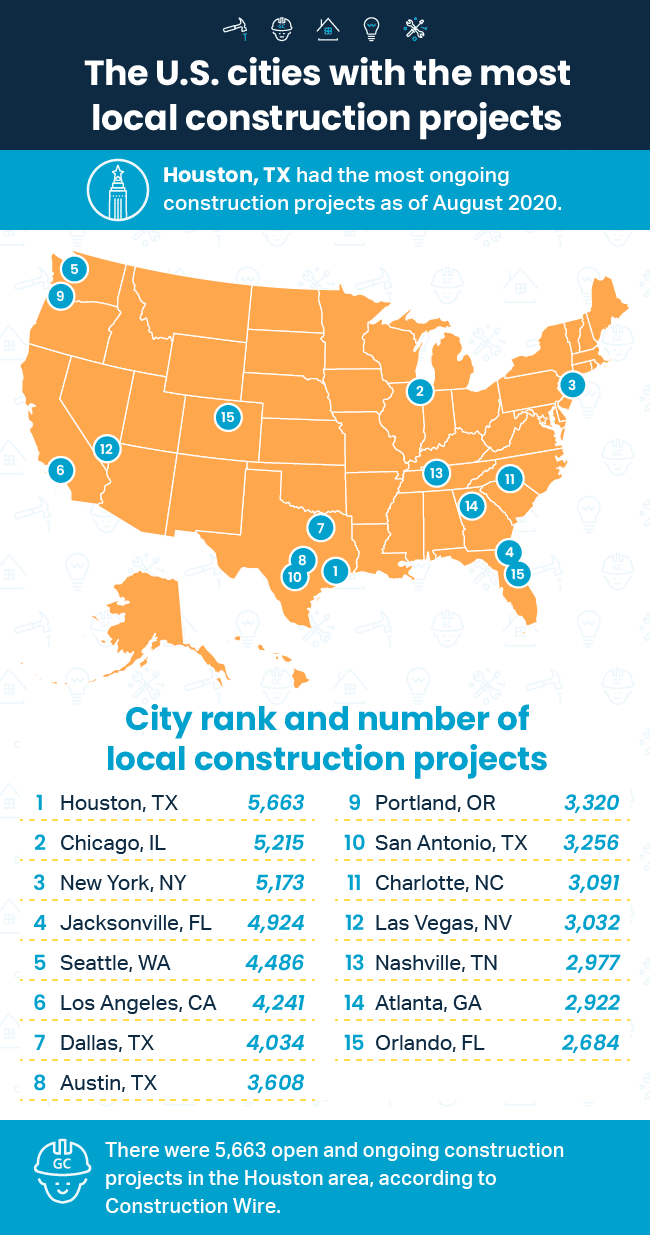 Next InsuranceThe cities with the most local construction projects

Using August 2020 data from ConstructionWire, we determined the top 15 cities with the most local construction projects. Unsurprisingly, some of the country’s most populated cities are at the top of the list — Houston, Chicago and New York.

However, there are a variety of other locations throughout the rest of the list, including smaller cities like Portland, Nashville and Orlando, in the top 15. This shows that smaller metropolitan areas also have strong demand for construction work.

The cities where construction workers are paid the most

How much someone can earn working in construction also is also an important factor in considering the best cities for construction jobs.

We used data from the U.S. Bureau of Labor Statistics to find out what the average annual salary is for construction workers in every city we evaluated. It’s not surprising that San Jose, San Francisco and New York top the list, considering that the cost of living in those cities ranks among the highest in the United States.

Of course, not all construction jobs are created equal. To get a sense of which cities are the best for workers in different construction trades, we analyzed cost of living information and data from the Bureau of Labor Statistics.

We used annual wage, job competition and jobs per 1,000 people employed to evaluate six different trades across the United States.

We found that the top-scoring cities vary from specialty to specialty, giving a diverse range of results. Still, a few cities showed up with impressive consistency.

Chicago is our top-ranked city for construction work overall, so it comes as no surprise to see that city appear on four of the six lists here. Even more impressive, however, is the performance of Boston, which is on all but one of the lists (sorry roofers, you might want to look elsewhere).

What’s next for the construction industry?

While there are numerous projects driving construction jobs throughout the country, the future remains uncertain as the coronavirus surges and retreats in different communities. A potential uptick in coronavirus cases in the late fall and winter could further complicate an already slow season for construction.

However, we know from the early days of the pandemic that construction businesses were some of the first to return to work. If there are more shutdowns in the future, the cities on this list could be the first to offer construction job opportunities when they reopen.

As a final note, the formula used to calculate the final rankings for these cities is dynamic, and based off of the specific cities used in each comparison. For that reason, the distinct rankings we created including only small or mid-size cities produce slightly different scores for those cities than when comparing all 51 cities in the full analysis against one another.