Celebration focused on delivering value to customers, quality and pride of workmanship throughout the remanufacturing process and improving environmental stewardship 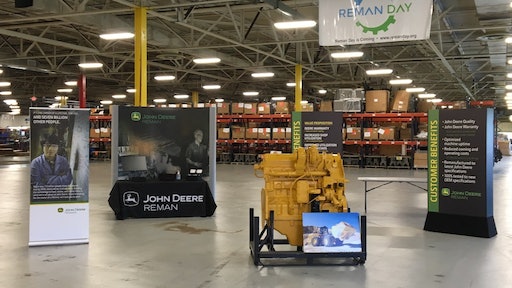 “It has been rewarding to see the continued growth and expansion of our remanufacturing business and John Deere Reman Day is way to celebrate those accomplishments while continuing to increase awareness” said Josh Kempel, Global Sales and Marketing Manager, John Deere Reman. “Our employees truly understand the value and impact of the remanufacturing process, and strive to serve John Deere customers throughout the equipment life cycle, while minimizing waste and making the most of resources.”

At the Reman facilities in Springfield, Missouri, the day bean with an emphasis on hazardous material collection. Crews were on site to collect and dispose of items such as paints, electronics, light bulbs, and oil. John Deere also invited local high schools to learn more about the remanufacturing process and how it benefits the environment. Students received a tour of the engine remanufacturing facility and learned more about various John Deere scholarship opportunities.

Recently celebrating 20 years since the program’s launch in Springfield, the John Deere Reman program has offered like-new exchange components since 1998. Previously sold, used or worn parts are restored from both a quality and performance perspective – and cost between 20% to 40% less than new parts. Remanufactured components such as engines, transmissions, axles, electronics and rotating electrical components are covered under a John Deere warranty.

Through the remanufacturing processes of these components, John Deere Reman has prevented over 125 million pounds of landfill waste in the last five years, reducing energy and raw materials consumption, thus safeguarding the environment.

Are Remanufactured Machines Worth a Look?

Most-read construction stories of the week include new John Deere Gators, OSHA increases civil penalty amounts, how to stop working if you aren’t getting paid, the infrastructure spend in Biden’s economic rescue, and more
Larry Stewart
January 22, 2021
Follow Us