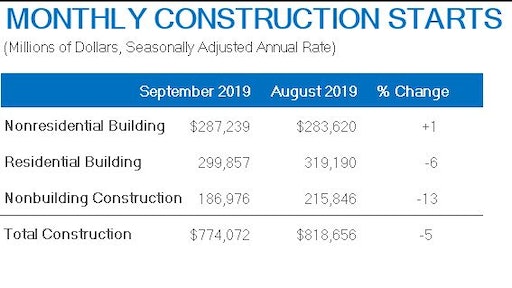 New construction starts moved 5% lower in September to a seasonally adjusted annual rate of $774.1 billion, according to Dodge Data & Analytics.

“Nonresidential building starts, meanwhile, rose a tepid 1% In September, the increase the result of a large consolidated rental car facility at Los Angeles International Airport breaking ground,” he noted, along with sizable manufacturing projects within the nonbuilding sector.

The September statistics pushed the Dodge Index lower to 164 (2000=100) compared to 173 in August, marking the lowest reading for the Index since May. Despite the month’s decline, the Index remains close to its 2019 average of 167.

However, nonbuilding construction starts are 4% higher year-to-date as a result of strong gains in electric utilities/gas plants.

“Large projects continue to make their presence felt in the monthly statistics, sometimes obscuring underlying trends,” stated Branch. “Nevertheless, construction starts have certainly throttled back in 2019 due to mounting uncertainty over the country’s economic health.”

Nonbuilding construction totaled $187.0 billion (at a seasonally adjusted annual rate) in September, a 13% drop from the previous month.

Starts in the miscellaneous nonbuilding category declined 32% from August to September. "Street and bridge projects lost 12%,” Branch added, “while the utility sector moved 10% lower and other nonbuilding declined 32%.”

According to Branch, the $994 million Cotton Belt Silver Line rail corridor was the largest nonbuilding construction project to get underway in September. The 26-mile rail line will extend from the Dallas/Fort Worth Airport in Dallas, TX, to Shiloh road in Plano. Also starting in September was the $720 million (480 MW) Maverick Creek Wind Farm near Eden, TX, and a $629 million reconstruction of a 5.5-mile stretch of I-75 in Troy, MI.

Through the first nine months of 2019, nonbuilding construction was 4% higher than in the same period of 2018 at $151.3 billion. Starts for electric utilities/gas plants were 132% higher year-to-date and environmental public works were up 2%. Miscellaneous nonbuilding starts, however, were 24% lower through nine months and highways and bridges were down 7%.

Nonresidential building starts inched just 1% higher in September to $287 billion (at a seasonally adjusted annual rate). The increase was a result of a 243% increase in manufacturing construction due to the start of a large automotive plant.

“On the plus side, the retail sector along with parking garages, warehouses and manufacturing buildings made gains in the month, while office buildings hotels, education and healthcare starts all moved lower,” Branch commented.

Year-to-date through September, nonresidential building starts totaled $215.0 billion, a 4% decline from the first nine months of 2018. Commercial starts were 6% higher pushed forward by the office, warehouse, and parking categories. Institutional construction starts were down 3% through nine months, with all major categories posting setbacks. Manufacturing starts were a sharp 39% lower year-to-date.

“Residential construction starts decline 6% in September with both single-family and multi-family activity moving 6% lower in the month,” said Branch. Residential building fell to $300.0 billion at a seasonally adjusted annual rate.

The largest multifamily construction project to get underway in September was the $228 million Lakeshore East – Cirrus Apartment Tower in Chicago, IL. Also breaking ground during the month was the $192 million Greenpoint Landing in Brooklyn, NY, and the $150 million The Eleven Condo project in Minneapolis, MN.

Through the first nine months of the year, residential construction starts were 6% lower than in the same period of 2018 at $238.3 billion. Single family starts were down 4%, while multifamily declined 11% year-to-date.