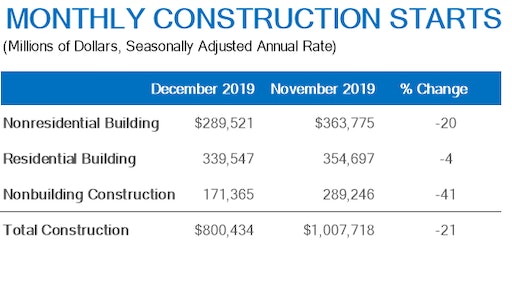 According to Dodge Data & Analytics, total construction starts in the final month of 2019 dropped 21% from the previous month to a seasonally adjusted annual rate of $800.4 billion. The sharp decline was largely a response to hefty gains posted in November’s utility and manufacturing sectors. When removing the influence of these two very volatile sectors, total construction starts only fell 3% in December. By major sector, nonresidential building starts fell 20% in December, while nonbuilding starts dropped 41%, and residential starts lost 4% over the month. 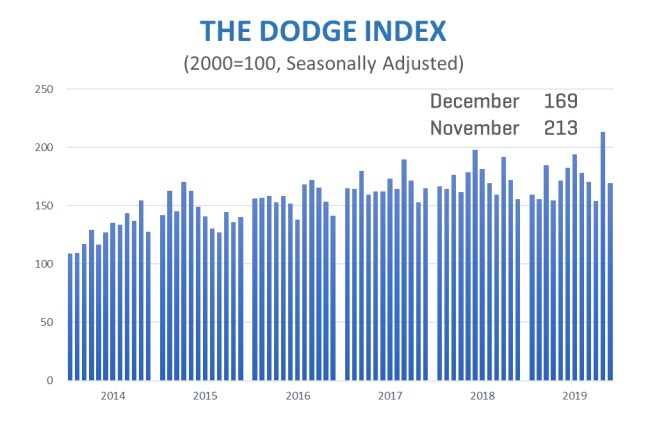 For the full year, total construction starts were essentially flat when compared to 2018 at $817.6 billion. In 2019, nonbuilding starts gained 7% due to large gains in utility starts, while nonresidential starts fell 1% and residential starts declined 3%. Removing the massive 112% gain in utility starts from the total would result in total construction declining 3% from the previous year.

“Last year (2019) will go down as one of the most volatile years for monthly construction starts due the lumpy nature of large projects,” stated Richard Branch, Chief Economist of Dodge Data & Analytics. “Looking beyond the influence of these massive projects, it is evident that the uncertainty surrounding trade policy weighed on construction activity last year.” 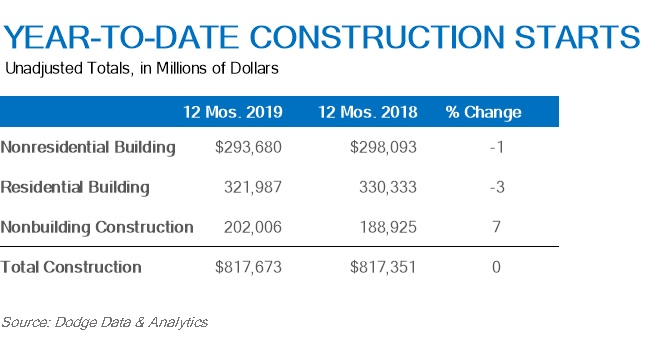 Nonbuilding construction fell 41% in December to a seasonally adjusted annual rate of $171.4 billion following an extremely strong November, which saw the start of several large projects. The only category to post a gain in December was environmental public works, which increased 1%. Starts of electric utility/gas plants fell 76%, while highway and bridge starts fell 18% and miscellaneous nonbuilding starts dropped 17% from November to December.

Nonresidential building dropped 20% from November to December to a seasonally adjusted annual rate of $289.5 billion. The main reason for the decline in December was a 93% decline in manufacturing after a large petrochemical plant broke ground in November. Institutional starts rose 6% over the month fueled by gains in healthcare and recreation. Commercial starts rose 5% in December due to solid gains in warehouses and parking structures.

Residential buildings starts fell 4% in December to a seasonally adjusted annual rate of $339.5 billion. During the month single family starts lost 7%, while multifamily posted a tepid 1% gain from November.

The largest multifamily structure to break ground during the month was the $470 million 1000 Michigan South Loop Condo Tower in Chicago IL. Also starting in December was the $215 million Koula Mixed-Use Tower in Honolulu HI and the $170 million Alta Xmbly Block 23 facility in Somerville MA.

For the full year, residential starts were 3% lower than in 2018. Single family starts ended 2019 down 1%, while multifamily starts lost 7% for the year.