Tennis court work could be a good fit for your lineup of asphalt pavement services. 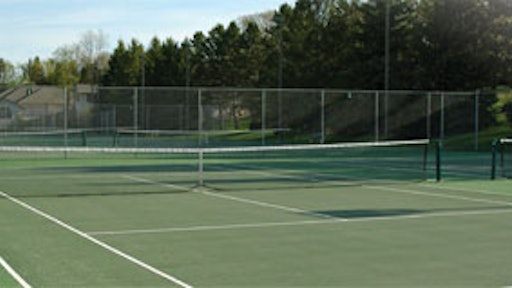 If your company already offers sealcoating and line striping, you might want to consider adding tennis court maintenance to your lineup of pavement services. Tennis court surfacing and striping is a logical extension of the skills you and your crew already possess. Many paint and sealcoating suppliers offer the materials you will need for these jobs and can be a good source for advice when starting out.

Tennis court work, however, does require additional knowledge and the patience to meet the high standards set by your customers, but in the end it has the potential to pay off for you.

"Contractors just looking to consider tennis court work sometimes are scared off by the price," says Jeff Gearheart of SealMaster. "When you see driveway sealer for $1.50 a gallon, and then you see tennis court surfacing at $8 or $9 a gallon, some people might not want to make this initial investment, but they get so much more money for the area they are doing."

"Money wise, we've done quite well," says Brad Buck, partner at C&B Buck Bros. in Holland, OH. "If we're slow in one area, the tennis court striping seems to pick up some of that. I do a lot of six-court areas, and for a school system it takes seven days to do it. So that's seven days that my guys have more work and we've got other crews who are out sealing driveways and parking lots."

J&S Asphalt in Rocklin, CA, has been working on tennis courts since the late 1980s and has their own tennis court crew that does surfacing, striping, and building. President Roy Sampson says the tennis business has been successful for his company, too.

"It's a niche," he says. "There aren't a lot of people who do it and for us there isn't a lot of competition."

Tennis court work isn't just for anyone, however. The crews working on these jobs need to be very meticulous. School systems and private clubs will use these courts for competitive play, and homeowners who have a tennis court in their yard certainly want it to look as close to perfect as possible.

"You can get away with a little more when you're doing driveways," Gearheart says. "But with tennis courts you have to be very careful and very clean or you could run into costly repairs."

If you're familiar with the process of mixing and placing driveway sealer, tennis court surfacing material will be easy for you to adjust to. Just follow your manufacturer's directions for mixing and placing. There are a few different layers involved in the process, and not all of them are necessary in every situation.

On a new court, let the surface cure for two to four weeks before working on it. When ready to start working on a court, clean the surface using blowers, wire brushes, or any other tools necessary for a successful sealing environment.

Check your court for "bird baths," areas where water remains on the court one hour after it stops raining or after you flood a court. There are two approaches you can take to leveling off a court that holds standing water.

If you're surfacing an asphalt court that isn't brand new, you'll probably have some cracks that need filling. When and how you address those cracks will vary depending on your customer, because there's really no cosmetic way to fill cracks.

"To make repairs on a tennis court is very noticeable, so typically people wait until it's time to resurface the entire court before they make any type of repair, unless it's something that is going to cause failures to the court during that period," Sampson says.

Buck says the school systems in his area aren't putting in new courts, instead they're maintaining the ones they have.

"I'd say they need to be resurfaced and restriped every five years. The two school systems we have around here are on a maintenance program," Buck says. "We go in every year to fill in the cracks, because you're not going to get rid of the cracks once they're in there. You can hide them, but we go in and fill them with the filler. You have to make sure that the filled cracks don't stick out because you don't want kids tripping on them."

A leveling coat should be used if it is the first time the court has been surfaced. This will create a smooth surface for the color applications. The leveling coat is also necessary if patchwork has been done or if the surface is rough. On a court resurfacing project, it is acceptable to skip this step if the surface you are working with is smooth and in good condition.

Color coatings are available in pre-mixed formulas and concentrated formulas that require mixing. If you're using the concentrate, you can dictate how much water and sand goes into your mix. Be aware that the amount and size of sand used in the mix has a very important effect on the finished product.

"The speed of play is controlled by the amount and size of sand — the mesh of sand," Sampson explains. "If there's not a whole lot of sand in the material, it's a fast court; if there's a lot of sand in the court it's a slow court. It's a lot easier to practice and play on a slow court, and if you're an older client you might want a slow court because you can't always get to the ball. The sand actually grabs that ball and it really slows down the speed of play. A high school court will typically be a medium-play court, and homeowners themselves will be pretty particular about that."

The color coat will typically be applied in several coats. Wait for each coat to dry before applying the next, typically four hours.

When working on an indoor court, there are a few things you need to keep in mind during the various steps of the surfacing process that can be different from outdoor work.

"We did a job in Pennsylvania last year that was a tennis racket club inside a building, our first time inside, and there were some different aspects in that," Buck says. "The evaporation of the sealer takes a lot longer to dry, and then you can get condensation on the beams and lights, so you'll probably get some dripping from the ceiling, which you don't have to deal with when you're outside. But then again when you're outside you have the weather to deal with and when you're inside you don't."

You can begin striping a court after the color coats have cured, generally 24 hours. Striping a tennis court demands great attention to detail. Lines are not generally placed with a walk behind striper. Instead, most contractors use a tape machine that rolls out two perpendicular strips of masking tape, leaving a space in between to apply the paint. When you pull up the tape, your line is crisp. There are sealers available that you can apply to the junction of the pavement surface and the tape which ensures that there will be no paint bleeding underneath the tape.

"Most people do tennis court striping by hand, just because customers are so picky about the finished job," explains Gearheart. "There are some people who use a machine, with or without the tape machine, and they can do a very good job. But when you do it by hand you don't have to worry about the wind or overspray."

Tennis court lines should be 2 inches wide. The baseline should be between 2 inches and 4 inches wide. All court measurements should be taken from the back edge of the painted line (the edge of the line furthest from the play area). Courts will generally be striped for doubles play, which also includes the lines for singles play. Court dimensions can be found in manuals, on the Internet, and are often available from the supplier of your court surfacing materials.

"Our contracts always say 'stripe to official USTA [United States Tennis Association] layout'," Sampson says. "We have to have tolerances, about a ¼-inch we can be out if need be."

A doubles court is 78 feet long and 36 feet wide. Within that court are lines for singles play, at 27 feet wide and 78 feet long. When measuring for layout, use two 100-foot tape measurers of the same make and model.

Start the layout by establishing the line along which the net will follow. This line is generally not striped on a court, but it will give you points from which to measure out all other lines. Find the center point between the two posts and measure 18 feet toward each post. Mark each of these points. This will give you 36 feet of playing width.

From those end points on the net line you can find the four corners of the court. Measure from one of those points down the sideline 39 feet, and from the other end of the net line measure to the opposite corner 53 feet and 7/8ths of an inch. Where the two tape measurers intersect is a corner of the playing area.

Use this method to find each corner. When you've found all four corners you will have a 78 foot by 36 foot playing area. Service lines, alleys, and center marks are easy to find after that.

After the paint has dried and you have removed the tape to reveal crisp boundary lines, hand your customer his racket and toss him a ball!

Turf striping is a bit different than the tennis court world. Many youth sports groups, city recreation departments, school systems, or college and professional teams have their own field striping equipment. Some contractors, however, do incorporate these services into their companies, whether they work for a school system, a city department, or other group that demands field striping. Having a connection with a city or a school system can lead to work in other facets of your company, such as parking lot striping or sealcoating, so it's oftentimes a valuable relationship. Keep in mind, however, that sports striping requires a demanding time frame — a field needs to be striped by the time a scheduled game starts play.

Fields generally have to be striped once a week, however this is dependent on the frequency in which the grass is cut and the use of the playing field. Turf striping can be done with different kinds of striping units designed specifically for turf striping, including aerosol can, variable pressure, or fixed pressure units. For the pavement striping contractor, there are airless units on the market that can be used on both pavement striping and grass striping, available with parts kits to maximize your machine's effectiveness on grass.

When choosing paints for sports striping, it's good to look for high-quality features such as high titanium content (for brightness), pre-straining, and a paint that won't "settle out," or separate.