Bulldog Magazine was launched in 1920. 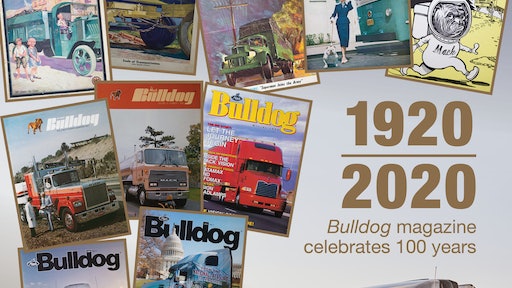 Mack Trucks’ Bulldog Magazine, one of the oldest corporate publications in the U.S., celebrated its 100th anniversary with a special June issue that looked back at the publication and Mack’s 120-year heritage.

“Mack was already a 20-year-old company when Bulldog Magazine was launched in 1920,” says John Walsh, Mack Trucks vice president of marketing. “This special issue spotlights past customers and covers, as well as showcases the role Mack played in establishing today’s trucking industry through its products and advocacy.”

The magazine started in 1920 as a means to share critical information to customers, employees and salespeople describing how Mack products worked and what design was best suited for each job. The publication kept readers informed about products, services and trends, while also educating its audience with in-depth stories about everything from the role of trucks in society to powertrain trends.

In addition to the new, the special issue of Bulldog features historical information about customers previously written about in the publication and past covers. Also included is a 1923 column by then-Vice President Norman Halliday that predicts the modern interstate system.

Publishing of Bulldog was interrupted during significant events, such as the Great Depression and World War II, but Bulldog returned to full publication in 1947.