After record 10,408 attendees and 563 exhibitors, the show will return to the Indiana Convention Center in 2013 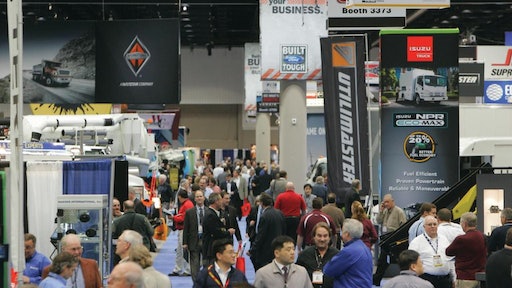 The Work Truck Show 2012, held March 6-8 at the Indiana Convention Center in Indianapolis, was the biggest work truck event in history, breaking records for attendance, exhibitor participation and product launches. More than 10,400 attendees explored over 500,000 square feet of work trucks and equipment from 563 exhibitors.

The Work Truck Show 2012, held March 6-8 at the Indiana Convention Center in Indianapolis, was the biggest work truck event in history. It broke all standing event records, with a verified 10,408 attendees checking out work trucks and equipment from 563 exhibitors.

"This is the second year in a row that The Work Truck Show has achieved new records for attendance, exhibitor participation and product launches," he says. "We will build on this momentum as we prepare to bring an even bigger Show back to Indianapolis for an unprecedented third straight year in 2013. In response to growing demand, we're expanding next year's Show floor - and have already sold 92 percent of available space."

Other Work Truck Show 2012 highlights included a sold-out President's Breakfast and 48th NTEA Annual Meeting on March 7, with keynote address by President George W. Bush. During the President's Breakfast, Jim Carney, NTEA senior executive director, was recognized for his 36-year career with the NTEA. He will retire April 30.

VIA Motors Drives Away with Work Truck Show 2012 Green Award