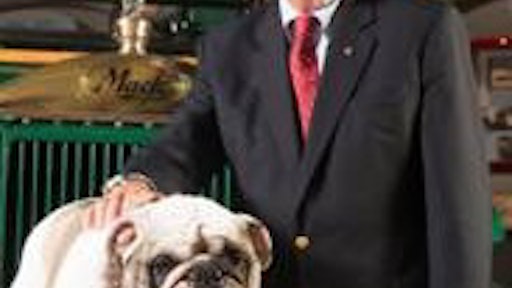 The iconic Mack Bulldog hood ornament is celebrating its 80th birthday - or an estimated 560 dog years. A patent for the hood ornament was granted on October 11, 1932.

The Bulldog first became associated with Mack Trucks during World War I. British soldiers nicknamed the Mack AC models used in the Allied effort “Bulldog Macks” because of their tenacity. The Bulldog moniker stuck from that point on.

Years later in 1932, Alfred Fellows Masury, a chief engineer at Mack Trucks, was in the hospital for surgery. Not one to be idle for long, during his recovery, Masury hand-carved the first model of the now iconic Bulldog hood ornament out of a bar of soap.

Once released from the hospital, Masury applied for a patent on his design. The patent was granted Oct. 11, 1932. Masury was killed in the crash of U.S. Navy airship Akron in 1933, the same year the Bulldog hood ornament began adorning Mack trucks. The hood ornament functions as a grip for opening the hood of the truck.

“For 80 years, the Bulldog hood ornament has been a symbol of the durability and reliability customers expect from Mack,” said Kevin Flaherty, president, Mack Trucks North American Sales & Marketing. “We’re proud of our heritage and that the Bulldog has become so widely recognized – and we tip our hats to Alfred Masury for his contribution to our legacy.”