Asphalt-Printing Drones Could Be Solution to Potholes

Researchers have "trained” image recognition algorithms to detect potholes and then installed them into drone cameras. After the damaged areas were identified, a drone is dispatched to the site, using an on-board asphalt 3D printer to patch the hole. 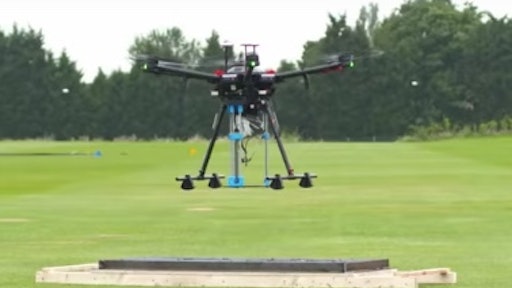 University of Leeds researchers have proposed and developed an unorthodox approach to pothole repairs.

They “trained” image recognition algorithms to detect potholes, and then installed them into drone cameras. After the damaged areas were identified, a drone was dispatched to the site, using an on-board asphalt 3D printer to patch the hole.

Intriguingly, while it may rightfully seem a bit overkill to use complex algorithms, drones, and 3D printers to patch potholes, researchers say this may actually save municipalities money in the long run. Phil Purnell, professor of Materials and Structures at the University of Leeds, told Digital Trends: “When you look at interventions in infrastructure — whether it’s roads, pipes, bridges, or similar — you’re very often using ton and meter-scale solutions for problems that started out as gram and millimeter-scale defects,” he said.

Researchers University College London, who have built the asphalt extruder mounted on the Leeds drone, say that the patching has an accuracy of about 1 mm.

This is not a singular approach — it’s part of a multi-university project looking at the possibility of self-repairing cities, using robotics and modern technology to repair and maintain infrastructure.